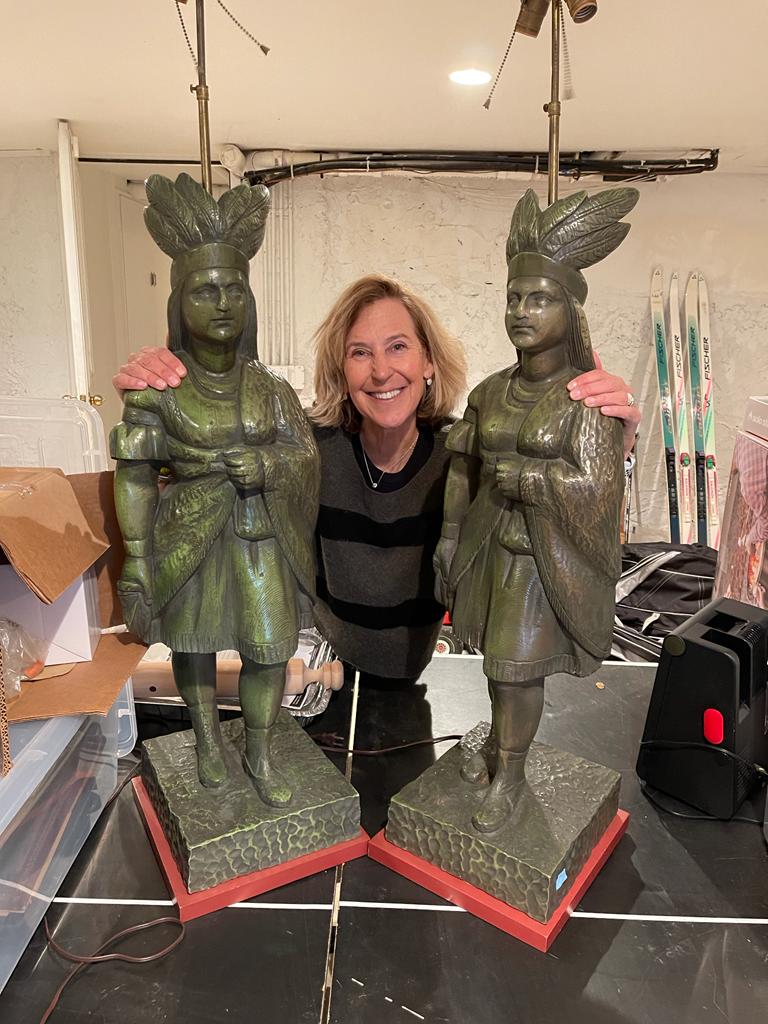 Nana’s Ladies In the Basement: My Spring Cleaning Dilemma

My Nana’s lady lamps are old. I mean really old. Like older than vintage —- more like antiquated. They are so out of the box inappropriate now and def not PC. When I show them to anyone who will listen, anyone who will entertain nostalgic conversations about junk and guilt, I watch their faces waiting for them to say, “those are so cool, you can’t throw them out.” But no one ever does.

They weigh 50 pounds each. The base is concrete. These are towering figures of “native american women” with lampshades on their heads.  I believe she bought them in Soho in NYC in the 1940’s. Do I offer them to a museum or haul them to recycling?

Twenty years ago when my Nana Edith passed, we had a family lottery.  I totally scored getting those “Indian” lamps which we called them back then. I put them up at our ski cabin where they lived for 10 plus years. After the Vermont ski house got sold, newly married, I hauled Nana’s Indian lamps to our Boston condo where they dominated the living room. I liked having memories of my Nana with me. I guess that’s why we hang on to our “mementos,” they evoke sweet remembrances.  These historic ladies made a statement. But then we sold the condo and and now, the lamps sit in the basement on the warped ping pong table warped from too much beer pong. What the hell do I do with them?

“Decision time Felice. In or out! It’s time! Clean out this living storage unit,” I chide myself.

The basement is full of fencing gear, 8 snow boards, the ski pole that kept my first husband from falling into a crevasse in Chamonix as it lodged horizontally where he was suspended between life and the depths until he was found by his cousins in the alps.

I threw away the slides of my Dad and Mom from the 1950s. That wasn’t easy to do. I borrowed a light box, which was a relic, because the slide projector, also a relic, was jammed. I begged my sister for those slides when she threatened to toss them during her move. But the guilt just got transferred and I threw them out. I just tossed that piece of history and no one will ever know what skiing in Val D’isere on wooden skies and lace up boots with wool Austrian sweaters looks like.

But the lamps are not a one off issue. Every piece of stuff in this old house holds a story.  And that’s the issue. As I try to drill down to the psychology of storing, saving, and accumulating I am convinced that as we grow older, there is a sense of erasing the past by tossing our memorabilia.  I think it may be time to have a talk with those ladies in the basement and let them know they may be goners but they will not be forgotten. I will take a photo of them and move them on out.

But wait, maybe I should wait til the kids come in two weeks and ask them one more time if they have interest in Nana’s ladies.

Nana’s Ladies In the Basement: My Spring Cleaning Dilemma was last modified: April 3rd, 2022 by felice