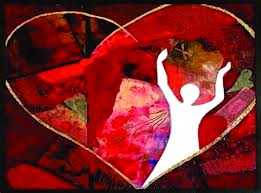 My First Valentine’s Day as a Widow

It was my first Valentine’s Day without my husband.  His death, almost a year earlier, still felt raw at times, but life was beginning to be whatever it was suppose to be.  I was learning to live alone and slowly adjusting to this new sense of normalcy.  And even with all of that said,  it wasn’t easy to escape the pressure of my first Valentine’s Day as a widow.  It wasn’t romance that was on my mind, far from it, instead it was the memories of those special moments with him that were now forever lost.  I didn’t want to spend the evening by myself.

When the invitation came for dinner, I jumped at it.  Even though the invite was from my support group members and not exactly people I would label close friends,  the dinner would get me out of the house and out of what I felt was the beginning of a rough time.

About 10 of us showed up at the Italian restaurant.  We sat at one long table and when the last order was placed, our group leader motioned for the waiter to see her.  Looking serious and very intently at our oh-so-young waiter, she informed him that we were a bunch of widows and that he should treat us nicely since it was Valentine’s Day.  As soon as she spoke those words, every maternal bone in my body ached to run up to that poor guy, give him a hug, and tell him that it was ok, he really didn’t have to feel so sorry for us.  Instead I just stayed glued to my seat with my eyes cast down.

I have never been able to think quickly on my feet and that night was no exception.  When I heard her  words, my first thought was simple.  How dare she?  I am a private person who has never felt the need to proclaim my marital status or lack thereof to anyone.  If I want to share something with you, I’ll make that determination.  Like most people, I don’t want my personal business out there unless I say so.  Period.  My group leader’s behavior shocked me.  Her tone, her words  — all screamed pity.  We were not a table of women to be pitied;  we were a table of women to be praised.  We were learning to put one foot in front of the other and keep moving ahead.

And the waiter?  He never said a word.  And truthfully, what could he have said?  Looking back on that night almost 12 years ago, the person who I am today would have said something to that insensitive woman.  I would have pulled her aside and in a private conversation let her know that playing the pity card is never ever the graceful thing to do.

Aside from that one outburst, the rest of the evening was rather uneventful; in fact, it’s hard to remember any of it except that I made the obligatory small talk with the women sitting near me.

I survived the dinner, a thoughtless proclamation, and my first Valentine’s Day without Chuck.  I also made a promise to myself later that night that pity would not be part of my agenda and that I would do my level best to push it as far away from me as possible.  It really  doesn’t wear well at all.

My First Valentine’s Day as a Widow was last modified: February 12th, 2013 by Marian Wood