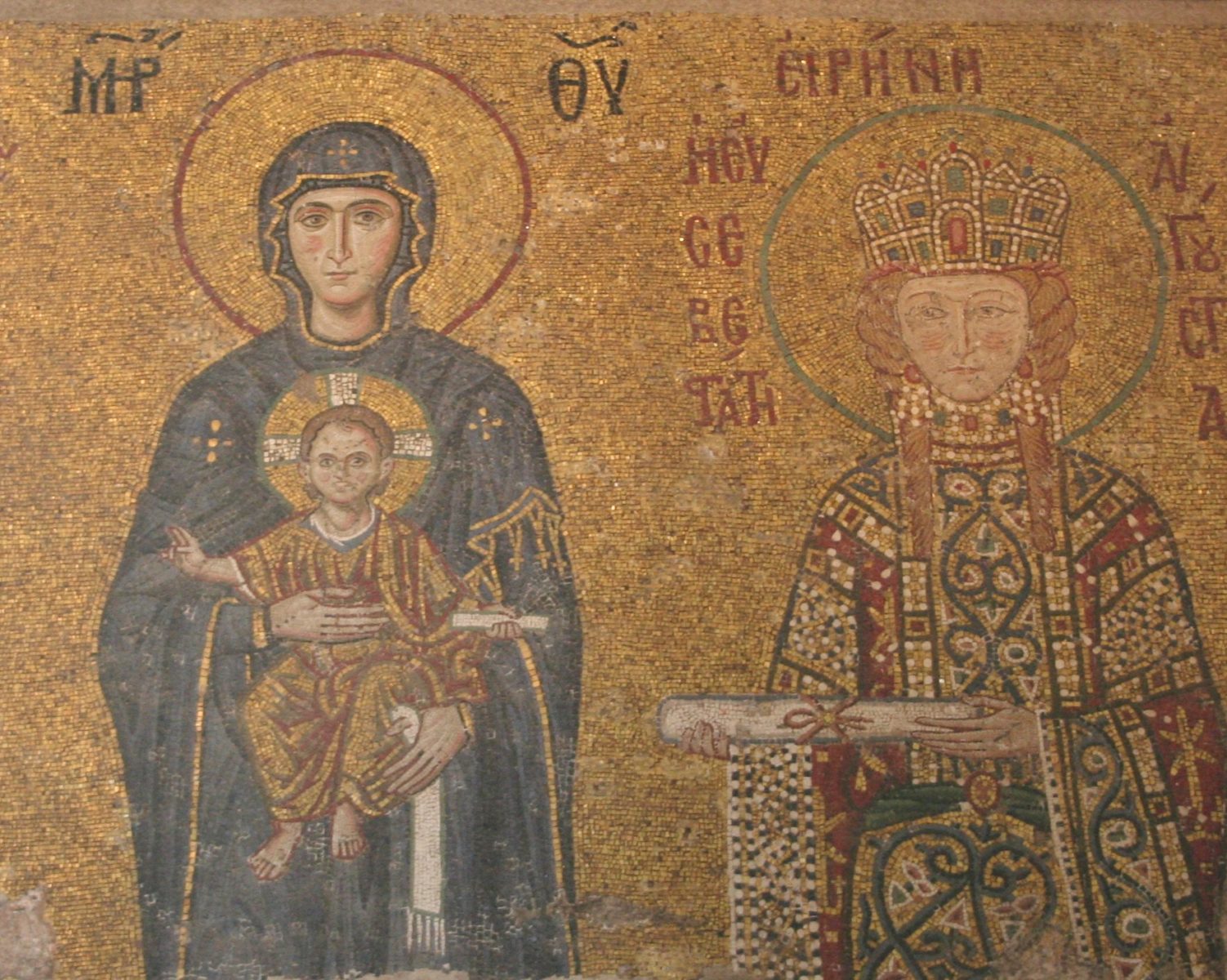 Even for a veteran travel writer, the prospect of visiting Istanbul thrilled me. Istanbul, after all, is one of those words that shimmers with exoticism, bringing to mind whirling dervishes, cruises on the Bosphorus, the Sultan’s Palace, and the Grand Bazaar. As someone who specializes in spiritual travels, I knew there was one place I wanted to visit most of all—Hagia Sophia, that legendary holy site honored in both Christianity and Islam.

Hagia Sophia—stately, grand, and imposing—did not disappoint. But what I find myself remembering most vividly is a woman whose image reached out to me across more than a millennia. To me, she symbolizes the power of that holy place and the way that on our travels, time sometimes telescopes so that the past is not past at all.

Built on the remains of two previous churches, Hagia Sophia, the Church of Holy Wisdom, was the foremost wonder of the Byzantine Empire.  Completed in 537 AD, it was here that emperors were crowned and the Fifth and Sixth Ecumenical Councils met to chart the theological course of Christianity.  Though sacked by crusaders in 1204 and shaken by numerous earthquakes, for nearly a thousand years it reigned as the preeminent cathedral of Christendom.

After Mehmet II conquered Constantinople in 1453, the church became one of the great mosques of the Muslim world.  Its holy relics were removed, inscriptions from the Koran were added to the interior of its great dome, and four minarets were added to its exterior.  In the mid-nineteenth century, six large discs bearing the names of God, Muhammad, and the first caliphs and imams were inscribed to its interior, completing the building’s unique blending of the iconography of two faiths.

Since 1935 Hagia Sophia has been a museum, which given the complicated religious history of Turkey I guess is probably a necessary compromise. It is a building in need of constant repair, with perpetually peeling plaster and acres of cracked marble. It has too many people tramping through it who see it as just a museum and not as a place of worship.  It is poorly lit and it echoes with the voices of visitors.

And yet, when I think back to my two visits to Hagia Sophia (for I had to go twice, since once was not nearly enough), the memories that come to my mind are suffused with beauty.  Hagia Sophia is like a once-alluring woman whose face is now ravaged by age, but whose loveliness is still mesmerizing.

And nowhere did that loveliness blaze more brightly than in a mosaic that features Irene of Hungary, a 12th-century saint beloved for her piety, generosity, and kindness.

Standing amid the bustle of tourists, I found myself transfixed by this work of religious art. The mosaic depicts Irene standing with the Virgin Mary and Christ Child and Irene’s husband, the Byzantine emperor John II Comnenus. Made of tiny pieces of colored glass, it seemed to have a rippling, luminous quality, its character changing subtly as the light shifted across its surface.

As we stood below the mosaic and gazed upwards, my eyes kept returning to St. Irene’s face. All the characters in the mosaic have a stiff formality, but they are also individualized. I could tell St. Irene was a Northern European by the blonde braids that framed her crown. And those elaborately embroidered robes!  Byzantine dressmakers had a love for color and style, certainly.  As both a saint and an empress, Irene clearly had the pick of the closet.

There was something else that intrigued me about this mosaic: St. Irene is shown holding a scroll. I remembered reading in Judith Herrin’s Byzantium: The Surprising Life of a Medieval Empire, that important women like St. Irene were often shown with scrolls in their hands, for imperial and high-ranking women in Byzantium were normally well-educated as well as influential.

I loved the way St. Irene’s wisdom and beauty still shines forth in Hagia Sophia today. She has remained there as Constantinople became Istanbul, Byzantium the Ottoman Empire and centuries later morphed yet again into the modern republic of Turkey. Through it all, she has remained elegant and serene, bearing witness to the fact that good-hearted women have shaped history as well as powerful men.

In my travels I have often found that a holy place has the power to make time disappear. In Hagia Sophia, I learned that it can also bring to life, even for a few brief moments, the charisma of someone long dead.

Lori Erickson writes about inner and outer journeys at http://www.spiritualtravels.info/.