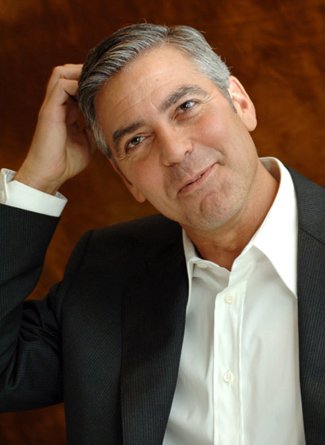 Please raise your hand if you have ever had a fantasy of marrying George Clooney.

I have taken a poll among my many curiously deranged, off-balance girlfriends who very often find themselves dancing, or in some cases, swaying, to the beat of their own iPod in the middle of the night.

Each one, honest to god, has a similar fantasy. Mine goes like this.

You slip out of bed, and find yourself standing in front of the bathroom vanity mirror: The puffy droopy eyelids, along with the ever-so-slightly sag in the jowls – and you understand on a cellular level how Faye Dunaway was able to turn herself into a radioactive trout. First, it was the eyes. Let’s pull and tuck them tightly (with adding the glamour of scotch tape) so that they appear to no longer be in the center of the face. Let’s take the nose, which at one time was so perfect and straight, and now expand the nostrils so they can hide canned goods incase of a nuclear meltdown. And now the lips, it’s always such a tragedy when the mouth starts to take on the form and shape of a six-lane freeway. Why oh why do we women do this to ourselves? Really, what is the point? Because we want to get hired as the ingénue, the sexy hot babe. Hey, I’ve got news for you – we are sexy hot women, but we’re all botoxing ourselves into non-expression frenzy mode. I mean really – what is so sexy about a shiny forehead that only seems to move when you jerk your arm?

Back to my fantasy.

I go into a bar. There are a few scattered customers. Mostly drunk out of their gourd, mumbling, wobbling, and peeing in their pants. I order a cosmo, straight up, which really means cranberry juice with a twist of lime. I get up from my bar stool and saunter over to the jukebox. I play Laura Nyro and Ricky Lee Jones. I, for one, want to hear women sing about rejection and pain and unrequited love and abortion and guys named Chuck-e who yes, are in love.

And then he walks in.

Makes himself comfortable at the end of the bar. Orders a beer. Fiddles with his brand new sleek black sexy iPhone. He looks at me. I look at him. He looks at me again. I mouth, “Hey… want my number?” in perfect Italian. He looks at me in his Clooney kind of way, eyebrows tilting up, eyes looking down…a smirk…he nods. Then he slides the iPhone ever so gracefully – landing right in front of me. I punch in my ten-digit number and add a smiley face with a wink, sliding it right back to him.

“Hey,” he says, “You have three sevens in your number, that’s lucky.”

Nine months to the day I give birth to our first child, whom we name Dolores Claiborne Clooney. She dies three days later under mysterious circumstances. Then I fall into a coma. And stay in a vegetative state for eight years. The only people who seem to visit me on a regular basis are Robert and Mary Schindler, Terri Schiavo’s parents, who petition to adopt me. I vaguely remember hearing someone – possibly a nurse, or an attendant – saying that George thanked me at an Oscar ceremony. He didn’t mention me by name, but did refer to me as ‘his coma girl.’

I end up on the cover of Time Magazine, as “Vegetative Person of the Year.”

I wake up from my coma; George and I inevitably divorce. Amicably. I open a fast-food vegan restaurant, called Vegetative Taste, with a drive-through for hybrids only. It becomes a franchise, and I am awarded the Nobel Prize.

I am jarred by the sound of an alarm clock.

My husband, Ken, upon waking, turns to me, “What’s with the scotch-tape?”

He cannot relate at all to my fantasy life with George.

(Please, help a menopausal woman get to Broadway… you can donate here)