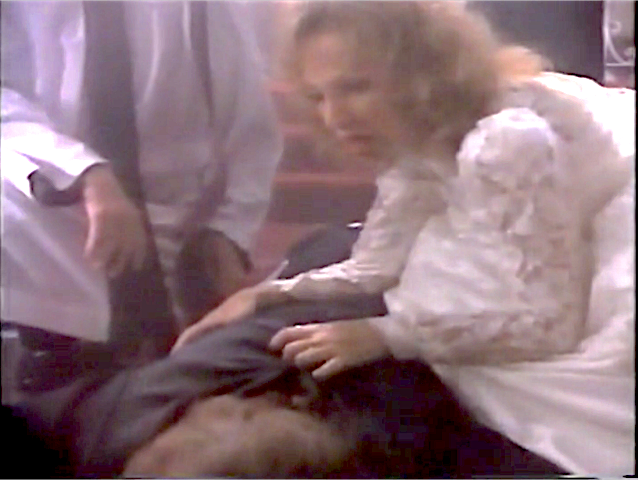 Many Weddings, Many Kids

I’ve been married many times and mothered many children. I’ve walked down three aisles and ran headlong down another. I‘ve worn many wedding gowns, and endured labor with a husband Lamaze’ing by my side.

I’ve never been divorced, a mother, nor a bigamist, but this is not a riddle. In real life, I didn’t get married until I was 65.

As a lifelong actress I went through the many phases of courtship, nuptials, child rearing and relationships scripted. My ceremonies were cluttered with lighting, sound men, camera tracks and cables. Strangers attended–my family was never invited. Three of my “husbands” died, one in a drama, two in comedies: one on our honeymoon, one at the altar just as he said, “I do.”

In my pretend life I loved them all, in that intense but temporary way we actors love. When the show ended, I couldn’t mourn long, as soon there was another story awaiting my belief. I rehearsed all the feelings of love and commitment in many forms for many years, but longed for real love.

One summer, a first time fake bride at 23, I played Sharon in the musical, Finian’s Rainbow. I strolled down the theater aisle with the man playing my father, longing for a ceremony with my own proud father giving me away. I hoped for a marriage that would last beyond the end of summer stock.

I was grateful my next marriage did not last– to a character, obsessed with the Three Stooges in a movie that included footage of them. My fake fiancé’s farce addiction extended to our reception, during which we were pelted with cream pies, flung by the real Larry, Curly and Moe in clips from an old film. The pies were caught by my face, wedding dress, hat, and bouquet on the receiving end in the new film. Of all my fake weddings, that one was the most messy.

In a case of “life leakage” and “location romance” (about which we actors must be vigilant), I longed to marry the actor who played George Seurat in Sondheim’s musical Sunday in the Park with George. My character, Seurat’s model, Dot, ended up in a fallback marriage. The pain of settling for less than my heart’s desire haunted me beyond the production. It probably kept me from making a mistake in a short, starter marriage. Sadly, most of my real relationships seemed as ephemeral, especially without benefit of a lush score played beneath.

Losing one husband to a brain tumor, with Kirk Douglas, as my father in law, sobbing by my side, sobered me as to how painful was the loss of a loved one.

On one series I was betrothed to a handsome plastic surgeon who performed an emergency nose job on me when I fell face first. He proposed to the results of his artistry on the spot. After he died during our ceremony, the writers wrote me a rebound wedding to another man…who died on our honeymoon.

Out of pity for me, the show’s designer slipped this still single, 40 year old one of the wedding gowns to keep. It was gorgeous, cut to fit me. “I’m going to wear this gown someday for real,” I swore to him, the dressm and myself. “Yes,” he patronized. “Of course you are.”

I kept it wrapped in plastic in my closet like Miss Haversham in Great Expectations for 25 years. I’d look at it every few years and renew my vows to it.

By my mid-40s, not having a real husband and kids weighed on me greatly. When my real father passed away, hopes of him giving me away died, too.

Then, when I’m 64, a real man, with whom I shared a real, long lasting love, proposed to me in a hotel bathtub. It wasn’t at all as I pictured a proposal would be. I was dressed in a shower cap and glasses. The lighting was fluorescent, the overhead heater so loud I had to shout “YES!” It wasn’t lit theatrically or orchestrated romantically, but it was gloriously, skin-pinchingly real.

I took the costume gown from the closet and pulled it from its plastic.

And when I had just qualified for Medicare, Stan Friedman, a nice Jewish psychologist, married me and I became a stepmother for the first time in any medium. We had a wedding, more beautiful than all the fake ones, with no make up or hair people to touch us up. Our real friends and family gave us a standing ovation as we came up the aisle, and danced with us all night long. How I loved getting married, but I don’t mind if I never do it again.

Unlike three of my fake husbands, handsome Stan thrives by my side. We have many romantic unfilmed moments every day. And, best of all, no one ever yells, “Cut!”

Many Weddings, Many Kids was last modified: June 27th, 2017 by Melanie Chartoff