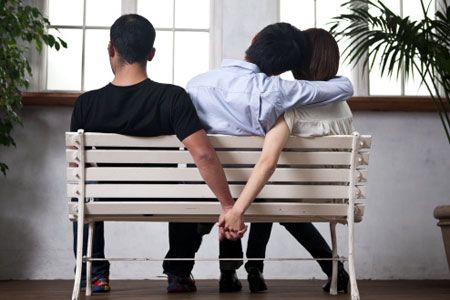 I don’t believe that the grass will be greener on the other side.

When I was 18, a friend of mine asked me if I thought you could love two people at once. Back then, so young and inexperienced, I replied with a very quick and adamant, “No.”

Almost 30 years later, I’m not so sure I would answer the same way. I’ve learned quite a few things since then. Yeah, stuff has gone down, stuff that I used to think would never happen to me, stuff I deemed irresponsible or weak, stuff that I now know is far more commonplace than I ever imagined.

Love, lust, instant animal attraction—whatever you want to call it—sometimes shows up at the most inopportune times. When it does come along however, you know it. The experience is undeniable. It’s like slowly sinking into a warm bath, or flying across the universe or having fireworks explode inside your belly.

You meet that special someone, and it’s déjà vu. You feel as if you’ve known that person forever. You just want to touch them, talk to them and be near them. You can’t get enough. It’s exactly how I felt when I met my husband.

But here’s the kicker—sometimes this sort of thing happens more than once in a lifetime.

How do I know? Easy. Because it happened to me.

Almost 15 years exactly from the day I said my wedding vows, out of nowhere, I experienced that love/lust thing all over again—only this time it was with a different man and I was still married.

Oddly enough, I was quite happy with my husband. Sure, we’d had our ups and downs by that point. We’d been together a long time and so it was to be expected. But you know that old saying: I was married, not dead. I was also human—a social, sexual being—and I was tempted, really tempted.

My connection to this other man was strong, immediate and blissfully over-powering. It was all I wanted, all I could think about. It made me high, but it put me in a tough spot. For the longest time after, the whole predicament gave me a complex.

I worried that there was something terribly wrong with me. I wasn’t fitting in with society’s norms.

Sure, I loved my husband, but I wanted desperately to be with this other man.

I worried that I had turned into one of those people who could never be satisfied, the kind of person who was always searching—addicted to love, possibly to sex. I saw myself as the star of some trashy television show. For a few years there, I lost a lot of sleep.

I contemplated cheating, but deep down, I knew I couldn’t. I am a terrible liar, and it would eat me up inside. I’d inevitably end up spilling my guts anyway.

There was the alternative of forgetting about this guy, and getting back to my old life, my life before I met him. But if you’ve ever been in love, you know how impossible that would be, especially since he was still around. I mean, he hadn’t left the country or anything. I knew where to find him.

So what did I do? I did what I do about everything else that causes me grief.

I told my husband.

He is my best friend, after all. We’ve always been honest with each other, but this was taking it to a whole new level. It’s one thing to say that you think Brad Pitt is cute and quite another to tell your partner that you want to have sex—like seriously have sex—with another man.

What would he say? How would he react? Would he ask me for a divorce? Luckily, he didn’t hate me after. And so it was: My idea of soul mates had changed dramatically. Can you say “two for one?”

Over the past few years, right alongside my own emotional/sexual awakening, I’ve noticed that there has been a definite trend in society to embrace one’s non-monogamous tendencies. The topic is all over mainstream media, and I’ve been watching, trying to figure stuff out.

Shows like Polyamory, Big Love and Sister Wives are just a few examples. Then you have movies like Sarah Polley’s Take This Waltz whose plot mimics my dilemma almost exactly.

Obviously, media reflects the thoughts of society at large. It must to a certain extent, as someone has to be thinking these things. Personally, I believe that people are tired of hiding their true feelings when it comes to this issue. They just want to be themselves. They want to be free. And I don’t mean free to go sleep with whomever they please; I mean free to think and say how they really feel.

According to Christopher Ryan, psychologist, teacher and the co-author of Sex at Dawn: The Prehistoric Origins of Modern Sexuality, “Few mainstream therapists would contemplate trying to persuade a gay man or woman to ‘grow up, get real, and stop being gay.’ But most insist that long-term sexual monogamy is ‘normal,’ while the curiosity and novelty-seeking inherent in human sexuality are signs of pathology.”

We can say whatever we’d like about what is “normal” or “not normal,” but the truth comes out in how we act.

Most—while we may pair-bond for a while—don’t necessarily pair-bond exclusively for our entire lives. We just don’t, and I think we need to face this fact head-on.

For me, this means accepting my thoughts and desires. What it doesn’t mean however, is that I think it’s okay to go out and sleep around without giving thought or concern for the other people in my life. I figure that if I act out of respect and love for my partner and my family, then I can’t go wrong. That’s how I try to approach every decision that I make, whether it’s romance and sex-related or not.

These days, I don’t try to pretend to be someone I’m not. I just try to be honest. Yes, sometimes jealousy can make things a little messy, but my husband and I have managed to work through it. I don’t rub my thoughts and feelings in his face. I just don’t lie.

The grass won’t be greener; it’ll be the same. It may look greener at first, but it wouldn’t take long before I started seeing some weeds. People really aren’t that different.

True, there are some exceptions, but it is my general opinion that relationships are what you make them. The grass is greener where you water it. And I water mine. But sometimes—just sometimes—I’d like to go for a hike in the country (wink, wink).

Through all of this soul-searching, I’ve come to the conclusion that there is absolutely nothing wrong with me. I’ve met so many other people who have experienced this same sort of dilemma that it would be impossible for these “errant” feelings of mine to make me a bad person. We’d all be bad people if that were the case, and that just wouldn’t make sense.

But what it really comes down to is action, right? How do I handle this situation? What do I do?

Well, that’s where I’m partially stumped. Yes, I try to act out of love and kindness for those closest to me, but that doesn’t make “man number two” go away.

Since I met him though, I’ve been busy. I have a life, and I have priorities— namely my children, my husband, my family and my own sense of well-being. All that stuff comes first.

I guess the short answer is that I haven’t done anything yet. Day-to-day, I barely have time to sit down for a cup of tea.

Maybe in a few years from now, when the kids are grown and on their own, things will be different. Maybe they won’t.

Whatever happens though, I will love my husband, and he’ll always be a main part of my life.

Unfortunately, there are no definitive answers, no black and white. If it feels right, at the right time, in the right setting—if all the lights are green—then maybe I’ll indulge my passions. If it doesn’t, or they aren’t, then I won’t. So far, it hasn’t.

Do I still think about man number two? Of course. Would I like to see him? Hell yes. Do I? No. A person can’t have everything they want. I’d like to go on a $10,000 shopping spree to New York City too, but that’s not going to happen any time soon either.

I have two, almost three children in university. Tuition is crazy expensive these days. Sometimes you just have to wait for stuff. And sometimes, you’ll never get what you want. But you can dream. And there ain’t nothin’ wrong with that.

Amanda Fox is creator of TheFurFiles—a blog in which she talks candidly about life, love, marriage, kids, cats and sex.  This article has previously appeared at http://www.elephantjournal.com