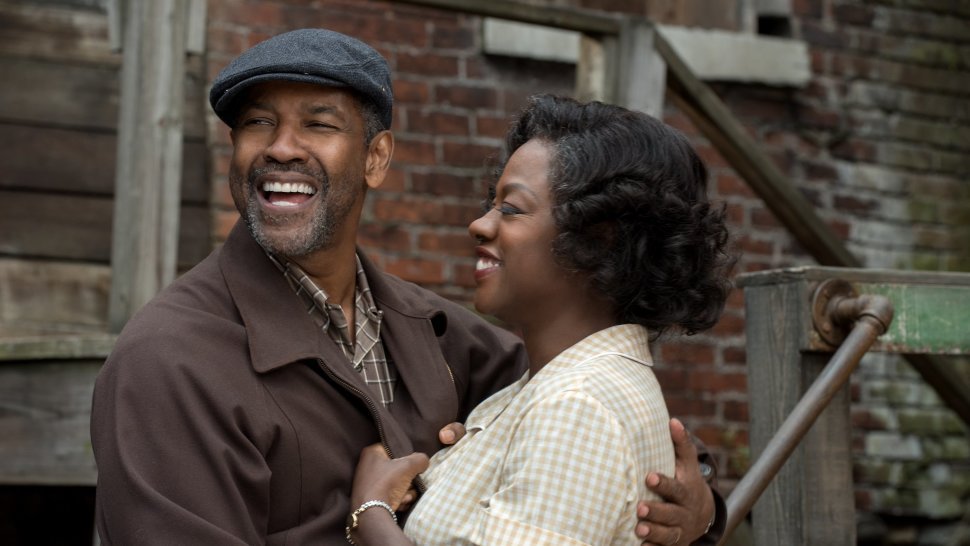 FENCES– the seminal Pulitzer Prize-winning work by August Wilson, one of a decade-by-decade 10-play cycle about the black experience in America–will rattle your bones. I’ve seen the great James Earl Jones do it onstage in a fearsome, monumental performance. Now I’ve seen two-time Oscar winner Denzel Washington do it on the big screen and my cage has been rattled and shattered again. This is a lucid, tender, and deeply humane incarnation on film which unlocks the play’s subtler rhythms and really gets under your skin.

Washington not only stars, but also directs himself and his co-star Viola Davis in performances that won them both Tony Awards for the play’s 2010 revival on Broadway. Here they re-calibrate these performances for the more intimate medium of film in a screenplay written by Wilson himself several years before he died. Washington is Troy Maxson a onetime promising baseball player who as a “negro” who struck out in the white world of professional sports, and is now moldering as a trash collector.

In the first scene we meet Troy and his best friend Bono (Tony-nominated Stephen Henderson who also starred in the Broadway revival) on the back of a garbage truck working the streets of Pittsburgh’s run-down Hill District in the 1950’s. Immediately the camera opens the play up and we begin to take an even closer look at these characters whose unglamorous circumstances might otherwise be easily “overlooked.”

Troy is headed home on payday to his wife the stalwart Rose (Viola Davis) of whom Bono says to Troy, “Rose will keep you straight.” Indeed. Viola Davis could keep a needle and thread straight in a hurricane, so forthright of character is her Rose; she’s luminous from the minute she walks out on the porch, throwing her light on her husband who’s off on yet another one of his rants about the racial injustice that has permanently colored his world.

Rose’s moral compass will be needed to keep Troy from coming unmoored as storms gather on the horizon. Troy’s ongoing battle with his teenage son Cory (Jovan Adepo) is coming to a head; the son’s dreams of football as a way to college tangle with his father’s bitterness and fear of his son’s failing; Cory accuses his father of jealousy, but mostly just wants to know his father loves him.

Also tugging at Troy is his older son from a previous relationship Lyons (Russell Hornsby); he’s a musician who seems shiftless to Troy. And finally there’s Troy’s brother Gabriel (Mykelti Willamson) brain-damaged from the war, who now wanders the streets, an innocent with a trumpet, and a haunting reminder of the toll life has taken, as well as the guilt Troy feels at having received compensation for the injury.

Washington directs this massive emotional load with great delicacy. There is little music, and when there is, it’s as though the sound is emanating from inside the characters themselves. There’s air in the film, and the camera finds the subtle beats in each scene.

We come upon Rose slowly from around a corner, her back to us bent over the kitchen stove, and we feel the heaviness of her life, as well as the portent of a revelation that will rock her world to its roots. In a scene near the end,when Rose cradling a baby says, “A motherless child’s got a hard time,” we see over her shoulder to her husband, and suddenly all the heartbreak of Troy’s sad, hard background comes to the fore.

That brings us back to Denzel Washington’s Troy. August Wilson’s brilliant, beautiful poetry, ripe with metaphor can barely contain the restless energy and lost dreams that keep Troy “eye-in the women”; but it’s all there in Washington’s loose-limbed gait and athletic build, his rambunctious energy and wily way with a phrase, the humor fueled by frustration, the frightening way his anger erupts when he suddenly smacks the pots and pans off the counter as he storms out of the room.

“If you can play, they oughta let you play,” Troy chants. And while he’s building a fence to keep the devil out, the film lets us quietly in, holding us fast in the poignant drama of a flawed, everyday man wrestling with disillusionment–then hits one clean out of the park.