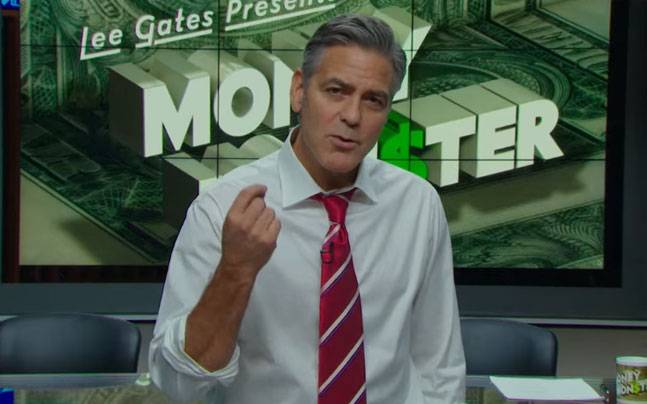 MONEY MONSTER the new film directed by Jodie Foster starring George Clooney and Julia Roberts–is as phony as a three dollar bill. It’s a cornball, ham-fisted, heapin’ helpin’ of preposterousity–and though that’s not a real word, it is nonetheless a perfect descriptor for this “not a real movie.” Within five minutes I was getting a whiff of the cheesiness, sniffing out the contrivances, the exaggeratedly cynical dialogue, the too heightened “buzz” in the studio of a TV station putting on a show. The too obviously slick TV show host played by Clooney (channeling his real life TV Anchor father?) is Lee Gates who hip hops his way on the air through the Dow as the carnival barker of a cable show about finance. We meet him swaggering through the studio, flipping his scripts, and ordering a reporter to try out an erectile enhancement cream minutes before airtime to find out if it’s investment-worthy.

I worked on the air in TV for 30 years and yes, it is a pretty ripe, supercharged environment; but by the time I left, it was impossible to brush up against someone in the cafeteria without being slapped with a sexual harassment suit. This TV frontman is hitting on floor directors half his age within seconds of air time just a stone’s throw from a camera lens, not to mention swearing around open mikes, and, we learn later, has been known, on the air, to compare the bell curves on an investment graph to a woman’s, um, physique. But I digress.

Enter a bomber–a disgruntled everyman, generically played by the nondescript Jack O’Connell. He walks in with a bunch of boxes–and NO ONE stops him. Would not happen. Not today at any TV station in any major market. This happens to be NYC. Kyle Budwell is his name and he’s an irate viewer who’s lost his shirt listening to this jackass of all stock trades and he has his finger on the button of a bomb. All he wants is an explanation. Really? He over explains, and uses words like “rhetorical” with a thick New Yawk accent; all of his dialogue is burdened with the movie’s message about the system being rigged against all the poor slobs out there like him and it’s gotta stop, and someone has to be accountable, etc. etc.

After forcing Clooney to strap on a bomb-laden vest while holding a gun to his head, Kyle demands and gets live coverage of every minute. The control room is helmed by unflappable producer Patty Fenn played by Julia Roberts who plays it like this is all in a day’s work. Without breaking stride or a sweat, Patty not only goes live, but also gets the bomber his own mike, good lighting, and special camera angles.

Meanwhile real life director Jodie Foster cuts to the reporter testing out the penis cream as he’s screwing a co-worker in a broom closet. Cut to policemen in spotless, costumey uniforms charging in as though sent up from central casting. “Breaking Bad”‘s Giancarlo Esposito as a police Captain is wasted in a part, most of which must have been left on the cutting room floor. Cut to shots of extras posing as regular folks in bars and offices around the city watching it all on TV, cutaways so staged we can almost see their SAG cards hanging out of their pockets.

I never bought any of it. Every character is a cliche. Clooney as a glossy, shallow TV type overplays; Julia as the savvy all work and no fun producer underplays. And Jack O’Connell as the mad bomber flounders between madman and schnook. When they put his pregnant girlfriend on the air, the film suddenly becomes the Maury Povich Show. The impromptu uninterrupted live shots in and out of tall buildings and elevators are simply impossible. Let alone high ranking officials from major international conglomerates giving sudden unscripted live interviews in the middle of an ongoing hostage crisis. And what police force would let a maniac with a hostage strapped to a bomb, walk down the crowded main streets of Manhattan’s financial district in broad daylight??

O’Connell is a far cry from the brilliant Al Pacino as the desperate bank robber in DOG DAY AFTERNOON who suddenly finds himself on live TV in a movie noteworthy for his mindblowingly overheated performance, and vise-like tension.  There isn’t a scintilla of suspense here. Never for a nanosecond did I believe that anything was at stake, not a person, not an idea. The film is also a universe away from the smart, crackling, wholly accurate and timelessly relevant BROADCAST NEWS which nailed the tricky interplay between style and substance still vying for supremacy on TV.

MONEY MONSTER is the work of well-intentioned but uninformed filmmakers who have missed the tone, and have demonstrated no working knowledge of how various institutions actually function–the police, TV stations, corporate hierarchies, let alone how individual human beings might really behave in these horrifying situations. Yes, attention spans are shorter and audiences hyped up on reality TV and video games are always looking for the next big drama–but these characters are zombies, dead imitations that leave us cold.

By the end of the film, Julia’s character is in the van and talking into Clooney’s ear, literally calling all the shots with no collaboration with law enforcement, while simultaneously engaging hackers around the globe to investigate and crack a behind the scenes case of financial chicanery–just in time to deliver the denouement on live TV, a la Nancy Drew!

So at the end of the day it’s the TV producer who’s the hero?? At one point a cameraman puts his camera down on the ground and turns it so it faces out on us, the audience. The shot holds for a few seconds…so…what??? It’s up to us?  And the media to stop being stupid and hold folks accountable? Right on. But it will take a much better film to make the point than this Money Monstrosity.