Is It Too Late To Improve Your Relationship With Your Dad?

Asked him to have lunch with me.

“Don’t you want your Mom to come?”

Up to that point, when I would call home…

“Hey Pris!” he would gaily exclaim. “How are you? Let me get your Mom…. Betty (he would call).” And I would hear him put the phone down. Trail off to go get my mother.

It’s not that he wasn’t interested. I am sure, after the call, he would ask my mother about what we had said.

We just didn’t talk. Me and him. I was 23 years old. I wanted to get to know my father. I longed for a more direct connection with him.

We had that lunch. And I told him just that.

It took us about 20 years to accomplish it. Slowly but surely, we developed our own relationship. Separate from my mom.

He told me something one time, “Your mother needed you more. So I stepped out of the way.”

Don’t get me wrong. He hadn’t stepped out of the way when I needed him. Really needed him. When I was being stupid, later in those same 20’s. When I was disappointing the heck out of him.

I will never forget. Dad was driving the U-Haul to help move my stuff out of the first house I had ever bought. But I was getting divorced. I was bouncing around in the front seat and had a new friend with me. Was chatting it up with him, acting as if I didn’t have a care in the world. I glanced over at Dad.

There was a single tear rolling down his cheek.

I had to look away.

That tear etched itself in my memory. Caused me more inner shame that I can tell you. It would take me years to apologize to my father. For the immature, self-centered girl that I had been. When I finally uttered those words, regretful tears slipping down my cheeks, he looked at me with a little surprise. And forgave me.

Why do I tell you all of this?

Because if my relationship with my father had not grown through the years. If he and I had not become closer. If I had never told him I wanted to get to know him better. If he had not shared a little more with me about himself. Then maybe I would never have told him I remembered what had happened in the U-Haul. Never asked for forgiveness. He would never have known that I had seen his disappointment in me. That I had seen him. 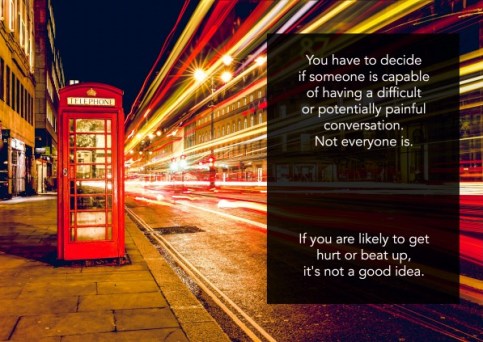 It was a good moment between us.

There were many others before he died in 2007.

Fathers can be so important. Both in childhood. And when you actually grow up. Which takes some of us a little longer than others.

It can take years for a relationship to blossom into becoming what it can be. #worththewait

It’s worth the work. It’s worth not settling for what it started out like.

I am very painfully aware that many reading this did not have Dads like mine. They had abusive, angry, controlling fathers. Or stepfathers. Or perhaps their fathers were not part of their lives. Literally they died, had medical or mental health issues or disappeared from their lives due to divorce or addictions.

They have much to mourn.

Maybe you are considering trying to have a better or deeper relationship with someone. Maybe having a conversation with them about something difficult or complicated. You have to decide if they are capable of having that discussion.

You may want them to be capable. But not everyone is. Are they actually able to handle it? Without becoming defensive. Or irrational. Angry or blaming.

If you are going to get hurt or beat up, it’s not a good idea to try.

I knew in my heart my father would accept my apology. Not go into a rant about how ridiculous I was “back in the day.”

For those of you who never knew that ultimate safety from a father, I grieve with you. I hope you find it. In some other relationship perhaps.

It was a gift I will never take for granted.

Please share this post if you enjoyed.  Subscribe to Dr. Margaret Rutherford’s site and you can receive Dr. Margaret’s free eBook,“Seven Commandments Of Good Therapy“, which is basic guide on how to choose a therapist or how to evaluate your current therapy.

You can send private comments to Dr. Margaret: askdrmargaret@drmargaretrutherford.com.

Is It Too Late To Improve Your Relationship With Your Dad? was last modified: June 17th, 2015 by Dr. Margaret Rutherford