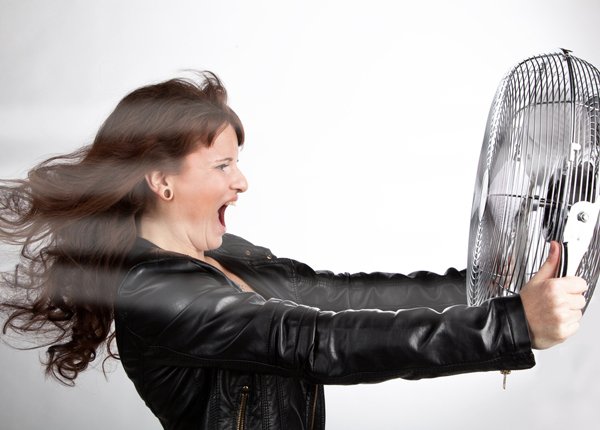 Is It Hot In Here Or Is It Just Me? 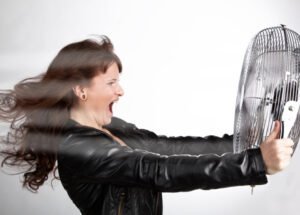 An old friend of my mother’s came to visit every summer when I was growing up.  Periodically throughout her stay, she would suddenly stop what she was doing and begin fanning herself furiously with whatever she could reach – napkins, magazines, newspapers, a plate containing the remnants of her breakfast.  While fanning, she would yell, “Oh God. I’m having a flush. I’m having a flush.”  “Stanley!” she would scream at her husband, “I’m having a flush.”  Mostly, Stanley ignored her.  Occasionally, he would shout back, “So, waddaya want me to do about it?”

As a teenager, I thought this was the funniest thing I had ever seen.  Maybe all of my mother’s friends had hot flashes, but nobody ever talked about it.  So, to me, this woman’s dramatic embrace of her hot flashes was hilarious.  Between visits, whenever she called to speak with my mother, my sisters and I would giggle and yell, “Is she having a flush?”

Many years later, I was chatting with another mother after we dropped our children off in their kindergarten classroom.  Standing in front of the school on a cold, clear winter day, she suddenly turned bright red.  Rivers of sweat poured down the sides of her face.  She pulled a soggy tissue from her pocket and tried to mop herself off while carrying on a conversation as if nothing out of the ordinary was happening.  Was she having a flush? It never occurred to me that people my age could have hot flashes.  Hot flashes were something that happened to old ladies with husbands named Stanley.

Standing in front of the school, facing my damp friend, I did not giggle.  That morning, I learned the most important lesson that anybody has ever learned in kindergarten.  I learned that hot flashes aren’t one bit funny.  Hot flashes are gross and sweaty and embarrassing and undignified.  Having learned this lesson, I vowed that I was never, ever, going to have a hot flash.  But there I was, face to face with my friend who was sweating profusely and clearly uncomfortable on that January morning when the mercury was hovering around 35 degrees.  Not knowing what to do or say, I blurted out, “It’s warm out here, isn’t it?”

One night last month, I dreamed I was drowning.  I woke up at 3:00 in the morning gasping for air and soaking wet.  We were in the middle of a late September heat wave and I should have turned on the air conditioner before going to bed.  I splashed some cold water on my face, cranked the AC, and crawled back under the covers.  Yesterday, while standing in front of a rack of yoga pants at TJ Maxx, I was suddenly drenched.  I had been rushing around and ducked into the store in between stops at the market and the pharmacy.  That, combined with the thrill of a good bargain (which everyone knows is enough to make even the most jaded shopper sweat), made my body temperature rise dramatically.  Also, it was clear that someone had suddenly turned the heat in the store up to 95 degrees.  This morning, sweat was trickling down my back when I got on the subway.  It was an unseasonably warm October day.  I looked around the car.  Why wasn’t anybody else sweating?  It was a hundred degrees in there.  I cursed the mayor who hadn’t done enough to keep the air conditioners working on the trains.  I cursed the auto industry for creating the emissions that caused the global warming that was making me so hot.  I cursed the weatherman who insisted that it was fifty degrees when it was clearly a hundred and fifty degrees.

At a party not long ago, I was discretely dabbing at my damp forehead.  A younger friend standing next to me giggled.  “You’re having a hot flash!”  “I am not having a hot flash,” I scowled at her.  “It’s a hundred degrees in here.” “Right,” she replied and smiled.  “Everybody knows that the who world is getting hotter.  Haven’t you heard about climate change?”  I hissed.  ”Right.  Sure.  If you insist.  It’s hot.  Really hot,” she told me, as she wrapped her sweater more closely around her shivering body and looked at me with pity in her eyes.

And now, I’m starting to wonder.  Is it hot in here or is it just me?

Is It Hot In Here Or Is It Just Me? was last modified: November 8th, 2017 by Betsy Kramer