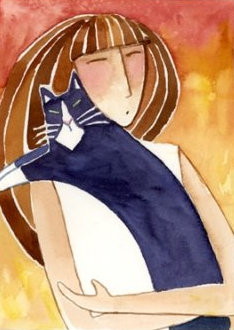 He is a shadow of his youthful self — gone is the stocky, sturdy swagger, replaced now with loose skin, a few less teeth, and an overall fragility. And he is my faithful feline companion.

He turned 18 on August. Over a 100 in human years. We adopted him at the Agoura Hills Pumpkin Festival in California in October 1993. Orphaned when his mom was hit by a car, rescued by the local animal shelter. Thirty-five bucks. Such a deal. Eighteen years of faithful (the feline version thereof) companionship, purrs and cuddles.

He was my oldest daughter’s first pet, adopted when she was three. He joined the older cats already part of our household, who looked on in resigned disdain. Soon enough he had taken over the house with his charisma and outsized personality. And yet, he always seemed to know whose cat he was. If we couldn’t find him, chances were he was tucked up in her bed. Or under it, if it was time for a car ride (how do they know this?). I would have the darndest time getting him  into his carrier for those vet trips and yet my daughter could put  him in one of her American Girl doll dresses without so much as a scratch. For a few ridiculously funny minutes, anyway.

He slept on her bed nearly every night. When she was sick and home from school, and had priority over the comfy couch in the den, he would perch overhead on the back, keeping watch. If I needed to wake her up for a medicine dose, he’d stare me down as I approached. As if to say, you know you need to clear that through me first.

He loved to find other creative places to curl up and sleep — amidst the pile of my daughter’s stuffed animals, as if he thought he could blend in. Under the Christmas tree — a tighter squeeze as the big day approached and yet he always managed to wedge himself in. As the girls grew up, we added another cat to our brood, a lovely female calico. To this day he generally just tolerates her. Several years ago, we all moved across the country from Los Angeles to the New York City suburbs. And he got the chance to put his paws into some snow, and discovered the coziness of nestling in the Queen Anne chair next to the fireplace.

The girls grew up. And inevitably, he began to age.

And then our firstborn went off to college — a tearful goodbye that he probably didn’t understand. I would still find him in her room for a few weeks after she left, on her bed, in a pile of clothes left behind. Oh, my daughter and her piles. Or next to those stuffed animals, still there, though purged and culled through the years.

And so he switched over to me. He’s mine now and that’s all there is to it. And now that I have left my full-time NYC commuting job for a part-time practice here in my home office, he is my shadow. My beloved magnet. I don’t know whether I need him more in this transformative phase of my life, or whether it is he who clings to me, but whatever it is, we’re in it together. When I am working, he is usually behind me on the couch, wrapped up in an afghan I knitted a few years ago. Sometimes I have the TV on, or music, but sometimes all I hear is his snoring, his purring, or the cute meows he makes when he wakes up and doesn’t quite remember where he is or how he got there. He sleeps next to me at night. My husband works mostly overseas so most of the time this isn’t a problem. When he’s home, it takes a bit of maneuvering. Thankfully, my husband considers him the world’s ultimate cat.

Yes, we are warped. But how we are rewarded. Is there a better feeling than cuddling up with a purring creature, who rubs their head against you, curls up next you and loves you unabashedly, flaws and all? I’m not sure there is.

And I’ll take it. I’ll take all I can get of it for as long as he’s happy to give it to me. As long as he’s happy, eating and pain-free — he’s mine. And so, I’ll gloss over the occasional barf sessions in  the middle of the night, the puddles of pee on the floor when his aim overshoots the top of the litter box (I am currently on version  six thereof: the “mega ultimate box”). I’ll take it all, as long as his life is good. He’s my bud. My magnet. Where I am, so is he.