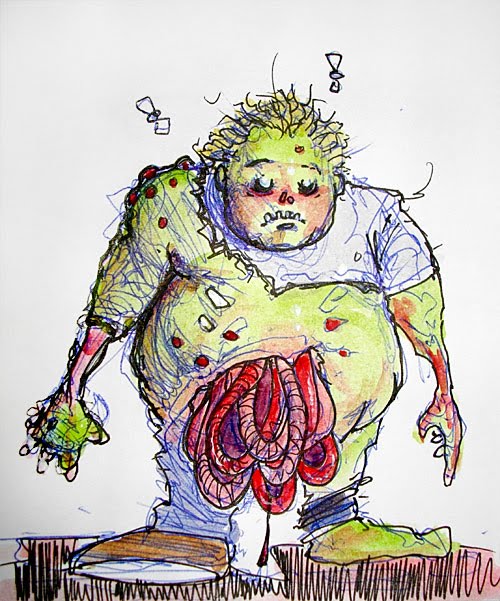 I’m in a holiday shopping “Gumption Trap,” and I just may have to cut my leg off to get out.

The term “Gumption Trap,” as many procrastinators out there know, originated in Robert Pirsig’s Zen and the Art of Motorcycle Maintenance. It refers to a mindset that causes one to lose enthusiasm, zaps initiative, and prevents one from accomplishing what needs to be accomplished.   You know the drill: it’s why the stack of papers that you were asked to review six months ago remains at the bottom of your inbox.  It’s why you never started Wuthering Heights in high school and read the Cliff Notes the night before the test.  It’s the mindset that prevents you from ever starting that wonderful business idea.

And it’s why I am not able to take my ass to the mall when I really want to buy the right gifts for the right people this holiday season.

I admit that I am a little shopping impaired on the best of days.  As a little girl, when my mom took me shopping, I always seemed to develop a headache with nausea and actually sometimes even a fever- and had to be escorted home, where I made a miraculous recovery (N.B. this strategy also worked well for getting out of setting the table.)

As an adult, I am not what you would call a champion shopper.  I am the friend that paid full price for the sweater at Lord and Taylor when you bought it for half price at Marshalls.  I don’t know “whose” shoes I am wearing, and I never buy three dresses with the intention of returning two of them (though I have been known to buy three dresses and give two away years later with the tags still intact.)

This year, life zapped whatever little initiative I had for holiday shopping.  News of the fiscal cliff, rockets blaring in the Middle East, pictures of devasting hurricane damage – they just don’t make for a good shopping mindset.

And it didn’t help when my daughter mistakenly took the only set of keys I have to my car with her on the bus back to New York City.  For some reason, I momentarily lost sight of what she might like for Hanukkah.

It didn’t help when I drained the battery in my son’s car, or when I broke the GPS and got lost in my hometown, or when I lost my purse for a half day–and later found it sitting on the bureau in my bedroom.

I ignored Small Business Saturday.  Black Friday came and went while I sat on the couch and ate popcorn and watched movies.   Cyber Monday passed me by at the speed of light, even as I deleted hundreds of emails from the very same retailers I was sure I had unsubscribed to this past summer.  Which raises the question:  “Can you really ever unsubscribe?”

A few days ago, I started saving the catalogues that clogged our snail mailbox, thinking that I might actually get some good ideas, go retro and do the mail-order thing.  I made a pile on the kitchen table of  the catalogues we received, and soon they were as thick as my old law school textbooks (but so much prettier).   As the pile grew, I became increasingly annoyed by the waste.  It was spectacular.

“Look at this!”  I complained to my husband, listing off the names of catalogues that had arrived in our mailbox:  “Lands’ End, Wine Enthusiast, Hammacher Schlemmer, Orvis, L.L.Bean, Brookstone, Pottery Barn, Frontgate, J.Crew, Johnston and Murphy, Grandin Road (whatever the hell that is) and three catalogues – just from Bloomingdale’s.  I’ll never even look at these!”

“In that case, I would really love it if you would get rid of that pile,” Mike responded.  “Just stick all those catalogues in recycling- except the Wine Enthusiast – you seem like you might need that.”

I need more than wine. I need focus. I need to make a list, and follow through. I need to ignore the fact that I could have bought “it” cheaper last week and that “it” will surely be cheaper again right after I buy it.  I need to meet a friend for lunch at the mall and steal all her good ideas for the Yankee Swap.  I need to taste a little free tea at the mall.  I need to have good parking karma, and I really need to keep track of my purse and my keys.

Escape from this holiday gumption trap must be imminent because time is not on my side.  Unless of course, 12/21/12 is really the end of the world.    There is a really big part of me that is tempted to wait and see.