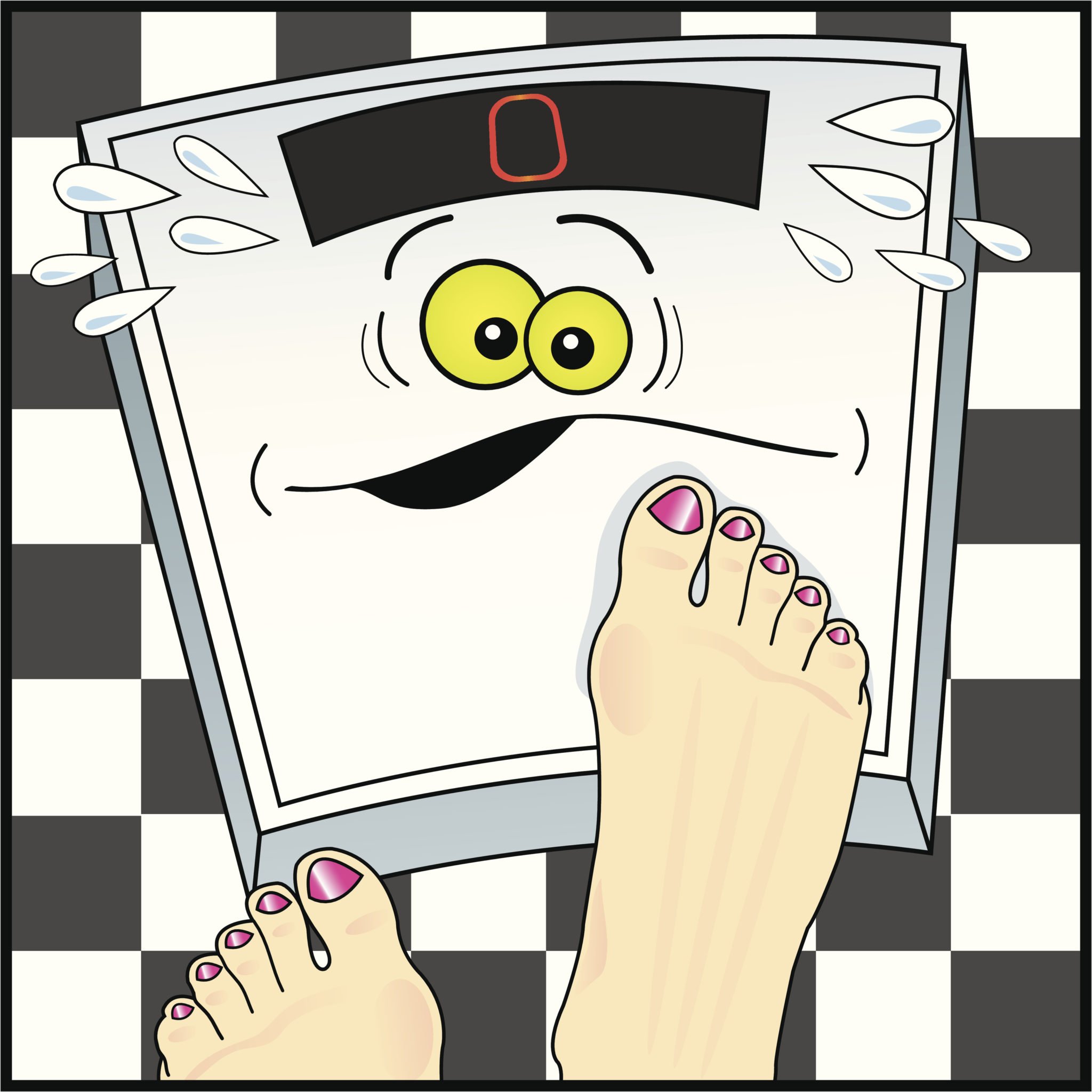 I’m Crazy Addicted To My Scale

I have a confession to make. No, it’s not my unwavering love of all things red and winey. And it’s not my 20-year, auto-renewed subscription to Star magazine. Or even that when I get stressed, Lucky Charms is my go-to comfort food. For all three meals. So here it is: I am a weigh-in addict. I cannot start my day until I weigh myself. Seriously. Can’t even start the coffee. Skipped weigh-ins cause temporary confusion about how I feel about myself, because I don’t know if I’m fat. I know, “fat” is subjective. One woman’s “chubby” is another woman’s dream weight. But before you decide that I’m the shallowest woman ever, my informal surveys of women I know indicate that I am not alone. Bless you, ladies.

It seems that many of us have a weight that we’ve deemed to be our personal, and extremely private, “fat weight.” The one we admit to no one, including our best friends. It’s powerful enough to make or break our self-esteem. Under that number, and we’re still kind of hot. Over that number, and shit just got real. Instant panic ensues, resulting in a wide variety of creative, emotional, and sometimes hilarious responses.

I immediately start ransacking all my kitchen cabinets and fridge contents, tossing out every carbohydrate I spot (briefly considering doing the same with the wine, but I’m depressed, not insane). The wine stays, but I stock the kitchen with kale and vow to stop using my treadmill as a lingerie drying rack, and fire it up on the spot, determined to actually get on the stupid thing to lose this freakin’ weight. Preferably today. My usual breakfast of bacon, eggs, and a frosted cinnamon roll now becomes a toss-up between the self-congratulatory egg whites and turkey bacon, or what-the-hell-who-cares-I’m-a-big-fat-loser-anyway-gimme-the-damn-roll. It could go either way.

Sometime during puberty, the scale and I settled into what would become a lifelong battle of wills. Specifically, how do I persist in eating every crappy, non-nutritional, processed food product I love and keep those numbers where they belong? Every morning at 5 a.m., the scale and I get the gloves on and see who won the previous 24-hour round. Had pizza for dinner and didn’t gain an ounce? Take that,  you piece of junk. Cut out all my carbs and gained 1/2 pound?? Excuse me while I throw your scrap metal ass out the window, and you can spend the rest of the day in the begonias. Morning score: Scale, one; me, zip.

Over the years, my scale has attained mythic proportions, determining my self-esteem for each day on an impenetrable level that no amount of compliments or reassurance from Hubs, friends, or strangers on the street can impact. If I weigh less than The Number, I look pretty good. If I weigh more than The Number, I’m a hopeless porkchop, never to be attractive again. I weigh myself every single morning, no matter what. Going on vacation? I simply take my scale with me. Attending a conference? Slide it into my carry-on. My scale has become a traveling gnome. After four decades, it’s seen three countries, flown from the West Coast to the East Coast (and back again), cruised to Alaska, and lazed on the lanai in Maui.

“Why do you do this to yourself?” Hubs repeatedly asks. “I have to,” I tell him, “If I don’t weigh  myself, how will I know if I’m fat?” “Just go by how your clothes fit,” he says, with slightly condescending male logic. “That only works for date clothes,” I explain, rolling my eyes, “Yoga pants are stretchy. That’s why we love them. But you wouldn’t feel anything under five pounds. I’m 5’2”. Five pounds would puff me up like a Ballpark frank on the grill. And since menopause pretty much obliterated my metabolism, I can’t lose weight on more than 200 calories a day, so I’d stay that way forever.” He eventually admitted defeat, mumbling “Next time, I’m marrying the first woman I meet who doesn’t own a damn scale.”

Not surprisingly, with 16, 425 weigh-ins behind me at last count, I’ve uncovered a few tricks to help salvage what might otherwise be a bad day. Weigh-in novices, take note:

I know what many of you are thinking. “What is wrong with this woman?? I could never be that vain or that superficial. Get her some help. Now.” You’re right. I should probably seek professional help. But it’s truly not about vanity or self-absorption. I don’t think the world revolves my weight or that anyone else gives a rat’s behind. But I do.

Hubs recently brought me an article that offered a potential solution to my fixation. It suggests starting with an every-other-day weigh-in, tapering off by one per week, with the ultimate goal being no more than once a week. Behavioral modification for scale junkies. Who would’ve thought? And after one month, I think I get a pin.