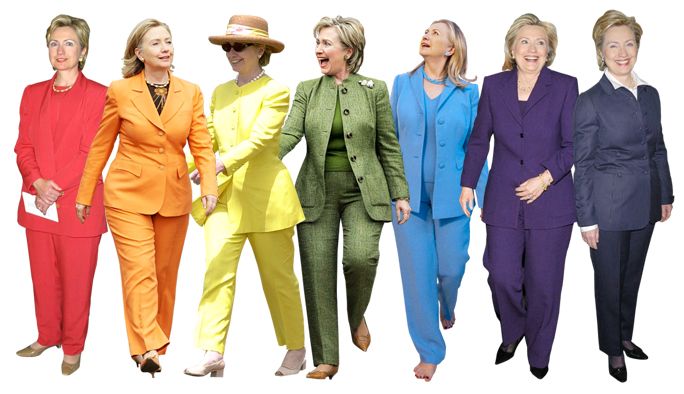 I Vote For Hillary to Bring Her Bright Clothing Back

And I’m not talking about the fact that like Obama, Bernie has come out of nowhere to threaten her run for president and trip her with his sensible leftish shoe.

As the first woman to have a legitimate and deserved chance at the White House, she has been more bisected and dissected than a high school biology lab frog. Or any man running for office. Ever.

I won’t go into the politics and sexism behind the microscope used on Hillary here, as numerous journalists and media outlets do a brilliant job of that already.

But I will weigh in as someone equally obsessed with fashion as I am with politics.

For most of her career spanning FLOTUS, Senator and Secretary of State, Hillary was chronically criticized for her colorful and shapeless array of pant suits, often adorned with giant pearls or big chunks of jewelry. It became the fodder for many an SNL skit and everyone else with a mouth, keyboard or pen. But you know what? She stood out, it was her look, and she unapologetically owned it.

But now that she’s on the national stage during this most fascinating of election cycles ever, the New York Times’Chief Fashion Critic Vanessa Friedman astutely writes here that for the first time in her public life, the conversation about her clothes has ended.

Direct from her NYT piece:

…how did she escape the issue of clothes? By taking a page from her opponents’ playbook and making it her own. By boring everyone into silence.”

Gone are the sunny Skittles-bright suits and Carmen Miranda baubles, washed away by dark and cloudy blue and grey get-ups that shade her sartorial spirit.

….I can’t help being a little sorry about it. Because in sapping her clothes of potentially controversial content, Mrs. Clinton has also sapped them of personality.

Since I’m clearly not a journalist, fashion critic or Times-caliber writer, yet am clearly too lazy to paraphrase, here is a big chunk of Vanessa Friedman’s piece:

She seemed to see fashion and our obsession with what our role models wear as opportunity and tool, or at least to have come round to that view, after carping early on about unfair gender-related focus.

That to me was the biggest advance: not complaining about fashion, not denying it, not ignoring it, but milking it for what it was worth. For what it could do for you: support your message. Underscore it. Add to it.

People are interested in clothes. So what? They want to talk about them? Fine, let’s talk. If that’s the way to grab attention and engage — if that’s an entry point to a broader conversation and deeper connection — it’s at least as valid as discussions about, say, what sub sandwich is your favorite.

And that is a lesson worth learning, one I would pass on to my daughters. It is one I wish female politicians — and I hope there will be more and more of them — would learn (male, too, for that matter). But it’s no longer being taught.

There are miles and months to go before the Democratic convention, even more until the general election. Things could change. Winning could give Mrs. Clinton the confidence to play a little — or, conversely, convince her that bland is the way to go. (Losing comes with its own set of lessons.)

Either way, she makes history. And she has the opportunity to change it. To really solve the clothing problem by showing that it’s not a problem.

It’s a platform, by another name.

So ladies, I vote for all of us to work and or rock whatever we want, however we want, whenever we want, always.
I know that when I do, when I truly let my personality fly no matter what, it becomes my own personal power suit. And I feel like a winner.
xo
I Vote For Hillary to Bring Her Bright Clothing Back was last modified: February 22nd, 2016 by Blankstareblink