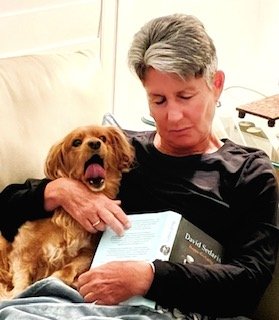 I Sleep Around. And I’m Shameless

This past year I started again. I hadn’t slept around in years but now I do It regularly. I relish the delicious illicitness, that feeling of surrendering to a higher power. The desire is overwhelming at times. When I succumb, I savor the sense that I’m slipping out of myself, completely letting go. I crave the cool Egyptian cotton or silken Italian leather beneath my bare skin before giving myself over.

I confess. I’m a slave to the nap.

I’d like to blame the pandemic. The fear of catching a potentially fatal illness. Or losing someone else to it. Maybe it’s age. I’m 65. I’ve lived a lot. Run too many miles, hit too many tennis balls, worked too many all-nighters. But I think it’s more a capitulation, an acknowledgement that it’s okay to be tired. Napping has become my friend.

By 3:30 most afternoons I’m dozing off in the kitchen, trying not to fall off my chair. Now that I’m retired, I’m free to tiptoe to the bedroom or den, pulling up the faux fur throw and snuggling in with Zadie, my 20-pound golden spaniel mix. An eager accomplice, she enjoys napping almost as much as barking at any indistinguishable sound outside.

I’m sure my husband discovers us and shakes his head, astounded his normally wired wife and mutt can fall out so readily. I’m not lazy, I’d insist. If I were awake. Each week, I walk at least 15 miles and play vigorous tennis three to four times. I routinely run up and down three flights of stairs in our townhouse. Shop, cook, write, take classes. I’m busy, I’d explain. Unless I’m napping.

For decades, I was nap-averse. I embraced Ben Franklin’s words: “There will be enough sleeping in the grave.” Before cell phone calendars, my day planner was bursting with events, assignments, social engagements. I lived my life by fifteen-minute increments. I’d boast about my overscheduled existence, taking pride in my preternatural endurance. Naps? They were for sissies.

But in the past year or two, I’d whine about feeling weary. “Why don’t you just go take a nap?” my husband would suggest, ever sensible. I used to give him “the look.” You know, the one filled with disdain, as though he’d proposed I commandeer a spacecraft and conquer new galaxies.

We moved to Washington, DC, late in 2020, a stressful decision at the height of the pandemic. Unpacking and organizing a new home is tedious. I was tired. Maybe I should try napping, I thought. Awash with guilt, I’d lie down and let sleep envelop me. A half hour later, I’d awaken, refreshed and ready to tackle the rest of the day. Napping proved to be an antidote to the tortured overnight wakefulness that accompanied menopause. And yet there was the shame.

Why is it that Americans so often associate the nap with laziness? In many cultures around the world napping is a common, even everyday, practice. The word siesta comes from the Latin “sexta,” which indicates the sixth hour of the day (starting at dawn, so around noon) when the sun is at its apex and it’s routine to rest and avoid the scorching afternoon hours. In addition to Mediterranean countries and Latin America, napping is the order of the day in Southeast Asia, mainland China, Africa, and the Middle East. In Japan, white-collar workers often take power naps at the office or in public spaces. Known as inemuri or “sleep when present,” daytime rest is interpreted as a sign of diligence and hard work.

I gradually came around to the joys of napping, joining an informal club consisting of Albert Einstein, Winston Churchill, Margaret Thatcher, Eleanor Roosevelt, and Salvador Dali. Our fortieth president, Ronald Reagan, was an inveterate napper. Upon leaving office, he joked that his chair should be inscribed, “Ronald Reagan slept here.”

It’s no surprise I felt healthier once I started napping. Researchers have found that siestas provide a plethora of mental and physical benefits. We’re better able to tolerate frustration and feel less impulsive. We’re more relaxed, more alert, in a better mood, and enjoy improved memory and performance. Naps seem to benefit the immune system too. People who partake regularly are 48 percent less likely to suffer a heart attack, stroke, or heart failure. But don’t overdo it, experts caution. Twenty minutes once or twice a week is all most people need to reap the benefits. And it’s best done in the early to mid-afternoon so as not to disturb nighttime sleeping.

My enthusiasm for a mid-day state of unconsciousness isn’t extraordinary. In the animal kingdom, male lions are perhaps the biggest fans. They sleep off and on for an astonishing 20 hours a day. Of course, they also have sex an average of 20 to 40 times daily and as many as 100 times in a 24-hour period. No wonder they’re tired!

According to a recent survey, one-third of adults in the U.S. nap on a typical day. Older adults nod off more frequently and men outnumber women by 13 percent. Who’s running the country while so many of us are conked out?

Even businesses are slowly coming around to the concept. Companies such as Nike, Facebook, Google, Ben & Jerry’s, Zappos, and Uber not only allow but encourage napping. They’ve created special rooms or invested in high-tech “sleep pods” – futuristic, cylindrical capsules with individual sound systems installed in spaces with soft lighting and soothing hues. Clearly, I retired too soon.

Now that I’m out of the closet, I’ve found that daytime snoozing is the perfect way to postpone tasks I dread. I call it “procrastinapping,” the decision to curl up with Zadie in lieu of sorting socks, emptying the dishwasher, tidying my office, or tackling a writing project. At 65, I nap because I can. Because I love it. Because my dog loves it. Because I don’t owe anyone anything. I have no deadlines to make. No one to compel me to do anything. I’ve learned there’s no such thing as a bad nap because even a five-minute timeout is better than none. Short or long, in a chair or on a couch, after sex or before dinner, it never disappoints.

The world has become a disturbing place with insidious new viruses, societal conflicts, and environmental threats. I read for hours each day to stay informed. But when I curl up in just the right spot, the sun streaming through the French doors, Zadie cocooned in the bend of my knees, I can melt into a nearly instantaneous nap. You might call it lazy. I call it bliss.

I Sleep Around. And I’m Shameless was last modified: July 17th, 2022 by Karla Araujo