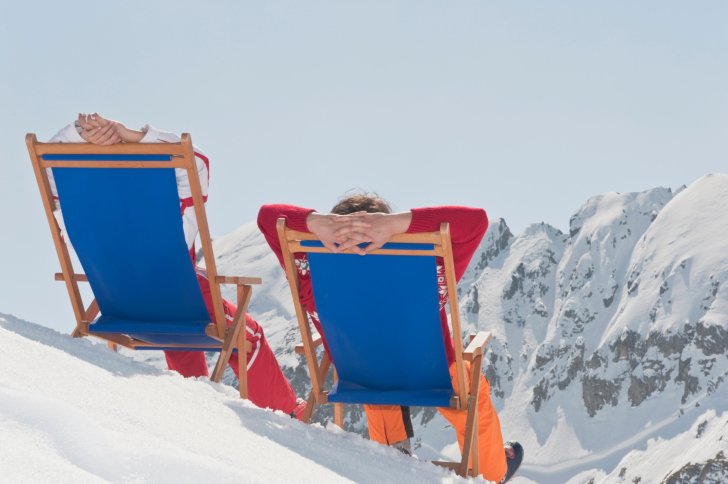 I know skiing at 10,000 feet is brutal on my skin – but the rush of snow under my skis and the fresh air filling my lungs as I race down the slopes is so exhilarating – it’s a trade-off that I’m willing to make.

I know the sun reflecting off the snow is driving the creases deeper into my brow, the wind is carving patterns around my lips, but the thrill is so addictive that I throw vanity to the wind and float down the mountain.

There were no warning signs when I started skiing that said, “Beware, high altitude skiing accelerates aging of your skin.” The only signs I saw were, “This run is for experts only,” and that was my invitation to go for it.

I have been on skis since my dad laced up my ski boots at 3 years-old and the sport is as natural to me as walking. My skiing took me to U.C. Boulder for two years where I spent every last penny I had on ski tickets. I believe the only sunblock I used back then was the greasiest one I could find — Hawaiian Tropic– to elevate a buttery brown tan.

My junior year abroad brought me into the mountains of France – Courchevel to be exact. My French boyfriend Laurent led me deep into the snowy covered Alps with an après-ski that only the French know how to pull off — it was the perfect cocktail of seduction. I barely thought about applying any Piz Buin sun block back then – I was 19, tan, and carefree.

A flirt on skis evolved into a marriage to the man who took me down narrow couloirs and into knee-deep powder. Skiing cemented the marriage.

When I sold my publishing company, the first thing we did was buy a ski house in Vermont where we raised our two boys on skis and snowboards. Frost bitten and wind burned, the winters in Vermont took it’s toll on my 40-something skin and I finally became diligent, applying Oil of Olay night cream to curb the creases that were setting in.

Over the last eight years, my second husband Bill has earnestly taken to the slopes with determination. Last week his skiing had improved so much he joined us on the tougher slopes, tackling them with ease. Watching him navigate the moguls made my heart pound with anxiety, worried that he had taken on too much and, burst with love, that he had taken it on at all. Each morning I apply #50 Dermalogica to my 50-something weathered wrinkles, knowing that it is hopeless to stem the tide of this aging face.

I remind myself that the romance of fresh air, family, endorphins and body parts that (so far) haven’t gotten in the way of our love of skiing, are gifts that keeps on giving.

Except for this one caveat– skin damage! Battered, older, thinner and damaged skin that is no longer as elastic, resilient or fresh looking is my payback for too much fun.

Riding up the gondola this past weekend there was a couple who must have been in their late seventies. Wrinkled and ruddy from years of wind and sun and snow in altitudes of 10,000 feet was just the icing on their faces. You couldn’t help but feel their love as they adjusted each other’s helmets before getting off the lift. They had been skiing in Vail since 1977 and they waved goodbye to us like two kids, the husband saying, “take risks and ski strong.”

My husband and I waved goodbye and smiled at each other, glad they were not only older than us – but still “doing it.”

But I’m not blind to the abuse my face has taken. Like all good things – my euphoria ends when I hit the ladies room. I try not to spend too much time at the mirror but I do – because I can’t help but check in with my face. Inevitably my eye-liner from the night before has found it’s way into the circles under my eyes. My face is spotted like a giraffe. The smooth brown tan of youth no longer exists– I’m now a patchwork of colors – ruddy and marked. No amount of sunblock has been able to beat back the years on these slopes.

I sigh and head back out to my ski buddies and within moments – I’m on the slopes forgetting that face in the mirror. As I slide over the moguls taking one sweet bump at a time – I am the Colorado collegiate, the girl from France, the lover and the athlete. I feel happy and light, like a playful kid, and I know that the trade-off is worth it.

I Knew This Would Age My Skin But I Did It Anyway was last modified: March 1st, 2016 by Felice Shapiro