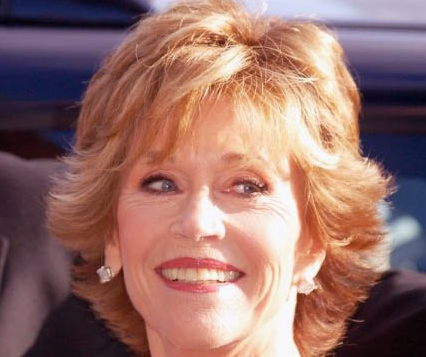 I Have a Crush on Jane Fonda

It started with the movie “Coming Home.” Jane’s acting (or was it her acting?) even got my first husband, Alan, agreeing with me that she was something special. Needless to say, he went gaga over her in “Barbarella.” True, she was a bombshell (still is, as a matter of fact!), as well as a great actress, but it was when she moved beyond the screen and began using her fame as a platform for politics that her true celebrity shined through.  True, I was just a young teenager, but the way Jane Fonda spoke about the Vietnam War was powerful, exhilarating and risky. And I admired that.

The years went by and Jane continued to grow in ways that aligned with where my head was at. She showed up on the exercise mat when I was just crawling onto it for the first time in my 20’s. Butt squeezes and Feeling the Burn were Jane Fonda moves that inspired generations of women. She wasn’t afraid to wear a leotard up to there. Nor was she afraid to remind women that their tight bodies wouldn’t last forever.  Her motto was to work it till it really hurt.  The pain is real. But the pain will get you to where you need to be.  A hard reality that I appreciated.

I even loved her complicated family relationships. I knew her mother had died early, her interactions with her siblings were strained, and that she had a tumultuous relationship with her father, Henry. But watching the two of them together in “On Golden Pond” was priceless. I wanted him to jump through the screen and hug them and let them know their reconciliation in so public a venue was commendable.  “I believe in you,” I wanted to shout from my movie theater seat. “You go girl!”

Jane married Ted and I kinda lost track of her.  I’m not sure what she was up to –during that period she had a bit of an “arm candy” appeal but, but I was too busy raising my family to really notice. After all, once a feminist, always a feminist and I knew she’d rally, which she did when she divorced Ted years later.

She emerged again for me – and I believe for BA50’s in a big way – most recently. I went to the tedxwomen event in New York this past December and when she took the stage my adrenaline started pumping. Seventy-four-years old – did they say 74? – it’s wild. Despite all she’s been through – three divorces, the suicide of her mother, the unrealistic demands of Hollywood, and so on– she looked terrific. In fact better than terrific. I don’t care if she had work done, she has proven to me (and other BA50s) that real beauty comes from the lines on our faces, the wisdom we have accrued, the journeys we have taken, and the paths we have forged. I think her authenticity and strength is what makes her look like a crystal of grounded energy with a field that radiates and inspires and makes you want to listen.

I particularly admire how she describes her life as a series of three acts (each 30 years long) and says this third act will be her most significant,  Why don’t we all think this way? We have so much to teach, so much to impart, so much still to do. Age is not an excuse to slow down, but instead a mandate to move forward.

If you haven’t seen her video from Tedex here it is ((http://blog.ted.com/2012/01/04/lifes-third-act-jane-fonda-on-ted-com/)). I don’t think it’s possible to watch without feeling like you’ve learned something important.

Her third act continues with grace. When she took the stage at the Golden Globes this past month I gasped. That dress, that timeless look, that body….

…toned, elegant, athletic and ageless…. is it any wonder I’m in love?

I Have a Crush on Jane Fonda was last modified: October 1st, 2012 by Felice Shapiro