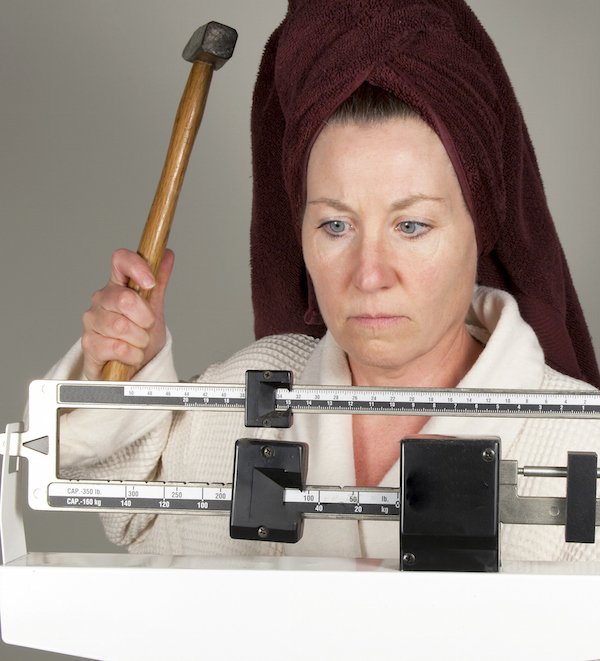 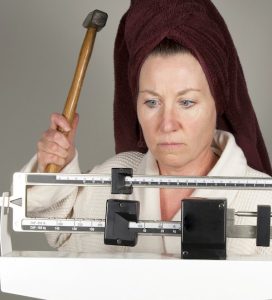 The only thing the amazing Oprah Winfrey and I have in common is the ongoing quest to fit into a “normal” clothing size.

To forever turn our backs on Lane Bryant and fit into a Chico’s size two (well, maybe shopping at Chico’s isn’t exactly a goal for Oprah). To eat our cake without wearing it later on our thighs. To…

Well, maybe we have a few other things in common. We both like books. We’ve both lived in Santa Barbara, albeit at different elevations (literally). We both look good in red. We’re both entrepreneurs, even if she has been a wee bit more successful and made a little more money at it than I have. I’m running out of similarities here, folks.

But damn it, Oprah! Weight Watchers? You couldn’t leave it at joining up, counting points, and seeing how that worked out for you? Oh, no. No. You had to go buy a big honking chunk of the company. And now you want to know if I’m ready to come join you. See? She knows my name and everything.

Well, I’m not biting, Oprah. Fuck, no. And who told you I was fat and needed a weight loss program, anyway? I’ve bought the books you recommended and I even subscribed to your magazine for a time, but don’t you dare show up in my mailbox inviting me to go on another damned diet with you. Hell to the no.

Here’s the thing: I was happy for you when you strutted on set in your skinny jeans pulling a wagon load of fat. “You go, girl!” I said. I’ve commiserated with your ups and downs on the scale. I’m with you, O. I can relate.

I’ve seen pictures of you running without makeup, all sweaty and still a little chubby in the trainer Bob Green days. (And hasn’t he made a pretty penny on helping you lose weight that one time? I’ve got his first book as evidence. Yeah, he helped me for a couple weeks, too.) I’ve actually been WORKING all these years that you were on television so I rarely had time to watch your show, but I was as impressed by your accomplishments and good intentions as the next guy.

But I draw the line with you buying Weight Watchers, Oprah. I don’t know why, but that really pisses me off.

So we’ve got the adorable Valerie Bertinelli and crazy Kirstie Alley for Jenny Craig (although I don’t think either of them BOUGHT Jenny Craig, for Pete’s sake). There’s all that Biggest Loser stuff. A new gym opening up near me is having one of the winner/losers at their grand opening. Like I care. Put me in a controlled situation at some California ranch with someone doling out my food and making me exercise all day and I guess I’ll lose some serious pounds, too. Not to say they don’t work hard and suffer for it. I get that. But still. Did you ever wonder if Biggest Loser pays their mortgages and other bills while they’re on the show for weeks at a time?

And now we’ve got Oprah wanting me to deposit more money into her quatrillion dollar bank account by joining her at Weight Watchers. Like we’re going to exchange recipes and diet tips while we wait in line to get weighed at a meeting. Bite me, Oprah. You’ve got enough money without taking some of mine.

Do I sound bitter? Oh, my goodness. If you knew how much I’ve spent on weight loss programs over the last, oh, FORTY PLUS YEARS – you’d be a wee bit touchy yourself. Am I slim and lovely? Hell, no. First I was a fat little kid. Then I was a chubby teenager. I had brief periods of being semi-slim when I was in the market for a husband (and later for a new husband), but none of those frogs turned into princes and constant dieting gets OLD. So then I was middle-aged and fat. And now I am almost old (depends who’s asking) and still fat. Do you see a trend here?

These days I am trying to exercise more. I am trying to eat a little bit more healthily. My goal to keep traveling (without needing a seat belt extender) and having fun until I’m at least 80. But am I going to pay Weight Watchers and Oprah to help me lose maybe 20 pounds that I’d probably pack right back on as soon as I’m sick of counting points?

Hell, no. I may be stupid, but I’m not delusional.

Now, do I really hate Oprah? Of course not. I’ve certainly never met the woman and I simply don’t believe in hating anyone, as a rule of thumb. My sister is doing well with Weight Watchers, so I know it works for some people. Maybe it will even work for Oprah. What do I know?

I think I’ve been a Weight Watchers member six or seven times, at least, over the last 30 years or so. I always lost some weight. Well, except for that time I never went back after signing up once again, then immediately hated everyone and everything about the first meeting. Not my tribe.

Even at more congenial meetings, showing up every week to get weighed and motivated made me a little bit crazy. I am so competitive (read old blog post about what a sore loser I am), that if I didn’t lose what I thought I deserved to lose at the weekly weigh-in, I’d be so furious, I’d go out and eat crap after the meeting. Don’t bother pointing out that no one is hurt by that but myself. Duh. What I finally admitted to myself is that I don’t play well with others when it comes to dieting because I want to be the winner every single damn week and I’ll be irrationally angry if I’m not. I’m an asshole. I maybe need a twelve step program for maniacally competitive assholes – not a group diet program.

So what’s the point of this rant? Absolutely nothing. I just felt like it. And maybe it entertained you.

Do you have a diet story to share? Are you fed up with lining the pockets of every entity that sells diet books and diet meetings and diet foods and diet pills and even weight loss surgery and, well, you-name-it? Do you own everything from an old Suzanne Somers thigh-master to a comprehensive video and DVD library including favorites like “Buns of Steel” and  Richard Simmons’ “Sweatin’ with the Oldies” and “Yoga for the Rest of Us” (read: for the Old and/or Fat)?

Hell, if I had all that money back, I could take a year off to explore Europe, and guess what? Every time I travel there, I lose weight while eating pretty much whatever I want. All that walking and exploring burns off the pasta and gelato like magic.

So instead of joining another weight loss program or buying a home gym, put that money in the bank and save it until you have enough cash to treat yourself to a fun, active trip somewhere wonderful. That is my diet advice to you. And it’s free. You’re welcome.