How To Do Empathy Right

We traveled this year for the holiday.

Not to see family, but to be family. It was inspired by friends of ours that were doing the same thing, and the fact that this will likely be the last time our son has several weeks off at the holiday, at least for the near future.

It was full of great food, lots of hiking, and Dominoes.

There were scores of parents with young kids around. I watched as they chased their delighted toddler down the airport concourse, snatching them up before they were run over by the beeping passenger cart. I reminisced as fritters were cut up, hands were held tightly, and smiling eyes responded to “Watch me, Daddy’s“, as a child pulled herself up onto a fortress wall.

That was a great part of parenting. Helping, guiding, and protecting my child in his vulnerability was a job that I loved.

My 21 -year-old son now reached for my hand, as we hiked the famous rain forest in Puerto Rico. As I am scared of heights and have trouble with balance, (two things that definitely impair my ability, but I don’t allow to mar my enthusiasm), I needed his strength and calm, when there was no railing or the steps were very deep and slippery.

My husband was behind me, also carefully watching.

I felt tremendously loved, and cared for in my own vulnerability. I felt known, and understood.

And the rain forest was breath-taking.

Maybe you’re afraid of certain things, like flying or being in elevators. Maybe you’re self-conscious about the way you look,  or are more shy than the rest of your family. Instead of being supported, you’re ignored and expected to get over it.” Or you’re teased and openly, sometimes viciously, criticized.

Empathy is the capacity to put yourself in someone else’s shoes, and feel what they might be feeling. It’s different from sympathy, where you feel sadness for them. You are simply emotionally with them.

Empathy is a gift that’s simple to give, and a blessing to receive.

It leads to kindness, and patience.

And when you’re looking down a deep ravine, covered in exotic vines and trees, listening to water gushing down huge black rocks, and you’re a bit wobbly in your knees?  A little empathy goes a long way. 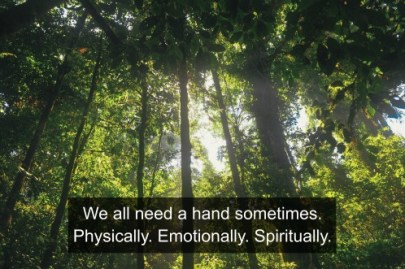 Sometimes you have to teach someone to be able to verbalize empathy. I have heard men and women alike, say, “I want to try to understand, but I don’t know the words to say.”

Remember that empathy can be shown by actions. Putting words to what you feel can come with practice. Asking yourself, “What would I like to hear?” Or actually telling someone, “Right now,  I’d love to hear you say….”.

Sometimes people are intentionally mean or withholding.  But often, it has little to do with intent, and more to do with lack of skill. If someone didn’t grow up in a family where empathy was demonstrated, they’re not likely to be able to share it easily.

Receiving #empathy from your parents helps you feel known. You can then give that to others.
Powered By the Tweet This Plugin

Two people can feel much closer, if they don’t judge each other for a struggle with empathy, but understand it may be easier for one than the other. Then, work on it together.

As you do, you’ll be teaching your children as well, as they watch, and listen. They can grow into empathic people themselves.

We all need a hand sometimes.

When it comes from someone you love, it means everything.

How To Do Empathy Right was last modified: January 11th, 2016 by Dr. Margaret Rutherford