How I Got Back With My Husband 27 Years After Divorce

If there’s one thing women are most interested in, it’s how my husband and I got back together some 27 years after our divorce. It seems inconceivable that we could resurrect a marriage after so much had gone down and after so many years.  I understand the fascination. I’m fascinated, too, and it happened to ME!

So, here’s what happened:

Like everyone else, I got married (young) with all the best intentions in the world. Very few of us ever walk down the aisle with the idea that divorce could happen. Some. But few. And certainly not me.  So when M. decided to leave after eight and a half years of marriage, it took me by surprise.

When all of my best efforts to salvage the marriage failed a deep, dark depression hit.  A big part of that was that I hadn’t anticipated the possibility that he’d leave. It never occurred to me.  So when he did, it was a huge shock.

At the time, I was only 29 years old with a lot of life in front of me, but I didn’t see that at the time. To me, the world had ended.

I spent a few months having a pity party, complete with music. The lyrics to the music were repetitive: I’d done NOTHING wrong. He’d LEFT. He was the one responsible for the demise of the  marriage. I had nothing to do with it. Yadda yadda yadda.  1980 and 1981 had some good pity party songs, too, like I Will Survive.

Blaming him was a way that I could avoid looking at myself. I think I knew that if I actually looked at my role in the failure of our marriage I’d have to own part of the responsibility and that was just too unbearable to consider.  Could I have actually been responsible for this?

No, I couldn’t even go there at first.

But I needed to. 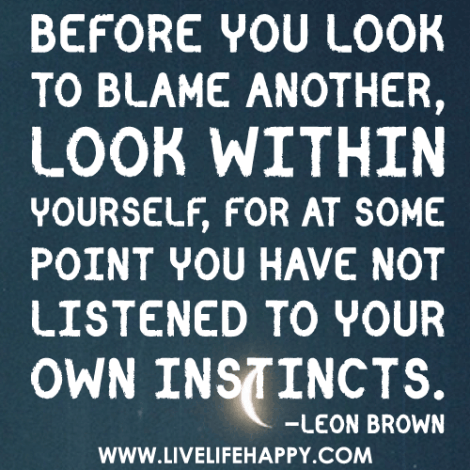 I needed help, so I found a good therapist.

I went on with my life. Made some bad decisions, but moved forward anyway.  Over many therapy sessions and many years, I got the courage to really look at what had happened in our marriage. Squinting through eyes that didn’t want to see, not at first, little by little the truth became clear:  I had an equal role in the ending of our marriage.

Once I could look squarely at that fact, stare it down and own it, my real healing began.

This process took eight years, a failed rebound marriage and a move from Florida to California. That’s the thing about it–understanding and healing come on their own timetable. They can’t be forced.

M went on with his life in Florida, of course.  We hadn’t had any contact since our divorce, none at all. But here it was, eight years later and I was ready to say something to him.

I wanted to tell him that I’d been wrong to blame him entirely. That I’d seen clearly my own role in our divorce and the ways I’d hurt him. And I wanted most of all to apologize.

I didn’t want him back. Not only did I think it was impossible, I had no interest in reconciling.  I just wanted my own life back and these were things that I thought needed to be said. For me.

So, just after the 1989 Loma Prieta earthquake, I called him. He sounded surprised to hear from me. We talked for about 20 minutes.  It wasn’t emotional. I didn’t feel any great rush of anything but relief after we hung up. I felt I’d done what I needed to do for my own healing and that I would be able to have a healthy relationship one day.

Of course, I had to give up my pity party. It was clear that no one was really to “blame.”  Not even me. We all do the best we can at the time and are better or worse equipped than we wish we were.  It really is true that shit happens. Blame does not have to be assigned. And should not be.

That’s tough, I know. It IS tough. And forgiveness is no cakewalk. It’s often a long time coming for me and this was a big one to forgive. But, my God, we were KIDS. What did we know about making a relationship work?

Nothing. We knew nothing.

We did the best we could.

My memories were no longer sad or bitter. They were just a part of my past and I was busy living my present and preparing for my future. Making new memories.

Someone might look at the outline of my life and think, “I could never do that.”  Because I went down roads I probably shouldn’t have, made very public mistakes, hurt people and was hurt, myself.  But I wouldn’t change one minute of it. It was the path I had to take, the way I had to learn and to tell you the truth? It was WAY FUN. 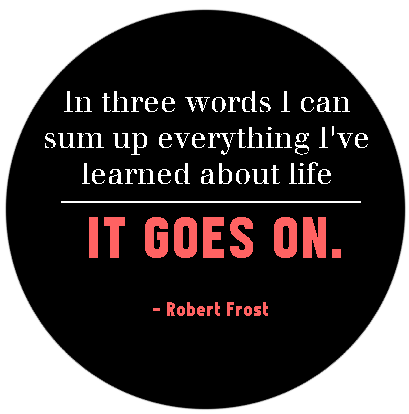 Life goes on, if you let it.

I let it. And because I did:

the door was open –just a crack– to remarriage. I didn’t know it was open. I didn’t see it. I wasn’t looking for it.

But once you’ve said everything there is to say to each other, the only thing left to say is I love you.  I learned that from Werner Erhard and it stunk of truth.

When M first approached me about remarrying I thought he was crazy. Or at minimum, a grief-stricken widower.  But I was willing to talk to him, even as I told him I wasn’t interested.  You can only imagine how long it took to debrief each other on the past 40 years. On emotions and situations and… well, all of it. Many hours of telephone conversations. And months before I would see him.Why rush? It had been 27 years since we’d seen one another.

He was back from the start. And slowly, very slowly, I came back.

Once we finally got together? The conclusion was obvious.  We celebrate our fifth anniversary next week. Or our 42nd, depending on how you count.

So that’s how it happened, the important stuff, anyway.

Life really is all about love and forgiveness. And if you’re willing to do that work? The Universe can reward you in a big way.

Most days at the gym I’m on a cardio machine behind him. I watch him work out and think, “How on earth did this happen?”  Because even though I know the story I told you very well, I get how unusual it is. And also how miraculous.  After that? The only things left to say:

Thank you. I love you.

How I Got Back With My Husband 27 Years After Divorce was last modified: July 23rd, 2014 by Carol A. Cassara