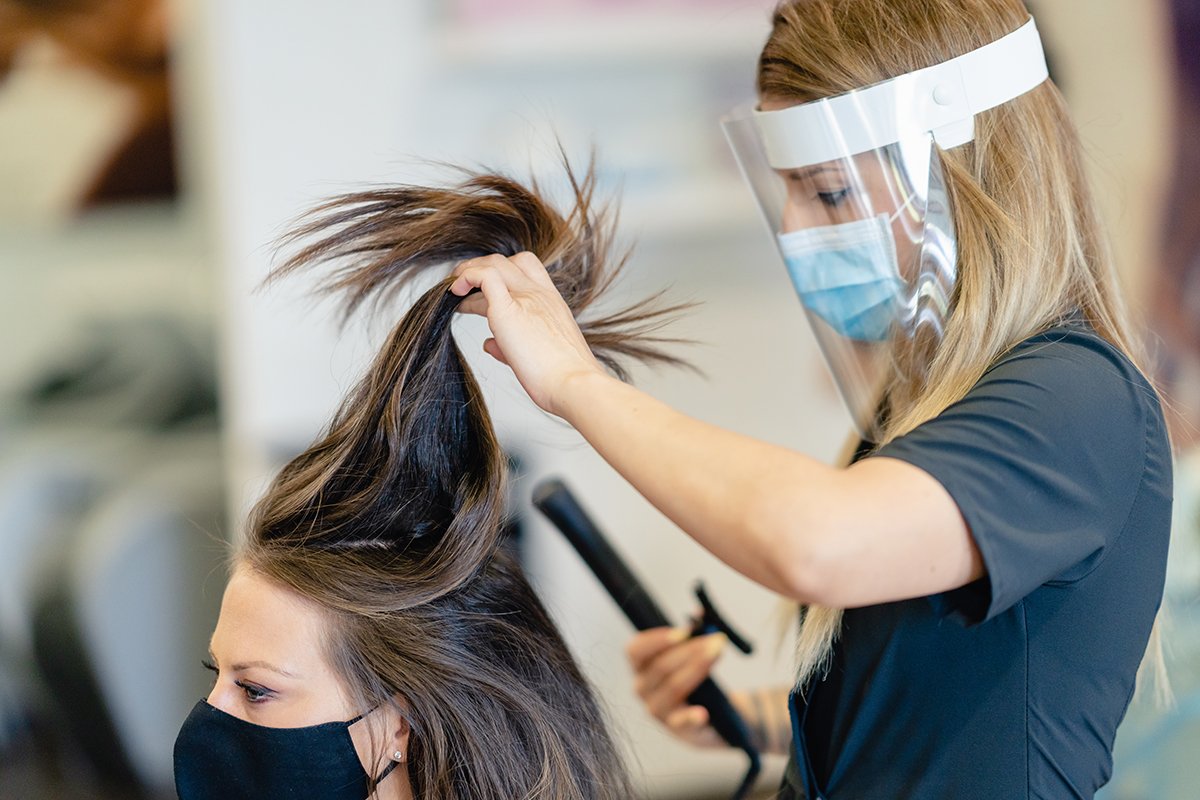 How Hair Salons Will Be Transformed by the COVID-19 Pandemic

Last Friday, veteran hairdresser Van Council officially reopened the doors to his six Van Michael hair salons in Atlanta after Governor Brian Kemp lifted the statewide shelter-in-place order. Since then, the rest of the hairstyling community in the U.S. has been watching closely, experiencing a cocktail of emotions: fear, curiosity, and eagerness among them. This wasn’t just because Kemp’s decision was something of a wild card (health officials have warned that it might be too soon to loosen restrictions); Georgia is also now at the forefront of what could be a brand-new world for hair salons post-pandemic.

While not considered essential in many countries, people have suddenly realized how much they rely on their salons as a comforting source of self-care and community. And while they aren’t necessarily crowded places, they require intimate interaction—how could they comply with social distancing? The question came up at one of President Donald Trump’s daily coronavirus briefings, creating fodder for The Late Show With Stephen Colbert. “Barbers and hairstylists just need to be very creative, like duct-taping hair clippers to a couple of yardsticks or just submerging their customers in Barbicide,” the host joked.

But what could reemergence actually look like in this particular sect of personal care? Since March, Council, an Aveda expert and educator of more than 30 years, has been participating in advisory-board meetings to determine a plan. The primary rules for the Van Michael salons are as follows: Salon volume will be kept at a minimum of 50%, with stylists working at every other station at least six feet apart. Before entry, clients will wait outside and have temperatures checked. Once inside, all stylists will be wearing plastic shields and masks, while clients are required to wear masks. Belongings must be limited to a phone and form of payment—no handbags. Regarding services, there will be no blow-drying to avoid an airflow of germs, and that will also cut down on in-salon time.

“The first two days we were open, we averaged about 250 clients a day across all the salons,” Council explains, adding that they’re only seeing returning clients and that the most popular treatments are regular haircuts and color touch-ups, many for gray roots. In addition to keeping his staff safe, he wants to be sure they’re not going to get run down in this new, challenging environment. “It’s hard to work in a mask and shield,” he emphasizes of the realities of working with a large sheet of PVC covering the eyes, nose, and mouth. “We have stylists and colorists rotating, working two days on and two days off.”

In addition to managing a surplus of requests under extreme circumstances, Council has been receiving a flood of outreach from fellow salon owners across the country. “I probably have had 200 salon owners send me texts or messages through Instagram or Facebook over the last few days, asking ‘Where do we get shields? Where did we get hand sanitizer?’” he says. “I was very nervous and scared to open—all the eyes are on us. But it’s nice to be able to try and set the standard for the industry here in the U.S. because I care about it so much. It’s our job to step up and make this work so that everybody can reopen safely.”

Van Michael salon is serious about your safety

The new safety and health procedures being put forth in Georgia are not without global precedent. As the spread of COVID-19 began to slow in China, where the virus first appeared in December, some hair salons, barbershops, and other personal-care businesses started to reopen in March, with cautionary measures. Stylists wore face masks, hazmat suits, and gloves; implemented new sanitation strategies; limited volume; and spaced out seating per social distancing mandates. In Japan, where hair salons and barbershops were technically allowed to remain open as essential services during the state of emergency, the approach is similar. “When drawing up a plan, I had the advantage of partnerships with salons in Tokyo and took cues from what they were doing,” explains Council.

One stylist in his network is Masa Honda, owner of Kanagawa Prefecture’s Masa Aveda salon. That salon is currently closed but is navigating its reopening plan by exchanging information about health and sanitation practices with other salons in Japan, as well as those in other countries. “Safety is our number one priority,” explains Honda. “To help clients and staff feel safe, we’ve made a new service routine that accounts for when a client steps into the salon until they leave, including wearing masks, checking their temperature, and doing a short health questionnaire before their visit. Since the salon is a space where many people gather, we will avoid having too many people at the same time, and things that cannot be sterilized, like magazines, will be put away.”

For the Toni & Guy salon in Geneva, which reopened on Monday as Switzerland is gradually easing restrictions, looking to other countries has been key. “When I first heard that we were going to reopen, the Swiss government did not provide clear guidelines at that moment, so I was worried about the safety of my staff, my clients, and the feasibility of reopening with restrictions,” explains salon manager Olga Tetard. “We are part of a global brand, and I knew that when my colleague in China reopened, their restrictions were so heavy—only allowing one client at the time in the salon—that it made more sense for them to keep the salon closed longer.”

After the Swiss government announced the decision to reopen, Tetard immediately put together internal safety rules, then built on them in weekly Zoom meetings with Toni & Guy partners around the world. “Our China partners who were experiencing the COVID-19 situation before us shared their experiences and have provided amazing support during this crisis,” she says.

Eventually, one week before the opening, the Swiss hairdressing organization CoiffureSuisse released a safety guide. “What we were putting in place was fully compliant with their proposal, so we were happy with this,” adds Tetard. So far, the salon’s new way of operating—including mandatory face masks, half the capacity of chairs, six feet between each chair, and daily deep cleanings—has been going relatively smoothly; it’s just a matter of managing demand and staying healthy, she says.

“I think there has been a universal understanding of how to operate, which includes all of these health protocols to make sure that salons are the safest they can be,” says hairstylist Sally Hershberger, who has three eponymous salons in New York as well as one in L.A. She has been closely studying the guidelines set by the CDC, FDA, and State Board of Cosmetology for both New York and California. “While each country will reopen and operate differently, I’m paying the closest attention right now to Georgia, and I want to learn what is working for them and what practices we will want to avoid.”

As more and more salons begin operating at reduced capacity and with extreme protective measures, Hershberger believes the COVID-19 pandemic will have long-lasting effects on the salon industry. “Sanitation has always played a huge role at salons, but I think people will take it more seriously than ever before,” she explains. “Most stylists don’t wear masks while doing hair, but it could become permanent attire. With social distancing being such an important player in flattening the curve, I believe that salons won’t be operating at full capacity for quite some time. Appointments will be more limited and spread apart, and salons may not be a place to gather for a while.”

So too agrees Edward Tricomi, cofounder of the Warren Tricomi salons, who believes that even when things return to something a little closer to normal, it’s inevitable things will shift permanently. “We’re going to get through this and learn and grow from it,” says Tricomi. After seeing his stylists and clients find success with virtual consultations and at-home color kits, he thinks that salons will learn how to harness technology better.

With the first phases of reopening being carried out both internationally and stateside, salon owners see glimmers of hope while coming to grips with the financial havoc that’s impacted their businesses. For Salih Watts, the owner of natural hair salon Loc Lov (which has a beloved D.C. flagship and recently opened a new location in L.A.), it’s about staying as resilient as possible to support and stay positive for his community. While stay-at-home orders remain in place in D.C. and L.A., Watts has released a meticulous reopening safety plan that covers everything from health screenings and questionnaires to best mask practices. “We released a safety plan before most salons to ensure that my clients and staff felt safe and relaxed before, during, and after their salon experience,” explains Watts. “I purposely got in front of this effort early because 95% of our clientele are African American, and we have the highest mortality rate from COVID-19. We have been a leader for other salons, and now more than ever, I wanted to put out something that could influence other salon owners.”

Like many in his position, Watts is feeling the financial pressure, going through all the motions for first-come, first-served government loans and grants and hoping his salons, particularly his younger and less established L.A. location, will be able to survive. “Unfortunately, we were only open for nine months before this happened and don’t have enough of a following to sustain the expenses we will have once this is over,” he explains. “The plan is to generate enough revenue on the East Coast to sustain the West Coast until we are able to open again. But without sufficient funds, Loc Lov L.A. will surely have to close its doors, and that would be absolutely devastating.”

The global pandemic has prompted a seismic shift in every facet of our existence. While haircuts and color changes aren’t the most pressing of all needs in this devastating time, the collective longing for them is telling of the invaluable role that hairstylists and salons play in our lives. “Our clients are like family, and we’ve spent years getting to know one another, which makes this quarantine that much more difficult,” says Watts, who upon closing his salons pivoted to a dynamic virtual strategy, creating classes for at-home hair care, DIY product development, and restorative yoga. “It provides a sense of family belonging and connection that’s reminiscent of what clients are accustomed to when we’re together at the salon.”

For Hershberger, the salon has always been much more than a place to get your hair done. “We build relationships with our clients, and when we don’t have that routine place where we can socialize and interact, it can feel like a part of us is missing.” She’s been bridging the gap with her own clients by offering virtual haircuts and donating half of the proceeds to Direct Relief. “Beauty routines play a huge role in our daily lives,” she adds. “When you can’t go get your regular root touch-up or get a bang trim, your everyday life can feel out of whack.”

Having always been a highly personal hairstylist, Tricomi believes the bond between client and hairstylist has always been strong but will be even stronger on the other side of this catastrophic event. “I think people will be more appreciative of who we are as hairstylists,” he says. “You never know what you’ll miss—until you miss it.”

How Hair Salons Will Be Transformed by the COVID-19 Pandemic was last modified: June 18th, 2020 by BA50 Talkers