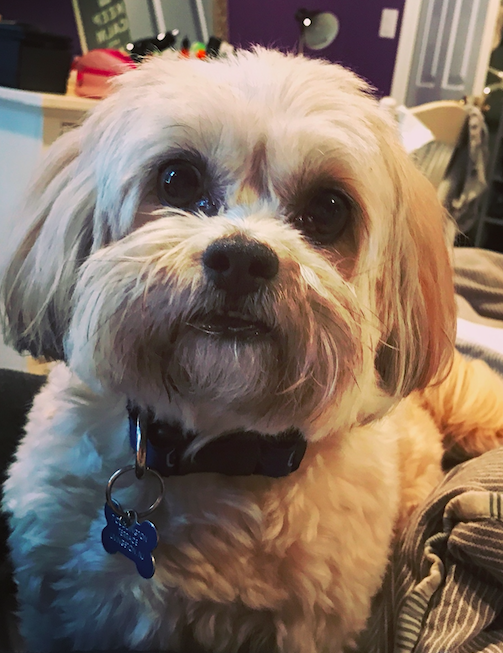 How A Dog Saved Our Broken Family

As the words were coming out of my mouth, I wanted to pull them back in. What was I saying? Did I just offer a dog to my 10-year old daughter? Didn’t I already have enough on my plate? Was I crazy?

Three months earlier, my husband had suddenly passed away. Our two daughters were 10 and 12.

This was the saddest and most difficult thing I had ever been through. My own pain was horrible, but seeing my children suffer the loss of their father was almost unbearable. We were going through a terrible time, but trying to survive the best way we could.

I had just picked up my 10-year-old from a day at a friend’s house. My girls were always happy to be with friends; it took their minds off what had happened, even if for only a few hours.

She talked about her friend’s golden retriever, Buddy, from the moment she got in the car, and did not stop during the entire drive home, “Buddy is so cute”, “We took Buddy for a walk”, “Buddy loves me”, “I love Buddy”.

As she was speaking, a thought popped into my head, “A dog might bring a little happiness to our lives”. Instead of going home and taking some time to process this thought, I just blurted out the offer of a dog in our home.

“Really? Yes! I want a dog!” was my younger daughter’s response as she practically jumped out of her seat.

Becoming a single mother without warning is not easy. My happy, easy life was gone, and I had stresses I never imagined having. I was raising two grief-stricken girls on my own while being grief stricken myself. I had financial worries, house worries, emotional worries, and time-management worries, just to name a few. I no longer had a partner to share the burden with.

Why was I offering a dog to my daughter? I knew that having a puppy would be difficult. He would need to be trained, which would take some time, plus I was sure that the responsibilities of having a pet would all fall on me. Did I really need this added stress on top of the load I was already carrying?

When we got home, she ran into the house and screamed to her sister, “Mommy said we can get a dog!”. My twelve-year-old came running down the steps just as excited as her sister.

I looked at their happy faces. I had not seen many smiles on them over the last few months. There was no way I could possibly disappoint them. We were getting a dog.

We did some research. As much as we would have loved to adopt a rescue, my twelve-year-old and I both have terrible allergies. I could not risk falling in love with a little face that we would both be allergic to and therefore, not be able to keep.

We decided on a shih poo, which is a mixture of a shih tzu and a poodle. They are small, adorable, and hypo-allergenic.

Which dog to choose was a surprisingly easy decision, but deciding what to name our new baby was the cause of many arguments. My twelve-year-old only wanted an “odie” name – Codie, Brodie. Bodie, but her younger sister did not like any of them.

As they were having what seemed to be their 15th argument on the subject, an idea came to me. “What if we name him something that makes us think of Daddy”, I asked. “Your dad was such a huge Bruce Springsteen fan. What do you think of naming him Bruce?”

I was expecting a negative response but, to my surprise, they both loved the idea.

Our little Bruce arrived, and it was love at first sight for all three of us. I have always heard people say that dogs bring happiness, but I did not understand this until we got one of our own. When that adorable little face greets me at the door and jumps all over me, it truly makes me smile. He can brighten even the most miserable day.

The best thing for me was seeing my daughters happy and laughing again. He can always put them both into a better mood, even when they are at their worst. Sometimes just the mention of his name can get them to smile.

I was right about one thing; a pet is a huge responsibility, and that responsibility has fallen on me. Although I do complain sometimes, it is totally worth it.

There is a void in our family that can never be filled, but we did find something that has helped a small portion of it. Bruce brings joy into our home where there was such sadness. I never thought I would fall in love with him the way I have.

Whenever I speak with another widow, one of my first pieces of advice is to get a dog. I may not have thought I was ready when I suggested it to my girls, but I have not regretted it for one moment.

How A Dog Saved Our Broken Family was last modified: December 14th, 2017 by Stacy Feintuch