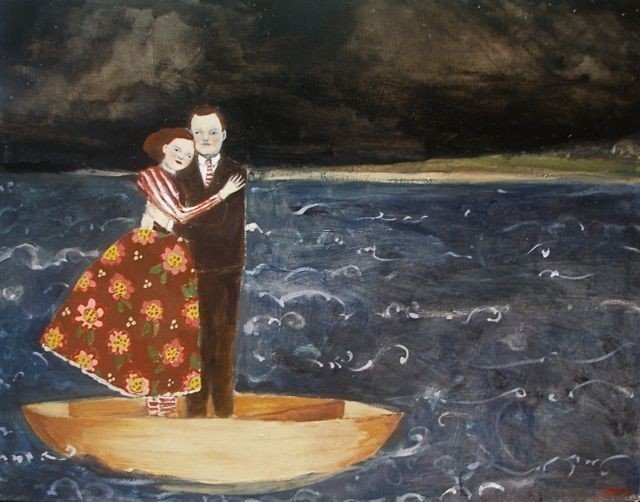 Holding on To Love

The textbook definition of someone who is a newlywed is “someone newly married.”  If you ask any newlywed, they would perhaps describe it as “a blissfully unaware individual entering in a life long partnership with someone they think they know but with whom it will take a lifetime to get to know.”  If you watched the Newlywed Game in the 70s you saw the many matches or mismatches and wondered how these relationships lasted. What happened to the guy who didn’t remember his wife’s long lost cat’s name; or the woman who couldn’t remember her husband’s favorite sexual position?  What I do remember is sitting with my husband watching the reruns of the show and laughing.  We believed that we didn’t need a piece of cardboard and a Sharpie to answer any of these questions since we supposedly knew everything about one another.  We were more concerned with our plans for the future: our careers, where we would live and, of course the five children we were planning on having.  We morphed out of being newlyweds into the lives of a married couple and then eventually parents.  We laughed, we cried, we shared moments together, and other times we kept our distance.  We fought hard, and we loved even harder, and most importantly we focused on our children.  The laughter and tears came to a halt when my husband, Ron, lost his two year battle with melanoma.  We thought life’s road would lead us down the traditional path: marriage, children, sending the children off to college, collecting social security, traveling the world together, and then ending up in the nursing home while screaming loudly at each other’s deaf ears.  Till death do us part was supposed to mean into our late 90s, but for us, it meant that Ron was gypped at the age of 42.  Our family lost a son, a brother, a brother-in-law, a son-in-law and a great friend.  My children lost their father, and I lost my husband and best friend.

Looking back now, four years later, and speaking to women who have called me after having recently lost their spouses, I’ve come to look at that first year as the year I become a “Newly Widowed.”  I was numb and like a newlywed, blissfully unaware of my emotions.  I was surrounded by family and friends who called me, checked in on me, cooked for me, and made themselves available by making sure to include me and the kids for dinner or nights out.  Like newlyweds, it was the year of many firsts: the first birthday without Ron, the first time we laughed without him, the first time I picked up the phone to call him realizing he wasn’t there, the first holiday and vacation without him, and the first time I watched our favorite show, Seinfeld, alone.  Each milestone as a Newly Widowed was faced with anxiety and wanting but mostly wishing-wishing that he were there to share in the moments lost.  And then it dawned on me- as much as we were missing Ron, Ron was the one who was missing out the most. I can recall sitting and watching my children in their various school performances with tears in my eyes knowing how much he would have loved to have been there.    There were many firsts that year and I was in unchartered territory.  The one person I shared everything with and the person who knew that I snored at night, the person who could finish my sentences, make fun of me, and knew about my giant, holey underwear was no longer there.  I found myself reminiscing about the days when we first met, our first kiss, our first trip away, and that first year we were married.  I can remember after two months of marriage arguing over personal time and space and then doing what we were told not to do-going to bed angry with one another.  The next day, I awoke, went off to work, and then called my mother and told her how difficult it was and that this wasn’t what I had expected.  She reminded me that you can’t always agree and that we had signed a contract which was a reminder of all the reasons we decided to marry-you loved each for richer or poorer, in sickness and in health, and beyond.  It’s not easy, but it’s worth it.  Chalk it up to being a newlywed and enjoy making it up to each other.  She was right of course.  We learned that first year how to morph into each other’s worlds, how to stay clear when you needed space, and how to remember to look into each other’s eyes and remind ourselves of why we got married.  We were in this together.

After 14 years of marriage, ours ended with me holding Ron’s hand as he took his last breath.  I left the hospital that oddly-warm March evening as a widow, entering new waters.  There was no road map for what lay ahead for me, my children, and our family.  Like our first year of marriage, there was no manual that told us how to behave.  That first year of marriage and thereafter, Ron and I only had to continuously remind ourselves of why we were married-because we were in love and that is something you can’t give up on.  In death, I had to remind myself that our love still continues even though Ron isn’t physically here.  His voice of reason comes through when I have discussions with the children, his humor comes through when I need to laugh, and his love shines on all of us.  Along with my family and friends, we were able to get through that year of “firsts.”

Over the next few years I met many women who had lost their spouses, and our connection was instantaneous.  We shared our thoughts, we cried on each others’ shoulders, and we laughed at the most obscure things, but most importantly, we shared a bond.  It’s our special club that we wish we weren’t a part of but one where the members can truly relate.  Unfortunately, Newly Widows are continuing to join our group, wanting to know where we are, what our lives are like, and how we feel.  We can now share our thoughts and help them navigate through this unknown territory.  We don’t pretend to have all the answers.  We are simply there to listen and to share.   As for me, I am no longer the newly widowed.    I morphed into the widow with children, and then I become the single mom with children who happens to be a widow.  But throughout it all, I still hear Ron’s voice, I see his face in my children, and I know he is up there watching over us and telling me to throw away that underwear.

Holding on To Love was last modified: October 23rd, 2012 by Nanci Gelb