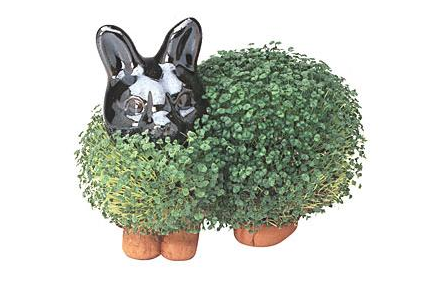 Hold the Chia! In Search of the Perfect Summer Diet

I blame the Chia seeds. Those tiny brown seeds are the reason I joined so many others last week in search of the perfect summer diet. “Chia
seeds?” you are probably thinking, “Are you quite sure it wasn’t the dark chocolate or the red wine?” Yes, I’m quite sure; I learned the hard way that Chia seeds are to fifty-somethings, as Cracklin’ Oat Bran is to college students. This is an analogy your high schooler never came across on the SAT, but if you were ever a Cracklin’ Oat Bran addict, I know you understand.

Formally sprouted on terra cotta figurines, and now touted as a perfect health food, Chia seeds are packed with Omega-3s and dietary fiber. For weeks I added Chia to nearly everything I ate, and four pounds later, I had the brilliant idea to look up the nutritional information. At 65 calories/tablespoon, I had literally been pouring hundreds of Chia calories into my smoothies, plain yogurt, and almond milk. I wanted to scream, but I made Chia garbage instead. The ground flax may be next.

Seeking out the perfect diet to shed my newly acquired Chia fat, I ran across the old standbys: Weight Watchers, Atkins, South Beach, and portion control. But I had been there, done all those (except the portion control, of course.) I was looking for something new, something easy, something rad, something that did not require much self control. My research did not disappoint.

Talk about new and innovative, Japanese “diet goggles” took the proverbial cup-cake… and turned it full size! Using computer wizardry, this eyewear tricks your mind into thinking that a tiny portion is actually a huge one, that something plain is actually something tasty. The Oreo gets bigger, but the calorie content stays the same. Yay! Stephen Colbert even suggested that one might wear the goggles backwards, with the effect of making your ass look smaller (making this the perfect father’s day gift for my husband.) Unfortunately, these Japanese goggles are not yet available. When they are, I hope they make them in bifocals; I want to read the menu too.

On the other end of the spectrum, there was the diet my friend made up. She swore it was good for 20 pounds in the two weeks before her sister’s wedding. Week One: only greens-no oil, no butter- only raw or steamed. Week Two: only egg whites. Honestly, I’d rather be in prison (they feed you better).

Kate Middleton went on the Dukan diet to slim down before she tied the knot with Will, but even the names of the diet phases scared me: attack, cruise, consolidate, stabilize. I thought I needed something kinder. With the “Mindful Eating” diet, you “tune in” to your food: the texture of the pasta, the flavor of the cheese, the bright color of the sauce, the aroma of the steam. If you eat mindfully you might decide halfway through (“might” being the operative word) that your body had enough. But this seemed too challenging for someone who grew up at a dinner table where the motto was, “You snooze, you lose”.

I liked the idea of the “Serenity Diet,” because the headlines said that you could “think your belly fat away.” This was compelling, as I do some of my best thinking over wine and cheese. Digging deeper, though, I realized this diet too was all about tuning in to the physical sensations of hunger, fullness, and taste satisfaction. The article suggested that as an exercise, you take 10 minutes to eat and contemplate three raisins. I stopped reading after that.

The African Mango Seed Extract Diet sounded terrific, and we all know that pills are often an easy answer- especially when it comes to diets. The reports that some of the pills have been known to contain extracts from the wrong plant species and just might be a bit dangerous concerned me, however. I thought I might want to go with fruits and vegetables I could buy whole at the local market.

One web site suggested eating mulberries and gooseberries. Another suggested chilled soups, watermelon and grilled vegetables. Another said buttermilk for digestion, cilantro for spice, and curd, instead of ice cream. Do they even sell curd at ice cream parlors? If they did, could I even say: “I’d like a large chocolate curd in a cone, please?”

Really, I don’t want to diet. What I want is to want to eat less in the summer. I want to be like the skinny girls who say, “man, it’s too hot
to eat!” and mean it. In my world, it’s never too hot to eat. There is always ice cream: floats, sodas, frappes, in a bowl, in a cake, in a cone, on a pie. All of them perfect for summer.

So to hell with the summer diets; I’m convinced there is nothing magical out there (until the goggles are commercially available anyway). I
think I will just try to eat sensibly, order a small ice cream instead of a medium, ride my bike up a few extra hills. Perhaps I will tell the guy behind the ice cream counter to add just a few chocolate sprinkles.

But without a doubt, I’m going to tell him to hold the Chia seeds.

Hold the Chia! In Search of the Perfect Summer Diet was last modified: June 18th, 2012 by Ronna Benjamin