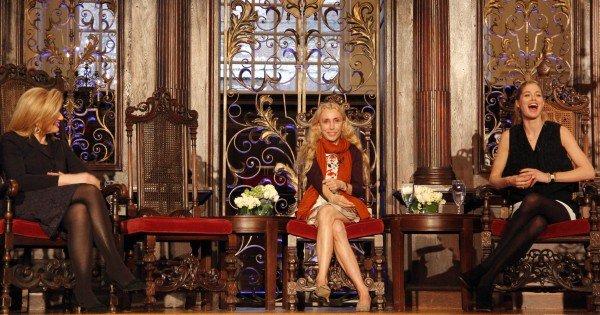 Health is beautiful, for sure.  But as long as we are healthy, are we also beautiful?  That was the topic at the 15th Annual Harris Center Public Forum, “Health is Beauty: Defining Ourselves,” at the Memorial Church at Harvard last week.   This year’s keynote speakers were Arianna Huffington, Editor-in-Chief of the Huffington Post Media Group, Franca Sozanni, Editor-in-chief of Vogue Italia, and Amber Valletta, fashion icon and actress.    The forum left me ravenous for more substance.

I can listen to Arianna Huffington all day.  When she talks I think of Zsa Zsa Gabor, even though Arianna is originally from Greece, not Hungry (oops, I mean Hungary… I guess this forum really got to me.)    But it isn’t just the accent.  Arianna shines wherever she goes.  She is brilliant and well spoken.   I applaud her for keeping the dialogue going and for being brave enough to talk about her own daughter’s eating disorder.  I loved the personal story of her finding her daughter’s long red hair in the sink after she was being treated for an eating disorder, but she left me wondering why she referred to her own daughter’s struggles in the past.  Under control, maybe… but over?

Dr. Herzog, the director of the Harris Center and an internationally renowned expert on eating disorders was also impressive, but I wanted more.  Dr. Herzog has been studying this problem since before the dawn of term “Bulimia” and he could have taught us volumes about recent developments in eating disorders.   Dr. Herzog was just getting into the interesting stuff, how eating disorders now affect girls as young as seven and as old as 70, when he gave up the podium.  He shouldn’t have. Because then came the bad:

Vogue Italia’s Franca Sozanni made me uneasy.  Franca is a maverick who published Vogue Black (an issue featuring only black models), yet she is also an activist, creating a world-wide network for young people in the fight against a growing number of pro-anorexia websites.  She is to be commended for her activism in this fight.  But as Franca sat on stage, she was diminutive in her chair, swamped by her clothing and her long wavy blond hair.  Her face was just a little too sculpted (had she, or hadn’t she?)  Her right leg crossed tightly over her left knee, and then crossed back AGAIN at her left ankle, for most of the forum.  “Show me a fatty that can do that!” her pointed knees silently said to me.

My friend whispered to me, “Does Franca look anorexic?”

“Duh,” I replied, “She must be speaking about her personal experience and struggles.”   But to my surprise, she didn’t.  Is she just Euro-thin, or is there a problem there?   I tried to get past a woman so thin telling us that her models were too thin, but I couldn’t.   Then, when someone asked her opinion as to whether anorexia was now affecting male models, she responded in her lovely Italian accent, “Male models, I do not like.  I do not care about the men,” and dismissed them with a wave of the hand.   So much for an intelligent discussion about the ever increasing number of young men with eating disorders!   I could not believe that in an audience filled with Harvard students, not a one jumped down her throat.

Only kidding, there was no ugly (just more bad.)  Model and actress Amber Valletta is anything but ugly.  She was born with long limbs and gorgeous features.  She wore her beautiful blond hair back in a ponytail, and admitted she never had a problem with food.    If Amber had something really intelligent to say about body image (which she did not), I don’t think I would want to hear it from her.   Was there anyone in the audience that believed for a second that she could empathize with a young woman struggling with her body image?

Just looking at Amber could make the average woman feel crappy about her own body.  She can’t help that – I understand genetics, after all, I inherited certain less than flattering aspects from my family —  but she could help what she said:  That we women want the fantasy of the unattainable ideal of a model’s body (hers, essentially) but yet need to embrace our own (very average) bodies.  Hmmmm.  The worst thing that happened to Amber seemed to be that some modeling agents years ago told her she needed to lose weight.  Yeah, big deal.   Not exactly the struggle of the average young woman.

And that is exactly who I would have rather heard from.  They should have brought in those young women — the ones struggling with eating disorders, or the teen mentors of this great new program at the Harris Center.    Let us know how the models or the media are affecting them, with their real stories.  Let us know how we can help.  I wanted people I could relate to, not name brands.

And though I applaud The Harris Center for helping  to fund groundbreaking research in eating disorders, in my opinion, they could have – and should have — done better with this forum.