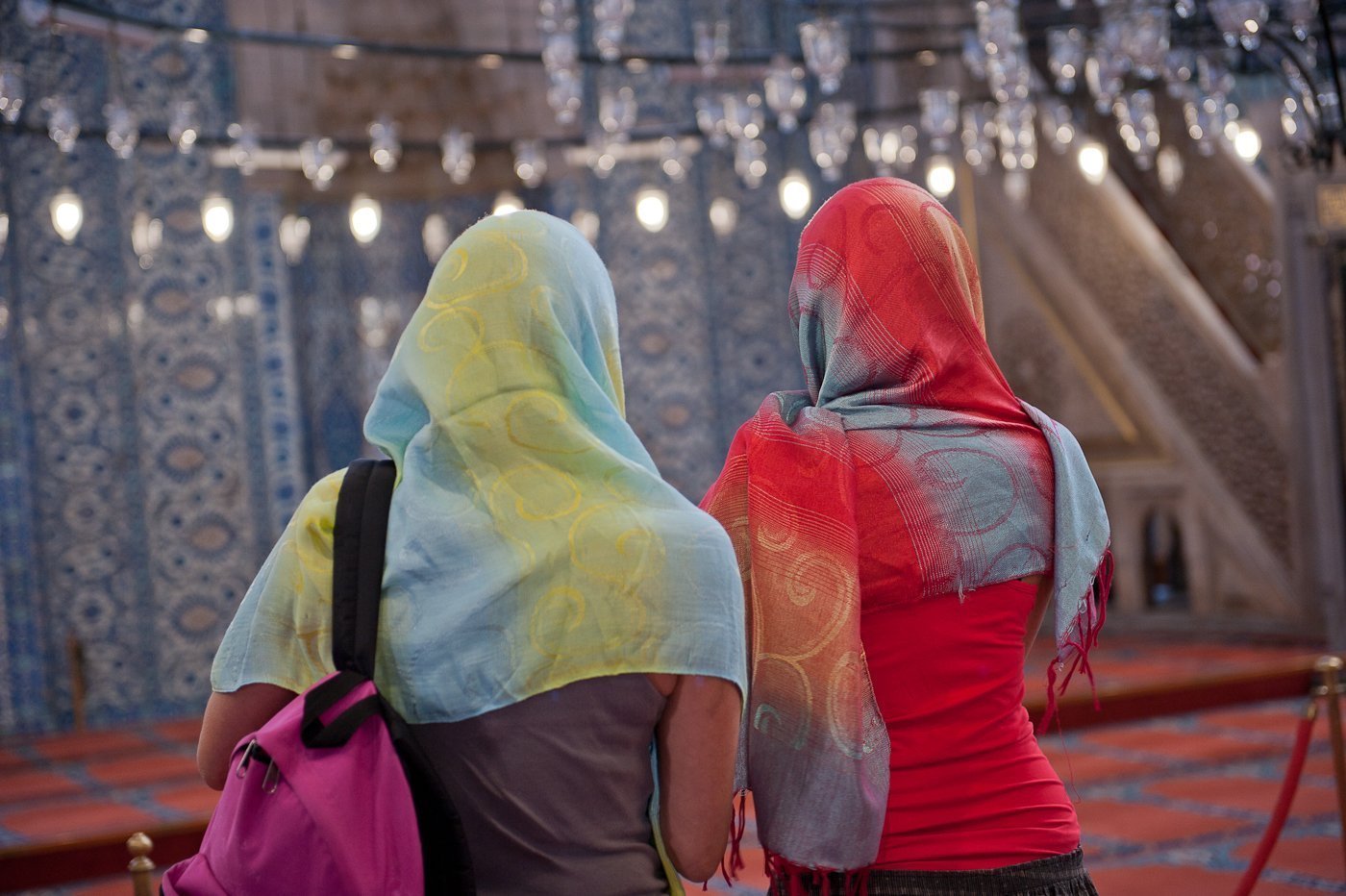 I love Istanbul – A few friends had recommended it but I had no idea how truly welcoming and wonderful this city would be. My preconceptions about Istanbul ran from an unwelcoming religious extreme, to third world, hectic and unsophisticated. I have been proven wrong on all counts. And on the fashion front, I have observed Istanbul as a comfortable blending of western wear and headscarves.

My husband and I have been in Turkey a week and I have become mesmerized by the array of headscarves and have been engaging in great conversations about what they represent. I have interviewed many locals on the subject including our tour guide, a woman I met on the tram, an expat who has lived here for 30 years and my travelling companions. This is what I have distilled.

Not all headscarves are what they appear to be. They are both more and less than you would expect.

Our tour guide says his mom wears hers only when cooking and cleaning and that is out of habit. She was raised wearing one and so she continues. His sister does not wear one and it is of no issue.  According to him, the link from headscarf to religion is a not a straight line.

The researched and educated traveler has been photographing headscarves on her world travels, some of which I share here along with my own. She says they are just what women wear here – it is their way of life. End of story.

The international academic — another well-traveled friend — piped in on the topic saying they are a sign of oppression and her hope is that one day no woman will feel compelled to wear one.

The local Turkish woman on the tram said headscarves are becoming quite the status symbol, and you will see jeweled and colorful designer scarves thoughtfully coordinated completing the outfit.

Our expat friend commented that headscarves are highly correlated today with fashion here in Istanbul. Times are changing, this is a fast paced city and women’s fashions are the barometer of the westernization of this culture.

My guide piped in “We in Istanbul love everything Western.”

On the extreme end of headscarves, at breakfast I observed a woman in a full Burka, which means only the slits of her eyes were exposed. She had a lovely designer pocketbook, red sneakers and a full plate of food.  Curious as to how she would eat with her thick black cloth covering from nose to ground I was surprised when a napkin size square of black cloth was seamlessly shifted away from her chin as she slipped her toast and egg skillfully into her mouth and instantly dropped the draping.  It happened so fast if I had blinked I surely would have missed that a bite had been taken.

Our guide told me that the woman I observed at breakfast could not have been Turkish because the Burka was outlawed in Turkey in 1923 when Mustafa Kemal Ataturk  came into power and began to westernize this country. One of his first decrees was to ban the Carsaf (plain black cotton garb worn from head to toe including the Burka). By the way on the topic of fashion, he also outlawed the red hats worn by Ottomans known as Fez in favor of western hats, introduced the Latin alphabet, and added surnames — the first time they were ever used in Turkey. These were just a few of his modernizing schemes. But I digress – well not completely, because you see politics and fashion are forever closely linked despite the efforts of Ataturk who was committed to separating religion from the state.

So today, when we observe headscarves in fashion, there may be some confusion to us Westerners as to what they “mean.”  I wanted to share my casual on-the-street polling of what these headscarves “represent” today to our Western eye:

Feel free to write in and give us your observations, pictures and comments. Clearly women, fashion and it’s impact on our personal lives are yet another heated topic for BA50’s in the world.