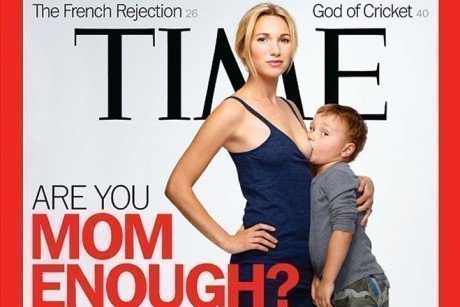 Oh man, if Attachment Parenting is right, boy, did I do it wrong. As we all know from the recent hype, Attachment Parenting advocates carrying your baby around in a sling, co-sleeping, not letting your baby cry, and breast feeding for god-knows-how-long, all in the name of parent-child bonding. Gorgeous Jamie Lynne Grumet adorns the cover of Time Magazine, her 3-year- old son standing on a stool next to her, breastfeeding. Since the magazine came out, it’s been the talk of the town. Call me jaded, but am I the only one who thinks that svelte Jamie Lynne knows all too well that the nursing mother burns about 650 extra calories a day? Doesn’t she look just too darned good? Jamie, if you are still nursing in order to keep thin, it’s working wonders, and I sort of get it. If not, frankly, I’m confused.

Really, do we want stronger parent-child bonding? Aren’t we so bonded with our kids that we can’t get them out of the house? Remember, it’s always a good idea to think twice before using the Super Glue- it’s permanent.

But who am I to judge? (My kids just coughed up lunch). I followed the advice of the doctor gurus of my own time, Dr. Spock, Dr. Brazelton, Dr. Ferber, and most importantly, unlicensed and honorary doctors, Mother and Mother in Law. When my mother advised that it was time to stop breastfeeding when the kid pointed to the breast and asked for milk, I believed her. When my mother in law told me to introduce the baby to a bottle early on, I didn’t listen to her, and I totally regretted it.

We put our kids in cribs, playpens, swings and bouncing things that hung from the ceiling. We put them in those “walker” things that are now banned for safety issues. We put them in the car seat on top of the dryer for a few minutes peace. Heck, I think we might have left Melissa in her car seat for two years straight as we shuttled the older kids to their activities. If our kids gave us a hard time about going to bed, we Ferberized them, letting them cry it out. My friend Jennifer’s pediatrician advised, “put the child in the crib, say goodnight and close the door. Then go in your own room and put the hairdryer on. It will make you feel better.” And it worked.

My son Eddie was tougher than the average bear. Eddie could make himself vomit from crying, which would cause us to come back flying into his room to spend a good half hour in his room cleaning vomit out from between the crib slats. Each evening, as we reached the bottom of the stairs, he would start gagging. We would do a 180, screaming “Noooooooh… Eddie…we’re coming…”, but usually we were too late. Exasperated, we called our drill sergeant pediatrician.

“That’s a tough one,” she responded sympathetically, “but the only way to make him stop is to let him sleep in it. Don’t get him when he vomits. If you can leave him just once, he won’t do it anymore.”

Let the kid sleep in a crib full of vomit? That sounded reasonable. We decided to give it a try. Unfortunately for us, we had forgotten that our intercom system had outside speakers, which were turned on at full volume, and Eddie’s screeches were broadcast to the neighborhood. Yes, we let Eddie sleep in his own vomit (but just for a nap), and yes, the neighbors called to make sure “everything was all right over there.” And yes, it worked.

I asked now 22- year -old Eddie if he thinks he was traumatized by this incident. He thinks he is better off. After all, he says he hardly ever vomits before he falls asleep now. Just before he left for work last week (I know what you’re thinking, but really, there are very good reasons he is still living at home) we were watching Dr. Sears explain Attachment Parenting on the Today Show. “What do you think of all this?” I asked Eddie, trying to keep a neutral tone, just like a good parent should.

“I think we may be bringing up a whole generation of wusses,” he said. I think I agree.

But then I just couldn’t help myself. As Eddie sat there, I grabbed my right breast. “Would you like some milk with your cereal, honey?” I asked. He ran out of the house. He’ll be moving soon, I’m sure.