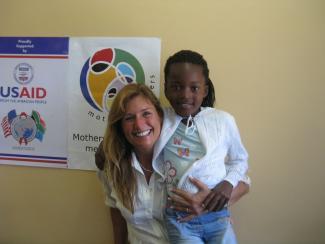 From Hollywood to Cape Town: A Life Changer!

I was 48, and had a successful career as a television producer/director, an 18-year marriage that friends envied, and two beautiful teenage daughters. My stepfather always said, “Man plans, God laughs.”  He must have gotten a belly full. Over the next three years, my stepfather died, I was diagnosed with breast cancer, and, shortly after I completed radiation, my mother died unexpectedly. Then I got the call about my best friend. Karen had had surgery that morning and hadn’t come out of anesthesia. My stomach dropped to my knees.For two weeks, her older brother, Mitch and I took turns sitting by her bed. He told me stories of the HIV-positive mothers he treated every day in Cape Town. He shared his dream, a program he called mothers2mothers, that would educate, counsel and support these mothers in an effort to prevent the transmission of the deadly virus to their unborn babies.After Karen died, my strength deserted me completely. I took anti-depressants, made it to work every day, and wondered how I would survive. One day, I got an invitation from Mitch: Come to Cape Town and see what I’m doing.

I went.  And fell madly, irrevocably in love with the women I met…women who had so few things but so much spirit and courage.  Pregnant, newly diagnosed with HIV, terrified to disclose their status to anyone, and without access to life-saving information, these mothers-to-be had no one to turn to.  I saw that mothers2mothers could address the gaps in a broken healthcare system that had no resources to support and counsel new mothers and their unborn babies.  And I was energized and infuriated by the knowledge that no baby needed to be born HIV-positive.  We had virtually eradicated pediatric AIDS in the developed world yet there were still over 1,000 babies being born every day unnecessarily facing this devastating virus in sub-Saharan Africa.  I knew I had to take the reins of this fledgling grassroots organization.

The idea behind m2m provided such a simple solution to a complex problem by preventing mother-to-child transmission of HIV through an effective, sustainable model of care.  Mothers living with HIV are employed to mentor HIV-positive pregnant women and new mothers in health facilities.  They work side-by-side with doctors and nurses, as paid members of the health care team, supporting and educating women about how to take care of themselves and their babies.

The mothers employed by mothers2mothers come from the communities in which they work.  They help provide a solution to the lack of health care providers in Africa.  They help combat stigma and empower and guide other women, making them aware of treatments and services that are available, saving lives.

Mitch and I began with a skeleton volunteer staff — no budget or assets. It is now eight years later. We’ve grown mothers2mothers into a multinational nonprofit with nearly 600 sites in seven sub-Saharan African countries.  We employ more than 1,400 HIV-positive mothers. We have been honored at the White House, briefed the House and Senate, and won the prestigious Skoll Entrepreneurial Award, the Global Health Council’s Best Practices Award, and the Henry Kravis Prize.  Most important, we have seen thousands and thousands of healthy babies and empowered, respected mothers.

But now comes the real challenge. mothers2mothers is an intrinsic part of the UNAIDs Global Plan to eliminate pediatric AIDS by 2015 and keep mothers alive.  This means we have the opportunity to develop the capacity of African governments and local implementing partners to create their own Mentor Mothers model.  It is so exciting and I can’t imagine anything more important that being part of this generation seeing the end of babies born with AIDS.

It’s a three year call to action and we need everyone to get involved. If every mom gave just $5 in gratitude for her own healthy child, she could make a huge impact. Only $25 could help put one mother through the whole program. Host a baby shower to raise awareness and funds.  There are so many ways to help and I encourage everyone to go to www.m2m.org to learn about ways they can make a difference.

People sometimes ask if I miss the glamour of television … what do you think?

From Hollywood to Cape Town: A Life Changer! was last modified: March 20th, 2012 by Robin Smalley