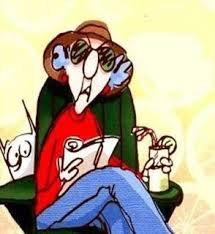 Forgetful? It May Be Multitasking, Not Dementia

I can relate. How about you?

Seriously—how many times have you walked into a room only to mutter, “Now why did I come in here?”

You think of something you want to look up, then forget what it is by the time you get to the computer (a condition I’ve seen referred to as “Googleheimer’s”).

If someone interrupts you while you’re talking, your train of thought derails and you can’t remember what you were talking about when you resume speaking.

You’re introduced to someone and three minutes later can’t remember the person’s name.

You can’t remember where you parked the car.

You set down your glasses or car keys and then tear the house apart trying to find them an hour later.

My keys and glasses
taunt me, hiding in plain sight.
Did I put them there?

When these things happen at our age, the first thought many of us have is “Am I losing my mind?”

With the increasing incidence of Alzheimer’s disease (AD)—now the fastest-growing disease in the U.S. (how’s that for scary?)—and symptoms in most people appearing after age 65, it’s a legitimate reaction. But there’s usually a less-ominous reason for our forgetfulness.

I recently interviewed a neurologist for an article on Alzheimer’s that I was creating in my “other” life as a medical writer. He works with patients who have AD and dementia—or who think they do.

He says that he sometimes sees patients—some as young as their forties and fifties— who are having trouble with their short-term memory. He talks to them about what’s going on in their lives and, most of the time, his diagnosis is what he calls “multitasking amnesia.”

As the term implies, these patients are simply doing too many things at one time. Writing an email while talking on the phone. Scheduling an appointment while driving and listening to the radio. Eating while watching TV and flipping through a magazine.

Ask any neuroscientist and he/she will tell you that we humans can’t, for the most part, focus on more than one thing at a time—and we’re deluding ourselves if we think we can. What we can do is quickly shift our focus from one thing to another (well, some folks, like short-order cooks, can). This ability peaks around the time we’re in college.

But most of us mere mortals really can’t multitask. Why? For one thing, similar tasks compete to use the same part of the brain. So just like two butts can’t claim the same seat when the music stops in Musical Chairs, our brains can’t focus on two things simultaneously (like talking on the phone while following a recipe to make dinner). Try it, and chances are you either won’t remember pieces of your conversation, or your meal will taste like crap. And you wind up going to see the doctor because you think you’re getting dementia.

I’ve experienced this multitasking amnesia lately. Since starting this blog, I’m on the computer a lot more outside of work, scheduling posts, replying to comments, checking Facebook, etc. While my husband knows not to talk to me when I’m working in my office, I often do blog stuff in the neutral territory of the kitchen. So he talks.

And twice in one recent week, he later referred to something he’d told me—and I had absolutely no recollection of it. Because I simply can’t compose a sentence and process what he’s saying at the same time (giving credence—on these two occasions anyway—to his complaints that I don’t listen to him).

I also find myself turning down the car radio when I’m trying to find a destination I’m not familiar with (the music interferes with my ability to concentrate on driving directions). And I’ve never been able to listen to music while writing.

So what’s a body with a brain to do? I try these tactics (at least when I remember to):

Our propensity for multitasking amnesia underscores why it’s important to be mindful, to focus our awareness on what we’re doing in the here and now—one thing at a time. To be present (especially at this time of year when things can be especially chaotic).

What do you think? Any experiences – or memory tricks – you care to share?

Forgetful? It May Be Multitasking, Not Dementia was last modified: January 5th, 2016 by Roxanne Jones