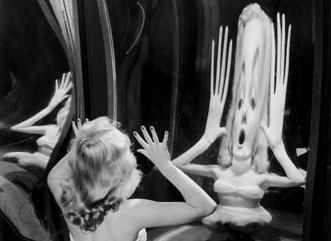 Don’t try this if you remember watching Howdy Doody in elementary school. Unless you’re very brave. Lay a magnifying mirror on the table. Look down. If what’s hanging between your lips and your neck doesn’t cause some innate gene to unconsciously move your hands under your ears to pull the skin upwards from your chin, then you and I are wired very differently.

Up till a decade or so ago I still believed that cosmetic surgery was a slightly shameful activity practiced on self-absorbed, conceited women by doctors paid to slice into human bodies in the name of beauty. Laughter never reached the eyes of the first women I knew who had “work” done, and the furrow of sympathy, a part of all my friend’s faces, was missing from their foreheads. It took a while to realize that that younger version of me wasn’t seeing the whole picture. As I “matured,” I understood the female obsession with appearance isn’t sick… it’s a perennial human concern. From the moment we pierce our ears and put on nail polish, we are always changing our appearance.

When I get together with my friends we love gossiping about who’s done what. A few have had their eye lids lifted, a couple had collagen injections and chemical peels and the one who had liposuction had the fat that was suctioned out, condensed, purified and injected into her cheeks. None of them were ever unattractive. The fact is, sans sags and bags, they simply look great for their age. Each is beyond satisfied with the body part she had surgery on, and, not that life is ever hunky dory, (the fact I used that expression makes me a candidate for each of the above procedures) but each displays a definite  boost to her self esteem.

As more people choose to defy the ravages of time with surgical alterations, who wants you to notice and who doesn’t, can be a rough call. “Your skin looks beautiful” is always safe. And “Have you lost weight?” is just about code for, “Who did your eyes?”   I would never comment on a man’s absence of crow’s feet or suddenly vanished spare tire, somehow feeling they’re even more sensitive to the stigma of looking older. I figure the only time it’s safe to ask, “Have you had something done?” is when you know for sure he hasn’t.

So here’s the question… if I decide to change how I look, am I hiding who I am… or am I altering my face to fit how I feel inside? Will  the result be a real-er me or a faker me? Will I be revealing… or concealing… my true self? On those days when I walk down the street and I feel invisible, if I have cosmetic surgery, will I reappear? The truth is now that biology is no longer destiny, I don’t feel like looking forward to a future where I look like the past. Maybe if I could take my face back to the first Bush administration, (not that I was ever thrilled looking in the mirror then), my spirits will soar. Then again, visions of Latoya Jackson and Kenny Rogers fill my head. Mmmmmm. I’ll keep you posted.