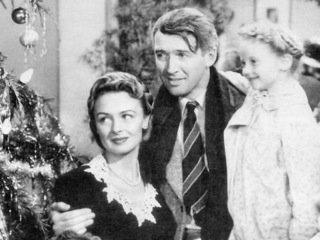 “We’ll get a lot of things wrong. Maybe terribly wrong. But there’s a lot we’ll get right. And all those right things, small as they may be, add up. Just like charges on your credit card.”

This is the time, if you live in North America, where normally scheduled TV shows are preempted by Christmas specials. Whether it’s Charlie Brown or Kris Kringle, the Grinch or Charles Dickens telling the tale, the message is pretty much the same. Giving makes living worthwhile.

It has taken me 51 years to see Frank Capra’s 1946 classic, It’s a Wonderful Life. I came home last night after taking a long walk in the park and enjoying an early dinner with a friend. Though not usually my habit, I turned on the television. Recognizing Jimmy Stewart’s face, contorted with the pre-suicidal anguish of his character, the now-immortal George Bailey, I decided to bunker down for the rest of the film.

George Bailey, small-town hero, nice guy, father and husband, friend, and brother, son and cousin, is on the outs. Despite his most heroic efforts, he has lost his financial security. Threatened with debt he cannot see past, crushed by the precariousness of his plight–repossession and possible arrest — he heads for the local bar. It’s not redemption he finds in his whisky, though. It’s his inner enemy, the shitty roommate, throwing rotten apples at him and bringing up his every fault, his every shortcoming with relentless venom.

Like George, financial straits have been pushing a lot of people against a wall, up a bridge into desperate action, or under a blanket into the arms of depression or escapism. Whether its individuals, families, communities, or whole countries, the challenge of trying financial situations and bleak futures have put an end to the security and comfort so many people in the Western world used to take for granted. I am one of them.

Our family decided to make a major life change in one of the most challenging economic times since the Great Depression. Like George, who lost hearing in one ear to save his brother, or decided not to have a racier, more exciting life in order to protect his customers at the Savings and Loan, our family chose to make certain sacrifices for our daughter’s education. Our sacrifices are common – there are many parents out there making difficult decisions right now for the sake of their kids – and we know we are not alone. Still: The choices we had to make — it’s a long story but my husband and I now live apart so my daughter can attend a specific middle school as the options where we live are extremely limited—have lead to some trying times.

And, as life would have it, the tears don’t end there.

Recently, one of my friends tried committing suicide. Painful news, unexpected, blindsided her. It knocked her off center just when she felt she had finally crawled out of a sink hole. Just when things were beginning to look up.

I never asked her what method she chose, I only know that before the Fat Lady sang, my friend “came to” and did something awfully brave.

She changed her mind.

It didn’t make the bad stuff go away, but edging that close to death, it did allow her to stake her flag in the very gut of life and find the place inside of herself that wants, yearns, demands to live. It gave her perspective, a different point of view.

Maybe, like George, an angel appeared and coaxed her out of her exit strategy. I don’t know. Convinced that his life was a string of failures, George wished that he had never lived. George’s angel showed him how life would have been different if that had been the case.

And that’s the power – and the message – of the film.

Each one of us matters.

The world would simply not be the same without you, without me.

We’ll get a lot of things wrong. Maybe terribly wrong. But, if you’re like most people, there’s a lot you get right. And all those right things, small as they may be, add up.

All the small things, the baby steps, the attempts, they all add up. Just like charges on your credit card.

So, this holiday season, be an angel.

If anyone around you is losing courage, losing faith, losing hope or anything else that makes life worth living, give them a hug. Say something nice. Take the first step.