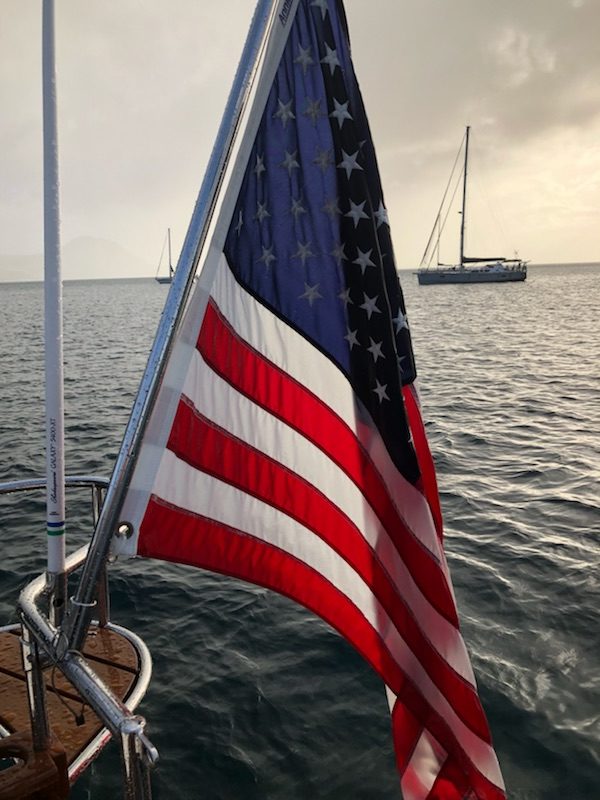 Embarrassed For Our Country 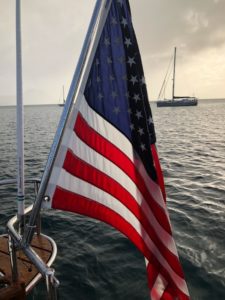 As we pulled out of Prince Rupert Bay in Dominica just after dawn the other day, our American flag was heavy with rain from a night of squalls (yup, I forgot to take the flag in after sunset- it might have been the rum). The flag hung, lifeless, sopping wet, dripping a few drops of rainwater onto the transom.  Even at that hour, before my first full cup of coffee, I felt our sagging flag was a metaphor. My flag was drooping and crying, and I was too– for I am so embarrassed by the President of our country.

Dominica is an island of unparalleled beauty (think rain forest beautiful) that was devastated by hurricane Maria this past September. As nature begins to fill in the rain forest with bursts of green, from the bay one can hear hammering all day, as the locals rebuild their shops and homes. It is an island of great pride, hardworking, industrious, intelligent people filled with optimism and good humor, even as their lives have been turned upside down by a strike of nature.

Many of the villages still do not have electricity restored. There is not much by way of groceries in the stores. Most of their crops- pineapple, bananas, lemons, oranges- were destroyed. Some of their people are desperate, trying to persuade sympathetic visitors into handouts (which we were happy to do)- a couple of dollars here or there, a gallon of gasoline. There are piles of aluminum by the road from roofs that blew off. There are broken down buildings, and there is garbage, oh so much garbage.

And it is here, in the harbor of an island that is hurting so badly and where they are working (successfully) so hard to turn things around, that I heard about our President making the comment about immigrants from Africa and Haiti being from “shithole” countries. I was, in a word, mortified. What would our President say about the beautiful island of Dominica? More importantly, what do these islanders think our American President would say about their country? And what could they possibly think of Americans, who allowed this crass, bombastic, entitled child to become our leader? What do the people on the other boats, who proudly fly their German, Canadian, Swiss, British and French flags, think of the boat flying the stars and stripes?

For the first time in my life, I am embarrassed by our government. For the first time in my life, I introduce myself to non-Americans (the hairdresser at the salon, the taxi driver, the tour guide, the shop keepers, and a hundred other boat owners) with a caveat: I’m American, but I did not vote for Trump; I do not approve of Trump; I am embarrassed by Trump. And then I remind them that he did not win the popular vote, which they all know, but don’t understand. Amazingly, none of them have ever met an American that did vote for him.

It is the crassness, the stupidity, the dishonesty, the vulgarity, the pomposity that Trump embodies, more than his conservative policies, that so embarrasses me. Brett Stephens, the conservative columnist, said it best in his New York Times article, Why I’m Still a Never Trumper on December 26, 2017. “Character does count and virtue does matter,” he stated in his article. Trump’s “lying, narcissism, bullying, bigotry, crassness, name calling, ignorance, paranoia, incompetence and pettiness” all matters. Indeed, it certainly does to this American visiting many foreign lands with an American flag stuck to the stern of her boat.

So what do I do? Should I “forget” to put out the American flag in the morning (it’s kind of a thing to fly your flag of origin off the stern.) Should I don a hat with a maple leaf when I go ashore, eh? Should I casually mention my breakfast of bangers and mash?

For now, the flag is still flying off the stern of the boat. I continue to issue caveats to those I meet: I did not vote for him, I do not approve of him, I am embarrassed by him. And I hope that I, and other Americans, can help mitigate the damage inflicted by our President by treating one another with kindness, humility, and respect.

Embarrassed For Our Country was last modified: January 15th, 2018 by Ronna Benjamin