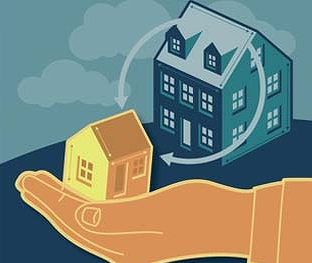 The downsizing of one’s home is usually associated with retirees and empty nesters looking for smaller spaces when approaching a new phase of their lives. While not always altogether a positive experience, in those instances it is often a matter of choice. When downsizing comes on the heels of a divorce, however, it is hardly ever a matter of choice, but more often precipitated by financial issues.

It is a very rare occurrence that a move as a result of divorce is a move up, to a bigger space. I recently spoke to a number of women about the subject: all have moved on and have, at least initially, downsized. While the reasons that facilitated the divorces varied, finances (or the lack thereof) always played a large part in this downsizing. Many of the women already had jobs and careers, and some had to obtain them, but regardless, their lifestyles changed post-divorce, and their net worth decreased dramatically.

Those who lived in large homes moved to smaller ones, and those in small homes moved to apartments, condos or even mobile homes.  In addition to keeping within their budgetary limitations, the criteria that was used when these women looked for new places to live had a lot to do with whether or not children were part of the equation. Moving the kids to a new home was one thing, but moving them to a new neighborhood and forcing them to adapt to a totally new lifestyle after the breakup of their family was not what the majority sought to do. Those who had children made them and their adjustment a priority.

Joan Roover, of A Thoughtful Move, a move management service, has had lots of experience with post-divorce relocations. She notes:

Children’s memorabilia can be a very touchy thing, and parents should keep that in mind. Having a space they can call their own, away from the reality of their broken home is key for youngsters and teens.

Recreating their old rooms (with their bedding, toys and stuffed animals) in their new surroundings is sometimes beneficial, but there are also children who would rather start anew, just like their moms. Having them be part of the redecorating process also helps them develop good feelings about their new home.

When you’re forced to become more cognizant of your bank account, less space translates into lower rent or mortgage, lower utilities, and less costs in upkeep, and that makes sense from a financial standpoint.

Less space also means less stuff, and as George Carlin once said, “A house is just a pile of stuff with a cover on it.” If you can keep that in mind while going through your “stuff,” it will help facilitate things.

Take a few representative pieces of your life that will provide you with some comfort. Space permitting, bring only the things you absolutely love. And let your new lifestyle drive your choices.

Emotions and feelings are very raw at this point, so Roover suggests leaving them at the door. “Put aside any acrimony that might exist,” and devote the energy you might expend in being angry to moving out and up. (Acrimony could also cloud your decision-making process when it comes to deciding what and what not to take.)

The extra “baggage” associated with a downsizing related to divorce can be debilitating and demoralizing. For some of the women in my discussions, downsizing served as a sign of failure, but for others the trauma of moving was overshadowed by the excitement in knowing that a new life was in the offing. It was looked at as a chance to get out from under a miserable situation and start fresh.

How can a “feel-good space” be created amidst all the chaos going on?  One woman had a dream about the color yellow. “Yellow” meant sunny and bright to her–the opposite of what her life had recently been. Coincidentally, the first place she toured happened to be yellow–she bought it, and hasn’t looked back since (and it’s been ten years).

A chair shaped like a red high-heeled shoe and a purple living room wall exemplified liberation to another woman. These were “girly” things that her ex-husband would never have put up with in the home they shared. In her new surroundings they served as heralds, announcing her new life to whoever came through.

Someone in the group summed it up perfectly: ”It’s not the end of the world if you have to move. You will create new memories in your new place, and that’s what will make it your dream home.” As difficult as the situation may be, a positive outlook will always help, and many of the women I spoke with adopted one. They felt that a move, albeit to a smaller place, was a move in the right direction–a move to a new life, and a better future.