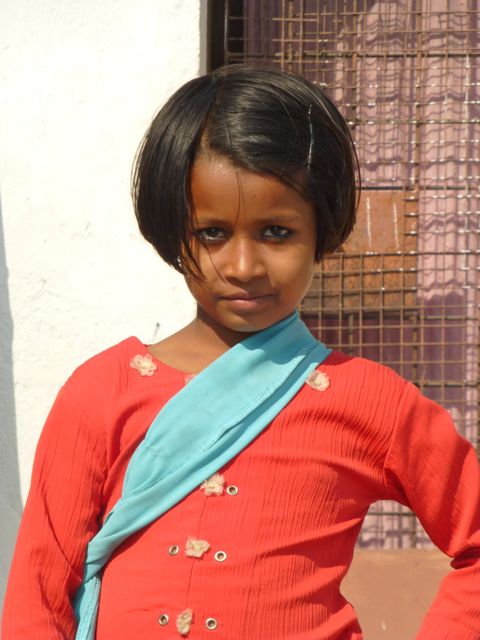 The Children Of Raped Mothers

Come along with me…

Sangita Dey was driven from her village home by profound poverty.    Actually, that’s not strictly accurate. Profound poverty didn’t drive her from her home.  It drove her to believe a man who came to her village, promising he would take care of her and her children if she followed him to Calcutta.  Being beaten and sexually molested by your husband’s family will leave you vulnerable to such talk.   With her two baby daughters, Sangita followed him.  And indeed he took them to Calcutta.  To a red light district.

Why not flee to her own family?  Because her mother, a sex worker, had already died of AIDS.  She never knew her father, only his name.

Sangita went into a line of women working the street.  She made nearly $6 that first night, more than she’d ever had in her life. Nearby she rented a room, where she lived with her two little girls.  Every evening when she brought clients there she would put the two girls outside and tell the older one “Hold on to your sister and don’t let anyone take her.”  Each time she emerged from her room she would find Juma crouched nearby, her arms wrapped tightly around the baby, hugging her to her chest.

Turning three to four tricks per night at three dollars each, and paying only a few cents for rent, Sangita and her girls were no longer hungry.   They went along like this for several years.  But Juma was growing up wild.  By age five she was unmanageable, and her sister Jasmine was following her lead. Sangita feared for them.  And also, perhaps, felt burdened by them.  When a friend introduced her to the founder of New Light, an NGO pursuing gender equality in India and providing full shelter for sex workers’ children, Sangita asked them to take her two girls.

That was nearly seven years ago.   Things have turned out well for Sangita, who sat with me for an hour sharing her story.  And of course I know her girls.  I live in the same house as Juma, who’s now a bright, but naughty 11 year-old, going to school and staging dance competitions with her friends at Soma Home, the group home run by New Light.  And Jasmine likes to play Angry Birds on my iPad, when I’m at the New Light crèche and shelter where she lives full time, in a different neighborhood from her sister.  As for Sangita, she’s married and working as an office lackey.  She visits her daughters often. But she has not taken them home.

For these few weeks that I’m in Calcutta, I’m in the midst of such stories.  I’m living with the 33 girls who are sheltered and supported at Soma Home, New Light’s house for girls ranging from 9-18.  Nearly all are daughters of sex workers; some have mothers who have already died, perhaps from AIDS, perhaps alcohol.  Some have mothers who saw men eyeing their daughter when she was only seven and feared for her safety.  Some are daughters of women who have left the sex trade, thanks to micro-credit from New Light, and the desire not to shame a daughter who was now so well educated.  Some have mothers who do not want to care for daughters, but who dote on the sons they keep at home.

We eat together, make up word games with Bananagrams, share stories. Sometimes I help with lessons. On weekends, I’m allowed to take the young girls to a park to play. With the older girls I go to a Bollywood movie, for an evening of quite wild entertainment fortified by chips and Pepsi.  Tomorrow some girls will teach me to cook a favored Bengali chicken recipe, and I will teach them how to make ratatouille.  Eggplant, zucchini, tomatoes and onions are plentiful right now.  As one of them said when she asked me the name of the dish we would cook:  “Oh, if I tried to say that my teeth would fall out!”  Surrounded by exceptional grace, I feel too clumsy to broach the idea of learning a Kathak dance.  Then again, I do have good teachers sleeping right above me, so perhaps osmosis will work.

During the day I also go to the New Light crèche, which shelters the younger children of sex workers, 35 or so who live there permanently and another 100 who come for a snack, a rest and clean, quiet place to play with friends or get help with their studies.  It’s there that I interview the moms, though I also go to their homes if they live nearby.

The children’s shelter is in Kalighat, which is an old neighborhood, full of narrow lanes and crumbling buildings, loud with hawkers, blaring music and honking horns.  To have credibility with the women it seeks to serve, the shelter is right in the midst of the red light area.

Several sex workers at a time stand or squat at the entrance to the narrow, fetid alleyway where the shelter is housed in the ruins of an abandoned temple. To get there, I walk down the damp pavement, by women sitting on curbstones, past windowless rooms the width of one narrow bed, around mangy dogs nosing garbage, sidestepping a man bucket-bathing against the wall.  A fat woman pushes one enormous breast back under her sari.  A few people cluster together, talking loudly. I hurry my step, not sure if this is standard Bengali talk or a prelude to a fight.

As I walk I try not to breathe the cool reek that wafts from a dark courtyard, as it clashes with the warm stench flowing off the canal at the alley’s far end. Through a communal 8×8 courtyard, up a narrow, tiled stairway and I’m on the roof terrace which houses the New Light crèche and offices.   For the children of Kalighat, it’s a haven of laughter and lessons, of regular meals, naptimes, friendship and hugs. Without fail I am greeted by one child or another who either races to me and hugs my waist hard, or clambers into my lap begging for another chance to type on my iPad keyboard.

But before that, I always stop at the top of the stairs to greet a wizened slip of a woman with a deformed hand.  She lives in the 6×8 room at the top of the stairs, with her ancient mother and her alcoholic husband. Yesterday I saw her right eye was bloodied red.  When I arrive she wraps her arms around her mother and points her chin in disgust at her husband.  He’s asleep crossed-legged, leaning against the wall, one arm flung out toward a filthy plastic water bottle filled with an amber liquid.  We squat together for a few minutes and she stares deep into my eyes, her toothless mouth working in outrage and pain. She brings her twisted hand to her cheek and winces.

By contrast, Soma Home is in a nice, lower middle class neighborhood. It’s quiet here, residential.  There are towering mangos, palms and shrubs.  The streets are wide and deserted. It’s quiet enough in the early morning that I can here pigeons cooing. A heavy padlock secures the entrance gate, mainly to keep unwanted visitors out, though also to ensure the girls stay in.

If you knew nothing about the girls’ history, their intelligence, exuberance and talent would persuade you that you’d stepped into a girl’s camp.  A somewhat crowded, noisy camp, with threadbare sheets on the bed, girls sharing clothes and shoes, not having any personal belongings to speak of, and never receiving letters from family, but otherwise just the same.  There’s the teenage group that trains 3x/wk with Razia, national women’s coach, judge and boxing referee.  There are the middle girls, into crafts and making cards and bracelets for each other.  There are the younger girls, who stage their own version of “Dancing with the Stars.” School is de rigueur, meals are nutritious, discipline is clear.   Everyone takes a turn helping the cook prepare.  TV is allowed only on weekend evenings.

The girls at Soma Home are a joy to be with.  The pure happiness in their eyes when a mother comes to visit (each mom is allowed to come once a month) is a sight to behold.  The mothers are so proud of their daughters.  And the daughters clearly are devoted to their moms. Every one has a story that would break your heart, and by rights should have broken theirs. But they’re strong!  They’re optimistic!  They have dreams!  They love movie stars!!  And nail polish!!  Today we went to a great shopping mall, to buy the ingredients for that ratatouille.  In the food court I spied a Subway serving chicken tikka and chicken achari subs, 6” and 12” versions, of course.  And KFC offered a bucket of chicken curry drumsticks that I bet would be an instant hit in the U.S. Have I conveyed at all that this is a special place?

Note: The story of Sangita is a composite.  Though I made up a name for her, the story itself is neither better nor worse than any history I’ve been told.

Find more about Dina at www.dinabennet.net

The Children Of Raped Mothers was last modified: January 29th, 2013 by Dina Bennett