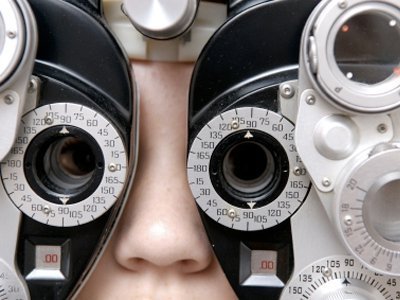 I’m much too young for cataracts.  Wasn’t this supposed to happen in my 70s or 80s? Here I was, at the hospital thinking how one of my grandchildren should have been the ones escorting me to the operation—yet I was with my daughter, who wasn’t even in college yet much less blessing me with a grandchild.  She watched me fill out pre-surgery forms, giggling when I reached the question: Please check here if you have prostate problems.

“Are they going to give you Larry David’s father’s glasses?” she asked, referring to the character on Curb Your Enthusiasm whose over exaggerated, oversized glasses she associated with…well, grandparents. Lucky me is in the elite 5% of people under sixty who have cataracts.  I’d been in cataract denial for two years, continuously ignoring the blurriness in one eye that I could live with—if I didn’t want to drive or enjoy peripheral conversations with friends.  I’d even rationalized, when I hit a bad tennis shot, that it was because of that “difficulty” in my left eye.

I could no longer delay the inevitable.  It was time to clear my vision.

For most of my life I enjoyed 20/20 vision.  I didn’t wear glasses until my late 40s when I succumbed to my first pair of reading glasses.  How I’d made fun of my mother when I was a teenager, watching her squint while stretching a menu out as far as her arms could reach.  “My eyes aren’t bad,” she’d say, “It’s just that my arms aren’t long enough.”  Now my arms were too short.  A genetic inheritance?

I still associated cataracts and other eye problems, with old age.  How many times, after all, had I taken my aging mother to the eye doctor, or helped her search for lost glasses, even watched her eyesight deteriorate in her 90s.  (Now my teenage daughter helps me find my perennially missing glasses—but that’s another story.)  And I’ll never forget the time I visited my professional mentor in the hospital after he’d had a stroke in his late 70s.  Another one of his former students, a geriatric physician, removed his glasses from the bridge of his nose and cleaned the smudged lenses with the bottom of her shirt.  Replacing them, she said, “Now you can see!”  It was one of the most tender physician moments I’d ever seen at a patient’s bedside.

Procrastinating no more, I finally consented to having the vision restored in my own lens by a renowned, hyper-busy ophthalmologist who wore thick glasses.  He did four cataract surgeries an hour, sometimes 15 a day; how complicated could this be?  When his nurse enthusiastically wanted to show me a video of how the operation worked, I refused—the mere thought of lasers interacting with my eyeballs made me queasy.

“Just give me the maximum dose,” I told the anesthesiologist on the day of the surgery.  I was the youngest one in the waiting room, one of the only ones without a cane, I might add.

As Valium pumped through my veins, I thought I was watching ER reruns. I heard the entire operation.   “More saline please,” said my doctor, while my inner mantra was: Just get this over with already.

Two and a half hours after having my blood pressure taken, I walked home from the hospital with my husband.  We even stopped at a favorite bakery for a muffin.  Eye patch or not, I didn’t want to miss another meal.

There are milestones everyone reaches: Driving age, voting age, drinking age, marriage, birth of children, cataracts.  I am now on the other side—even though every time I see the ophthalmologist, he keeps saying, “When are we going to do the other one?”

The day after the surgery, I showed my daughter the gift from the ophthalmologist: Gargantuan black sunglasses.  “Are you going to wear them?” she asked.

“How many fingers am I holding up?” she asked.

“Two,” I said.  Twenty-four hours post-surgery and the blurriness that had hampered my vision was gone.  Miraculous!

“One,” my daughter quickly backfired.

Gasping, I realized she was only joking.  She was wearing the tacky glasses and doing a silly, impromptu dance around our living room.  I extended my arm, looked her straight in the eye, and together, we engaged in a duet.  My vision was much improved, but I still danced like Liz Lemon on 30 Rock. Who cared? I could see.