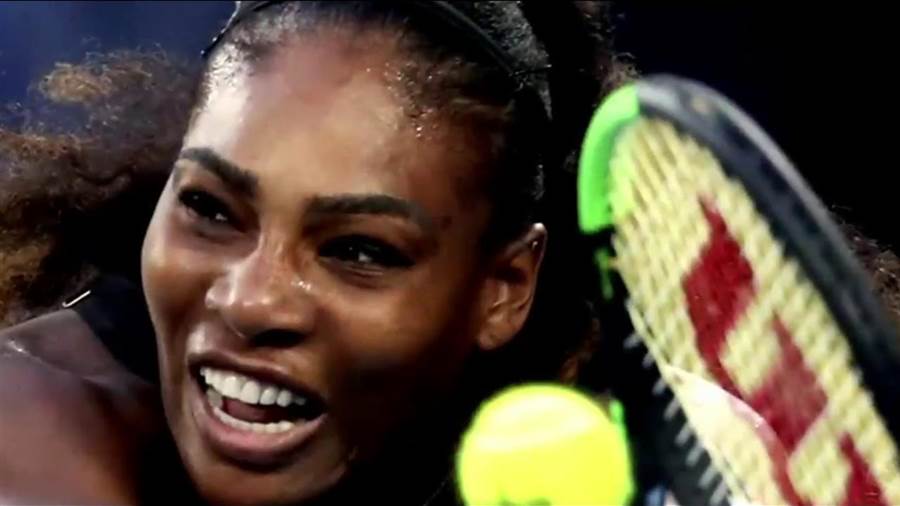 Can We Talk About Women’s Eyebrows?

I’m watching tennis great Serena Williams pound the ball at her Australian Open quarterfinal opponent. But instead of gaining tips on her formidable groundstrokes, I find myself mesmerized by her dark, wide swaths of eyebrows. Are those dramatic, boldly blackened brows natural or penciled in? I never noticed her eyebrows before but now they seem to have taken on a life of their own, lifting and lowering as she celebrates or bemoans each point.

Just the other day my tennis partner mentioned an upcoming appointment with her “Brow Lady.” I don’t have a brow lady and now I’m wondering: Is there something going on with women’s eyebrows that I’ve been missing? Sure, I pluck the errant hair that grows off the path but Serena’s perfectly groomed, bold brows appear to be distinctive works of art.

I Google “Serena Williams eyebrows” and find I’m not the only one interested. There are hundreds of photos of her brows and thousands of comments about them on social media. “They look like caterpillars ready to crawl off her forehead,” one unabashed Twitter critic wrote in July 2015, ignoring the fact that she’d just won the women’s Wimbledon singles title for the sixth time and her thirty-sixth Grand Slam title.

Thick or thin, bushy or barely there, Serena’s eyebrows are fodder for Twitter trolls. So affected by their scathing post-Wimbledon comments, she posted a selfie on her Instagram account several days later that said: “Lol, finally getting them shaped! Hahaha #haters I love you!!!” adjacent to a photo of her eyebrows being shaped by her stylist. The post received over 45,000 likes – a lot of attention for two measly strips of facial hair.

All this furor is convincing me that eyebrows may be worth a few more minutes of my time. I think back to the 1970s and actress Ali MacGraw’s oft-debated bushy brunette brows. By the 1980s, Brooke Shields and Madonna were garnering both praise and condemnation for their own abundant thatches. In the 1990s, actress Drew Barrymore’s over-plucked arches ushered in the era of the “anti-brow.” Other actresses throughout history made brow statements as well: Clara Bow, Jean Harlow and Greta Garbo for their severely tweezed and penciled brows during the 1920s and ‘30s; Elizabeth Taylor, Marilyn Monroe and Audrey Hepburn for strong brows with high arches twenty years later. And how can anyone forget the early twentieth century Mexican portrait artist Frida Kahlo’s dark, ungroomed unibrow, a nonconformist statement if ever there was one.

Like other decades, I’m certain that the one we’re living in has its poster children for statement brows as well. In fact, I seem to remember pop singer Miley Cyrus sporting blue, platinum and rhinestone-adorned eyebrows over the past few years. But another Google search, this time for “best eyebrows” repeatedly yields two names: Cara Delevingne and Lily Collins.

Delevingne, a British fashion model-turned-actress, has written her ticket to success largely on the basis of her bushy, luxuriant brows. And Collins, a British-American actress and model, is so renowned for her naturally thick eyebrows that they have their own Twitter account (although she denies creating it). My favorite tweet: “I got 99 problems but my eyebrows ain’t one of them.” Collins reports that her brows are the object of such envy that fans often ask to touch them.

More Googling and I learn that women’s eyebrows have been a critical component of beauty since the ancient Egyptians began painting on carbon and black oxide substances to darken and elongate their brows (think Cleopatra). But, in a quirky ritual, eyebrows were sacrificed when ancient Egyptian cats met their demise. Considered sacred creatures, the family that owned the deceased pet would shave off their own eyebrows to reflect their sorrow and respect. By the Middle Ages, women began sporting heavily plucked brows with that trend continuing well into the mid-twentieth century.

I learn that if your natural brows are too sparse, you can choose from eyebrow extensions, tiny hair fibers that match your complexion and are glued to either your existing brows or to the skin; microblading, a tattoo technique that fills out your brows or reshapes them by drawing on lines that resemble individual hairs; or eyebrow transplants, a surgical procedure that relocates follicles from your scalp to your brows. With options ranging from fifty dollars to eight thousand dollars and results lasting from a week to a lifetime, only you can decide how much beautiful brows are worth.

My own makeup case is absent of eyebrow products, save for the tweezers. But more Internet searching yields a trove of possibilities: gels, pencils, powders, waxes, and brushes. I can see that all this eyebrow grooming is too complex and time-consuming for a low-maintenance girl like me. But what if my brows look like caterpillars too? I text my tennis partner for The Brow Lady’s phone number and set up an appointment. Apparently, there’s no time to waste.

I’m ushered into a small office suite that looks neat and sterile. White cabinets line the walls and rows of instruments and myriad beauty products are displayed on the granite countertops. The Brow Lady introduces herself and explains that – surprise! – my eyebrows need shaping and that she’ll wax and pluck them into submission. Age and outdoor sports have, she explains, lightened their color, so she’ll be “tinting” them as well.

“Does that mean you’ll be dying them darker?” I ask, eager to understand browspeak.

“Yes,” she replies, her voice confident. “They’ll look kind of dramatic for a few days and then they’ll fade to just the right tone.”

I lie back on her comfortably padded table and she goes to work. Once she completes the waxing, tearing off my excess hair with hot wax and a soft cloth, she gets more precise, wielding the tweezers for final shaping. She applies the tint, specially formulated, she assures me, for eyebrows, and we wait several minutes to let it process. I sit up, she hands me a mirror and we survey the finished product.

“Wow!” I say, truly surprised at the sight of my newly tamed brows. They are, indeed darker, more evenly matched and shaped somewhat like Serena’s or Cara’s or Lily’s. Gone are the pointy upper peaks and fine hairs that were creeping toward my temples.

“This is just a start,” The Brow Lady explains. “I didn’t want to do too much the first time.”

I now realize that we’ll become fast friends, what with our monthly tweezing and waxing get-togethers. The Brow Lady just became My Brow Lady and I key her number into my contacts, adding her to my iPhone “Favorites” list. I take a final look in the mirror and pantomime facial expressions to be sure my eyebrows work as well as they did prior to her ministrations. They still lift in surprise and knot in displeasure. And she’s assured me that they’ll still prevent sweat and other debris from falling into my eyes, just as scientists surmise they’re designed to do.

“See you in a month!” My Brow Lady says cheerily as I head out into the world, my new eyebrows giving me the confidence I never knew I was lacking.

Can We Talk About Women’s Eyebrows? was last modified: March 2nd, 2017 by Karla Araujo