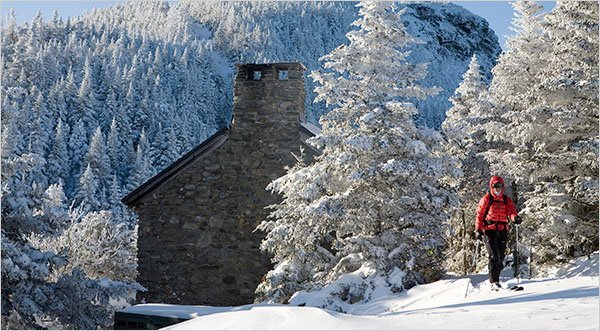 Life IS better after 50.  For me the greatest awareness of that came when I focused on the realization that memories are the stuff of real life and decided to act on that belief. There’s a stone hut at the top of the mountain where my family skies. It’s rented to those ambitious enough to carry in––and out––their food and comfort supplies for the length of their stay. The mountain company supplies wood for the fireplace and there are platforms with vinyl pads for sleeping. When my son told me he had managed to rent the hut for a week, my first thought was, “Who wants to stay there in the middle of the winter?”  “You’ll freeze to death,” I told my husband and son.

Obviously, I was wrong on that assessment as people have been staying in the hut since it was built in 1929, but I was pretty certain I wasn’t going to find that out personally.  However, as I listened to my son, his wife and their boys’ excitement over this planned venture, I decided this was a trip I did not want to miss.

The deal is––you bring all your supplies to the chair lift, put it on the seat, ride up the lift, and get it off as quickly as possible before the chair you’re on turns to make its way down the mountain again. Once you’ve gotten the bags off the chair you need only go another 75 feet up and down hill to deliver them to the hut––all of this on skies.

I lucked out.  I was on the supply side of the food chain so my job was simply to help gather and prepare the food and items we might need.  The “boys” did all the schlepping. By time I arrived, wood had been placed in the fireplace, making the hut toasty warm and the bags delivered.

Riding the chairlift toward my night of camping, I began to wonder if I really wanted to spend the night. The last time I camped my son was ten, and I swore I would NEVER do it again, but things change when grandkids arrive.

The night was special.  With no electricity and an agreement for no technology––other than cameras––we all sat round the picnic table engrossed in real conversation and enjoyed a game of charades. The wind howled around the building, and we laughed knowing we were secure in this well-built stone hut as we watched snow flakes land on the small windows. Delightfully, most of us slept well in this surprisingly warm space.

One of my special memories came in the morning sunrise. Jonathan, our ten year old grandson with a sensitive and creative eye, came running back to the hut after his predawn venture outside.  He shared pictures he had taken and urged me to come see the sunrise.  Not only was the view  glorious, but the warmth of sharing appreciation of this beauty with a special young person shattered any sense of cold one might possibly have on a ten degree morning at the top of a mountain.

Camping out had not been a thought for my bucket list, but I will never again swear that I won’t go camping!