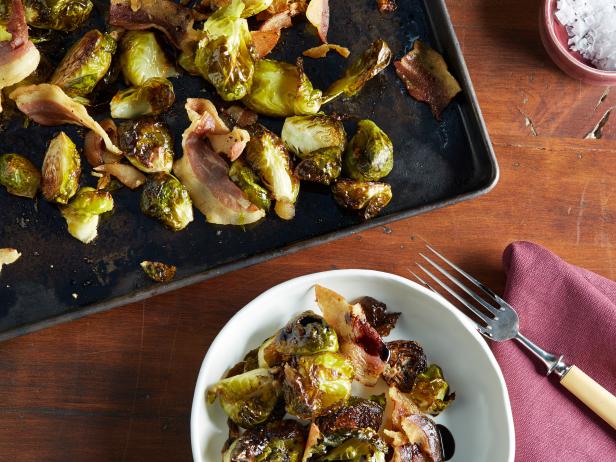 Brussels Sprouts In A Pan

Open a current food magazine or restaurant menu and clearly, Brussels sprouts are enjoying a long spell in the spotlight. I’m not a fan of edible fads, but I love when one of my favorites becomes the food of moment, or in this case, the year. I am firmly planted on Team Brussels Sprout.

Not everyone shares my affection for the round cruciferous vegetable. I’ve read lengthy Facebook debates on the veggies’ pros and cons. Lovers and haters share two things: strong opinions and taste buds.

Since forever, my husband has detested Brussels sprouts. If I made them, aside from not eating them, he would wrinkle his nose at the smell they gave off while roasting. This past year, as the sprout has populated menus, my husband ventured out of his comfort zone. He was at a business dinner when he messaged me, You won’t believe it, I ate a Brussels sprout.

And you lived to text me about it, I wrote back. Did you like it?

His admission surprised both of us.

Still, the dish that had turned my husband’s taste buds was prepared in an interesting sauce by a trained chef. My go-to recipe was a simpler affair; I roasted my sprouts with a little EVOO, a sprinkling of sea salt, and some fresh ground pepper.

It became a kind-of quest of mine to find a Brussels sprout recipe that would please everyone in my immediate family. My kids were fine with my plain sprouts, declared them good, but they too, oohed and aahed over restaurant offerings.
My recipe searches turned up ingredient lists relying heavily on bacon. My daughter is a vegetarian, so those were out.

In early fall, my husband, daughter, and I ate at a vegetarian restaurant and shared a Brussels sprout appetizer. The dish was delicious. We all raved—even my husband!

As I planned our Thanksgiving meal, I decided to recreate the recipe that wowed us. Luckily, the restaurant’s name of the dish gave away the main flavor influencers—miso, maple syrup, and sake. My first recipe attempt was good, but bland. I tweaked the ingredient amounts and my cooking methods.

For the second try, good friends came for dinner and were enlisted as taste-testers. The dish was mostly a winner, but one friend suggested, “You could broil them for a few minutes at the end so they crisp up.”

On Thanksgiving, my third try hit the recipe jackpot. My family loved the new Brussels sprout dish. And how do I know their gushing was genuine and not just polite? Everyone went back for seconds.

If you’re looking for a crowd-pleasing Brussels Sprouts recipe here it is!

Instructions
Preheat oven to 425 F. In a sealable bag, toss the Brussels sprouts with 2 tablespoons of EVOO. In a saucepan, combine ¼ cup EVOO, maple syrup, miso paste, sake, and garlic.

Over low heat, stir frequently and bring the sauce to a low boil. As soon as it’s boiling, remove from heat. Spread the Brussels sprouts out on a rimmed jelly roll pan.

The pan should be big enough to have them in a single layer. Sprinkle with sea salt and black pepper to taste. Bake the sprouts for 10 minutes. Remove the pan from oven and coat the Brussels sprouts in the maple-miso sauce, reserving about 3 tablespoons of sauce for later. Return the well-coated sprouts to the oven for another 15-20 minutes until they start to brown and stirring once midway through cooking. Stir the Brussels sprouts at the end of the cook time and switch the oven to broil. Broil the sprouts for about 5 minutes to crisp up. Keep an eye on them so they don’t burn.

Transfer to a serving bowl, pour on the reserved sauce and stir. Sprinkle with sesame seeds.

Brussels Sprouts In A Pan was last modified: April 15th, 2018 by Sharon Kurtzman