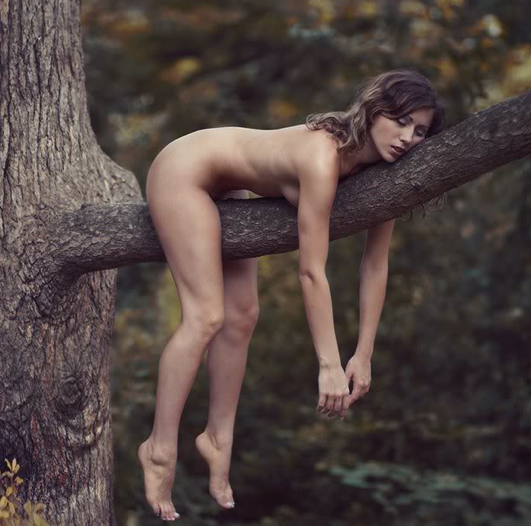 Branching To New Heights – Just In Time for My 50th

Rob Miron, a certified climbing guide, fits a harness around my waist and legs, and we ease our way down an embankment to the base of a Douglas fir that stands alongside an old pioneer trail northeast of Eugene, Oregon.

I look up. Way, way up. I can’t even see the top, but it’s about 250 feet above me. The diameter at breast height (DBH to arborists) is eight feet, so the tree is about 25 feet in circumference. I’ll be the first one up the ropes that Rob and his partner, Jason Seppa, have shot into the tree earlier with a compound bow. This will be the highest I’ve ever been up in a tree, and probably the furthest off the ground without a building around me. A fitting way to celebrate my impending 50th birthday.

My first move, Rob explains, is to sit back in my harness seat and pull the ascender in my left hand – which is connected to my foot straps (which are connected to my harness) ­– up to eye level. Then I stand in the foot straps, pushing my right-hand ascender as high up the rope as I can. And so on. Within a few minutes, I’m up…about a yard. After a few hundred of these I figure, squinting upward, I should reach 200 feet, the first junction of limbs, where we’ll meet for lunch, and where, later, I will sleep for the night in a tree boat. The dinghy-shaped, fiberglass-framed canvas hammocks float in the trees, tied at the broad end to the trunk, with the narrower end (where my head will be) jutting out like a limb.

For centuries, botanists studied forests from the ground. The biggest trees (such as Douglas firs, but especially redwoods, which can be bare of limbs below 250 feet) were essentially unscaleable, and their canopies remained shrouded in mystery – mind-boggling when you consider that the surface of the moon had been explored before botanists began to fully explore the canopies of trees. In the early 1970’s, William Denison, a naturalist at Oregon State University, started jerry-rigging mountain-climbing ropes and bolts drilled into the trunks to get up into the canopy of Douglas firs, and he began collecting samples of fungi and lichen. By the late 1980’s, aided by a system of arborists’ ropes they’d adapted, a number of young botanist/ climbers, including Steve Sillett – considered one of the field’s pioneers –  were scampering around the canopies of the great trees.

What a world they found once they got up there! Redwoods, it turns out, have a capillary system that is unsurpassed, and capable of sucking water up thirty stories from the soil. And, canopy scientists are realizing, a Redwood possesses an unusual ability to extract moisture from a surrounding veil of fog and send this into its branches and trunks. They’ve determined that in any given hectare (2.5 acres) of big-tree forest canopy, there are 25 to 50 thousand  liters of water – veritable “aquifers in the sky.” All of this supports an astonishing ecosystem – virtually half of all species found on earth, scientists now assert, can be found in the canopies of the great trees.  A redwood can host currant and elderberry bushes (bearing fruit!), rhododendrons (blooming! At 150 feet!), and huckleberry bushes – airborne gardens bursting from soil found in the elbows of branches. What’s more, the great trees are also home to wandering salamanders, various crustaceans, and earthworms that spend their entire lives in the canopy.

Happily for me, Teresa Damron, mother of my climbing guide, and a partner in Sperry Tree Care in Eugene, co-founded Pacific Tree Climbing Institute (PTCI) almost ten years ago after her own maiden climb up a giant Douglas Fir in Oregon, a climb she undertook to overcome her fear of heights, just in time for her 50th birthday.

But back to my story: It takes me about 45 minutes to reach 200 feet. The climbing, extreme as it sounds, does not require triathlon training, (you climb at your own pace) though being somewhat fit helps.

“Relax,” I hear Rob (who can tree-frog his way up this tree in five minutes) telling Kristin, one of five climbers coming up below me on their own ropes, and who’d admitted earlier to some fear of heights. “Sit back, look around. There’s no competition.” He says if someone reaches a “personal ceiling” that feels scary, they should stop and get comfortable, then push up beyond the ceiling. Use logic, he says: Ropes are tying us in, and we can’t fall out. I think, Wow, I’m not scared at all. Until, that is, it’s time for me to find a footing in the crotch of the tree and move from my rope across limbs to a tree boat. I get a sudden sick, liquid feeling in my knuckles, toes, and wherever else adrenaline goes. I’m still attached, but the rope is slack, and the freedom feels dangerous. Hugging the tree, I inch around to the other side. Suddenly, I can’t see anyone. Just the South Santiam River, glinting in the valley, a thousand feet below.

When I sit in the tree boat a few minutes later with Anthony, a guy from Eugene, I’m almost euphoric with security. We eat the lunches that Jason’s wife, Debbie, packed; we don’t, however, drink much water. Needing the “loo” presents problems (though not insurmountable ones).

After a couple of peaceful hours in our boats, it’s time to head down. Rob attaches a descender to my line, which acts as a brake, and then I’m scooting down, occasionally touching foot to trunk, controlling my speed through a whirl of leaves and sun, as delighted with gravity (and myself) as I’ve been in years. We hike back to the campsite, where some of the climbers will sleep, and sit around a fire eating ravioli with homemade marinara sauce, followed by Oregon wild berry pie.

In the dusk, Rob, Jason, Kristin, and I return to the tree. I’m pretty exhausted this second time up. I make slow progress, and Rob, climbing next to me, holds his hand against my back so my alignment—as important as strength—allows me some purchase on the rope. Eventually, we get up to 200 feet. Jason zips me into two sleeping bags in my tree boat, harness still attached. It’s too dark to see much (probably a good thing). When I turn my headlamp off, all there is beyond the branches are stars.

Instead of feeling cramped from lying in one position, I feel incredibly cozy. Instead of vulnerable, I feel—surprisingly—very safe. I think about this tree, born here almost a thousand years ago—before Europeans came to America. I think about the “lost continents” in the canopies of big trees, — ecosystems that take centuries to evolve—and the idea that lumber companies think they can replace old-growth trees with new ones.

Soon after, I fall asleep, stirring dreamily a couple of times in ten hours (yes, ten hours). When it’s light, I wake to morning birdsongs from the branches above. I hear Debbie’s voice on the radio, and a few minutes later, Jason scrambles over with a backpack and hands me a hot facecloth. New definition of luxury: Washing my face with a clean, fragrant, hot towel, served to me after a very long sleep in a tree boat, hundreds of feet up an ancient tree I climbed myself.

Branching To New Heights – Just In Time for My 50th was last modified: January 23rd, 2012 by Jamie Stringfellow