There are plenty of highlights from today’s Boston Marathon. One of our favorites is about a BA50 who was the first woman to run it back in 1967.

Here’s what the Washington Post was saying about Kathrine today:

“Among notables in this year’s field is Kathrine Switzer, who will have a much easier time of it than she did 50 years ago when she was the first woman to officially compete in the race. Bobbi Gibb, who competed unofficially the year before Switzer, will be the grand marshal for the Patriots’ Day race.

Fifty years ago, Switzer’s boyfriend had to fend off a race official who sought to physically stop her from running. “I wasn’t there to prove anything,” she said (via the Boston Globe). “It wasn’t until Jock Semple attacked me did everything change.”

Switzer won the 1974 New York City Marathon and has done TV commentary of the Boston race for 37 years. In 2015, she created 261 Fearless, a nonprofit that wants to use running to empower women. (The 261 comes from her bib number in 1974; the BAA has since retired the number, but Switzer is wearing it Monday.)

“What happened to me was a radicalizing experience. And it was one that made me bound and determined to change things for women,” she said. “Running had given me everything, and I wanted other women to feel that as well.” 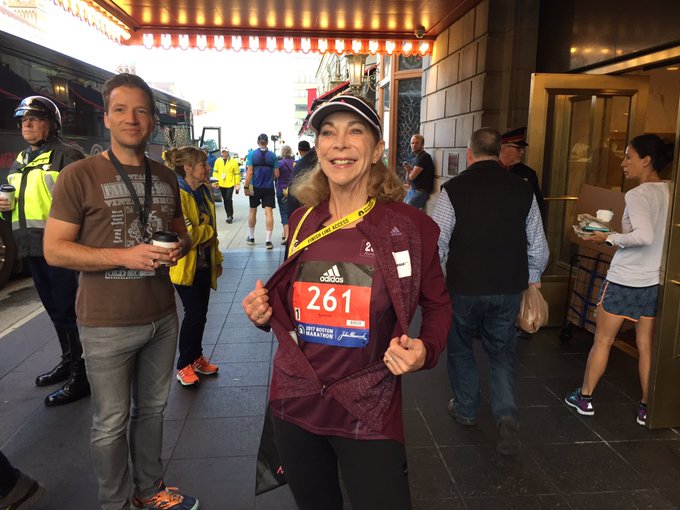 In 1967, Kathrine Switzer was the first woman to run #BostonMarathon as a registered entrant. Today, she’s all smiles before her last 26.2
“Women who are empowered can change the whole society around them for the better and running — I know it sounds crazy — but one foot in front of the other, it’s a transformational experience.”
Click here to read more…