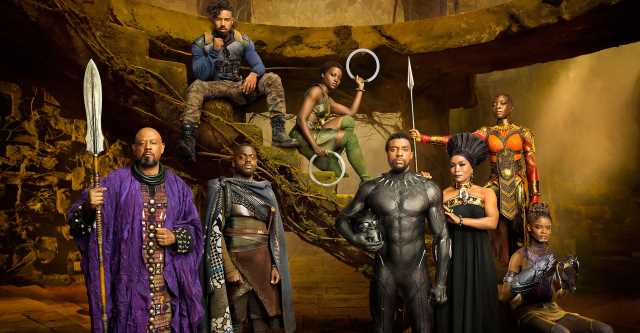 What’s most remarkable about BLACK PANTHER about the latest Marvel superhero to leap to the big screen is not that it had the biggest pre-sale of any superhero movie in history, not that it features a predominantly black cast and writer/director, is well made, acted, scripted, designed, and directed (it is all of those things) but that it has taken until the year 2018 for a black superhero to emerge full blown into the zeitgeist, and be celebrated, embraced, and consumed like ripe fruit ready to burst. Yes, there was 1998’s BLADE starring Wesley Snipes and two sequels, but Blade did not cut it the way this cat has.

Now, a black superhero has arrived from a world which has never been enslaved; the hunger for the power of that dream is palpable, its realization on the big screen, profoundly inspiring. Black Panther hails from the African nation of Wakanda, a technologically advanced sci-fi fantasy land which has evolved separately and apart from the rest of the planet, and is in fact superior in every way.

Hidden by a force field, Wakandans thrive as a beautiful, brilliant, and fierce people, arrayed in resplendent multicolored garb, elaborately wrapped headdresses, their skin pierced and painted with tribal markings tracing their origins back millennia.  Their history has not been deformed by colonialism and cultural appropriation, but they now hover on the cusp of a threat. Their problems hinge on succession, social responsibility, and the redemption of a wrong that has come back to haunt them.

Enter T’Challa/Black Panther –Chadwick Boseman as a sleek and noble avenger who returns home after the death of his father the king, to defend his claim to the throne. He is welcomed by a phalanx of ferocious women: including the luminous Nakia–Oscar winner Lupita Nyong’o as the coolly passionate woman who makes him weak at the knees; the fiery Okoye–dazzling Danai Gurira as the head of the all-female special forces who is as lethal with a lance as she is with a glance. There’s the Queen Mother Ramonda– an intensely regal, Oscar-nominated Angela Bassett; and sharp, wisecracking little sister Princess Shuri– Letitia Wright as a techie who knows her way around “vibranium,” the source of Wakanda’s technological advancement. There’s a funny scene a la James Bond where Shuri shows off her latest hi-tech gadgets to her brother to awesome effect, and shedding light on the source of Black Panther’s powers.

Vibranium is also the object of a plot by arms smugglers led by Ulysses Klaue played by a seething Andy Serkis. (In case you forgot, “vibranium” is the stuff Captain America’s shield is made of!)  The cast is further enriched by deeply felt performances by Forest Whitaker as elder statesman and spiritual leader Zuri, Daniel Kaluuya (“Get Out”) as best friend W’Kabi, and Sterling K. Brown as T’Challa’s uncle N’Jobu. New to me is Winston Duke as M’Baku, leader of a powerful, challenging tribe who provides some of film’s best encounters, combative and comedic!

T’Challa takes part in a ritual involving a purple, glowing herb and inviting challengers to battle him for the throne, but is not expecting the conundrum posed by the unexpected arrival of the swaggering Killmonger– Michael B. Jordan as a deathly determined warrior. Jordan is also a frequent collaborator and star of writer/director Ryan Coogler’s  films–the acclaimed “Fruitvale Station” and “Creed.”

Coogler has given us action that moves at an entertaining clip over considerable ground, introducing charismatic characters and relationships we want to know more about. Punctuated with scenes of mortal combat, family secrets, cool technology, and humorous asides, the film is held together by an evocative score recorded by Senegalese and South African musicians and a kickass soundtrack curated by rapper Kendrick Lamar.

Lamar’s soundtrack orchestrates artists including SZA and The Weeknd and interweaves African beats, percussive ululations, and instrumentation. Lamar’s just-released “Black Panther: The Album” is a separate layer of thematic material that taps the pulse of the audience on its own, as well as propelling the movie’s themes of struggle and redemption from a mythical past to the here and now. Even some the language spoken in the film– the “pop and lock” of isiXhosa –is a real language used by the Xhosa people of South Africa who fought colonial invaders. Nelson Mandela and Steven Biko were Xhosa.

Black Panther was created by Stan Lee (who makes his usual cameo here in the casino scene) and Jack Kirby, two white men who introduced the character during the mid-60’s civil rights movement, filling a cultural blind spot: there were no black superheroes in the Marvel Comics galaxy.

Coogler and co-writer Joe Robert Cole have more than delivered on that creation,  fleshing out a mythology with psychological and spiritual weight, at the crossroads of blood and spirit. The plot carries messianic overtones, shades of biblical trials–old and new testament, while being simultaneously supercharged with modern angst around racism, power, and identity. But most important of all, the film carries a potent vision of the future liberated by an imaginary paradise of a past.

At film’s end we are left with a dilemma: how does the dream survive? Hidden or revealed? At what cost? Stay past the credits for a scene that hints of complications to follow, and a franchise that I hope will continue to leap through the big screen and unflinchingly forward.