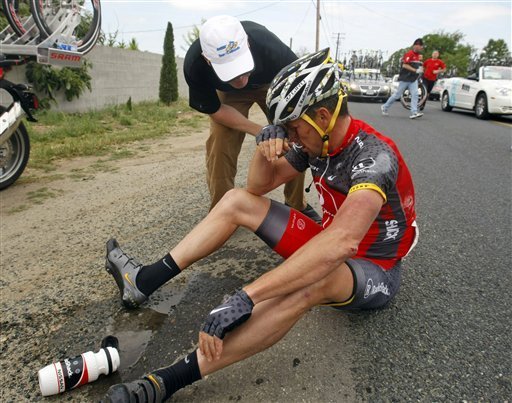 Lance has been teetering from grace for a while but this week he fell off the bike. My Livestrong bracelet is off my wrist until I can create my own separation between the cause and the person.

Lance’s fall has got me thinking about cheating. How is it that a black and white legal rule can be rationalized into a shade of gray? It seems like getting caught is the only deterrent to cheating — at least in Lance’s case. How can that be?

Clearly there is a hierarchy of cheating ranging from outright illegal all the way down the ladder to hand slapping.  The severity of the transgression is defined by the playing field. Professional sports offer more defined rules than recreational sports. However, no matter which playing field one is on, pushing the edges of the rules seems to be a sport in and of itself.

Clearly, the fear of getting caught can be enough to keep one well within the boundaries of the rules unless you believe you are above the law.

As kids we were all taught not to cheat (hopefully). In school, the consequence — FAILURE or EXPULSION…was enough to get me to wipe the penned notes off my hand before heading into a test. The fear of getting caught kept my eyes glued to my math quiz no matter how much I wanted to check out my smarter friend’s answers.

How much are we willing to risk to win? In Lance’s case he obviously never thought he would be caught. So maybe doping didn’t feel risky to him. What does that mean to believe you are above the law, that you are untouchable and that you just don’t have to play by the rules?

For the spectator, we count on those rules being followed. It’s tough to be a cheerleader if you think the game is rigged. How could Lance love biking so much but willingly jeopardize its integrity? Those medals meant the world to biking fans. I for one was a huge Lance fan and cheered him from tour to tour. Now I feel duped. How come Lance’s moral compass didn’t kick in? Didn’t he care about anything but the win? Apparently not — and that is what is so infuriating and sad.

There are so many examples of cheating that go beyond breaking the law. There are plenty of unwritten rules that when broken, we view as cheating. The same outrage sets in when we feel others have ignored these “unwritten rules” because they don’t apply to them.

Unwritten rules allow us to function in the world without the police or authorities getting involved. The problem is they require buy-in from others – everyone must agree on these tacit rules so we can operate smoothly. We know this system doesn’t always work. For instance, as I circled a three-block radius in NYC looking for an on-street parking space, after 30 minutes I spotted a woman standing in a space with her arms stretched wide. I pulled up next to her and asked her what she was doing. She said she was standing in the space to hold it for her husband who would be coming in a few minutes.  “Are you serious?” Finding a parking space in New York City is a survival exercise and there are rules, and we all know them. Humans are not cars and can’t park themselves in spaces reserved for cars. She knew she was wrong but never thought she’d be called out — never thought anyone would question her. She was shocked and nervous as I got out of my car to have this conversation. After much discussion, she walked away, and as I pulled into the space, a small gathering of sidewalk pedestrians cheered me telling me they were sick of these people trying to get away with breaking the parking code of ethics.

It’s infuriating for those of us who believe we are playing fair and square to see someone gaining an unfair advantage.  And frankly I often find myself cheering when the cheaters are caught. You know, the Enron culprits, the CEO’s who are finally busted for pocketing the company’s money, the kids who paid someone else to take their SAT’s — the list is endless.

I thought Lance was better than those CEO’s. I thought he cared about more than himself. His teammates’ secret pact to hush-up their “doping stories” blew up in his face. I am not sorry he has been busted and dethroned. He cheated and unflinchingly claimed his big prizes, strutted around collecting medals and money right up until the moment he got caught. Justice rules: he has been stripped of his medals.

So when we are trying to figure out whether we are doing the right thing, maybe Lance’s story can help us.  Our internal gauge of fear of getting caught should be good enough if we pay attention to it. We know we are in the red zone if our adrenaline gets pumping and we are looking over our shoulder to see who is watching. We don’t need the rules police to tell us what’s right and what’s wrong – we know.   Because ultimately the truth is, if we don’t play by the rules – we’re out!