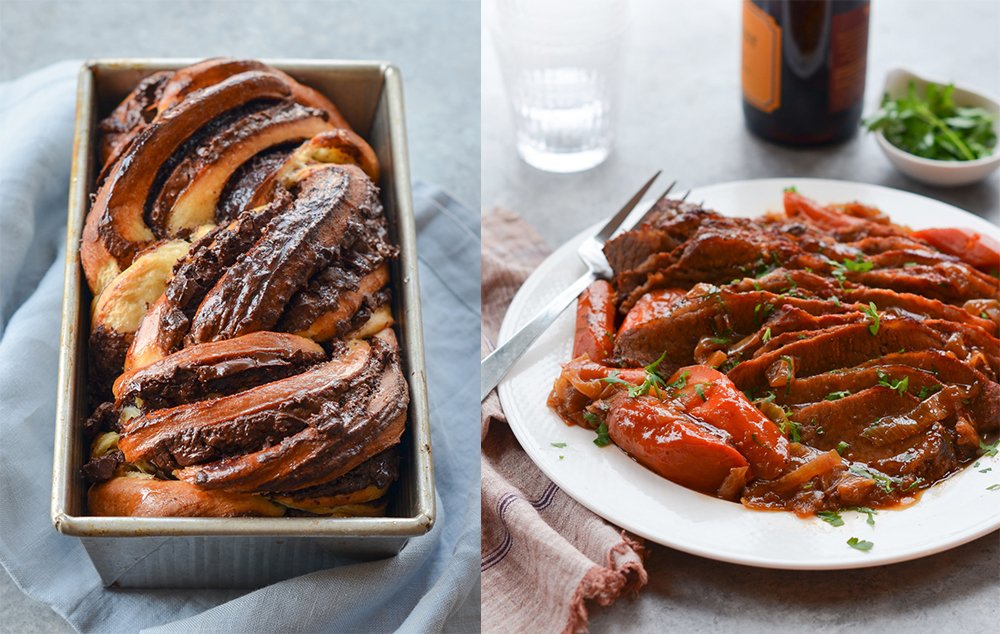 Babka, Brisket, Latkes, Donuts + More for Chanukah From Once Upon A Chef

Sunday is First Night Of Chanukah and Here’s What Once Upon A Chef is Cooking!

We think this looks amazing and just ran to the grocery story to get ready for the Sunday Feast and candle lighting.

Babka is a braided yeast bread or cake that originated in the Jewish communities of Eastern Europe. It is prepared with an enriched bread dough, like challah or brioche, that is rolled out and spread with a sweet or savory filling, before being rolled up, twisted, and baked. Perhaps the most famous babka, after the one mentioned on an episode of Seinfeld in 1994, is sold at Breads Bakery in NYC. It is outrageously good, and since it’s filled with Nutella rather than a homemade chocolate spread, it’s also easy to make at home.

This delicious beef brisket recipe comes from the late Nach Waxman, owner of the beloved New York City cookbook shop Kitchen Arts & Letters. It was originally published in The Silver Palette New Basics Cookbook in 1989, and it is supposedly the world’s most Googled brisket recipe.

Latkes, or crisp onion-scented potato pancakes, are traditionally eaten during the Jewish holiday of Hanukkah, when it is customary to eat foods fried in oil. At any Hanukkah party, you’ll likely find an apron-clad Jewish mother standing at the stove frying and serving up latkes. This tradition can be fun, but it can also be messy and hectic with hot oil splattering all over the stove and children running underfoot. That’s why I was thrilled to discover that latkes can also be fried in the oven! This recipe offers the option of using either the traditional stovetop method or the oven method. Your choice! Serve them warm with sour cream and applesauce.

A cross between a beignet and a jelly donut, sufganiyot are pillowy donuts eaten in Israel and around the world during Hanukkah. Sufganiyot are traditionally filled with jelly or jam, but if your crew doesn’t care for jelly in their donuts (my son once described biting into a jelly donut as “a terrible surprise”), the filling options are limitless — custard, Nutella, pudding, pumpkin butter, apple butter, or dulce de leche are all great options.

Babka, Brisket, Latkes, Donuts + More for Chanukah From Once Upon A Chef was last modified: December 15th, 2022 by BA50 Talkers