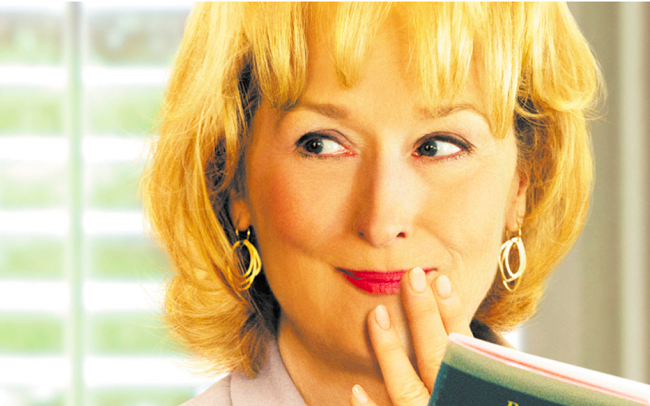 BA50 at the Movies: Hope Springs

I never would have considered casting Tommy Lee Jones as the lead male opposite Meryl Streep in a romantic comedy, and that’s probably why no one is hiring me as a casting agent. The craggy-faced Jones is perfect in “Hope Springs” as the cantankerous half of a sixty-something couple whose marriage is desperately in need of a shot of adrenaline. The only problem is that the movie is neither the rom-com I assumed it was, nor the comedy it is being advertised as. Despite hearing lots of chuckling from the
audience throughout most of this film, I think some of that was nervous laughter, since I found much of “Hope Springs” to be a serious adult drama about dealing with intimacy, and the lack of it in a relationship.

Kay (Streep) and Arnold (Jones) Soames have just celebrated their thirty-first wedding anniversary and while Arnold seems content with the rut they are in (not only do they sleep in separate beds, but those beds are in separate rooms), Kay decides their marriage needs some added spice; more like an entire spice cabinet. “It’s like being married to ESPN,” she complains. With great difficulty, she manages to get Arnold to trek with her to a small town in Maine for a week-long therapy session with renowned marriage expert, Dr. Bernard Feld. The doctor, played by Steve Carell with sensitivity and grace (if anyone is expecting him to be funny in this film, forget it–he’s not), works with the couple on such an intense level, that I felt myself squirming in my seat almost as much as Jones was doing on the sofa in the film. Watching him and Streep trying to go through the act of peeling away their clothes, as well as years of behavior that led them to this point in their marriage was downright painful. Not because it was unpleasant to witness, but more so because it was sad to witness.

The film, directed by David Frankel, who also directed “The Devil Wears Prada,” is more like a primer for couples interested in therapy. So much so, that the official movie website contains an “instructional manual for husbands and wives interested in keeping their marriage in bloom.” Director Frankel has played it safe by incorporating enough light material into this film so that the commercials can label it a comedy, but he also puts forth a glimpse into how complex and deep-rooted some marital issues can be, and how arduous a task it is to solve them.

There are some lovely cameos by Elizabeth Shue and Mimi Rogers, and I wish their talents could have been used to a greater degree. But the film belongs to Streep, Jones, and Carell. It is admirable of the studio to produce a film that would appeal to those of a “certain age.” I’m sure there is lots here that those earliest Baby Boomers, now in their sixties, can relate to. But if they are expecting to enjoy a light romp of a film, rather than one that will bring many a lump to the throat, this one is not for them. It is smart and amusing, with a few surprises thrown in for good measure.