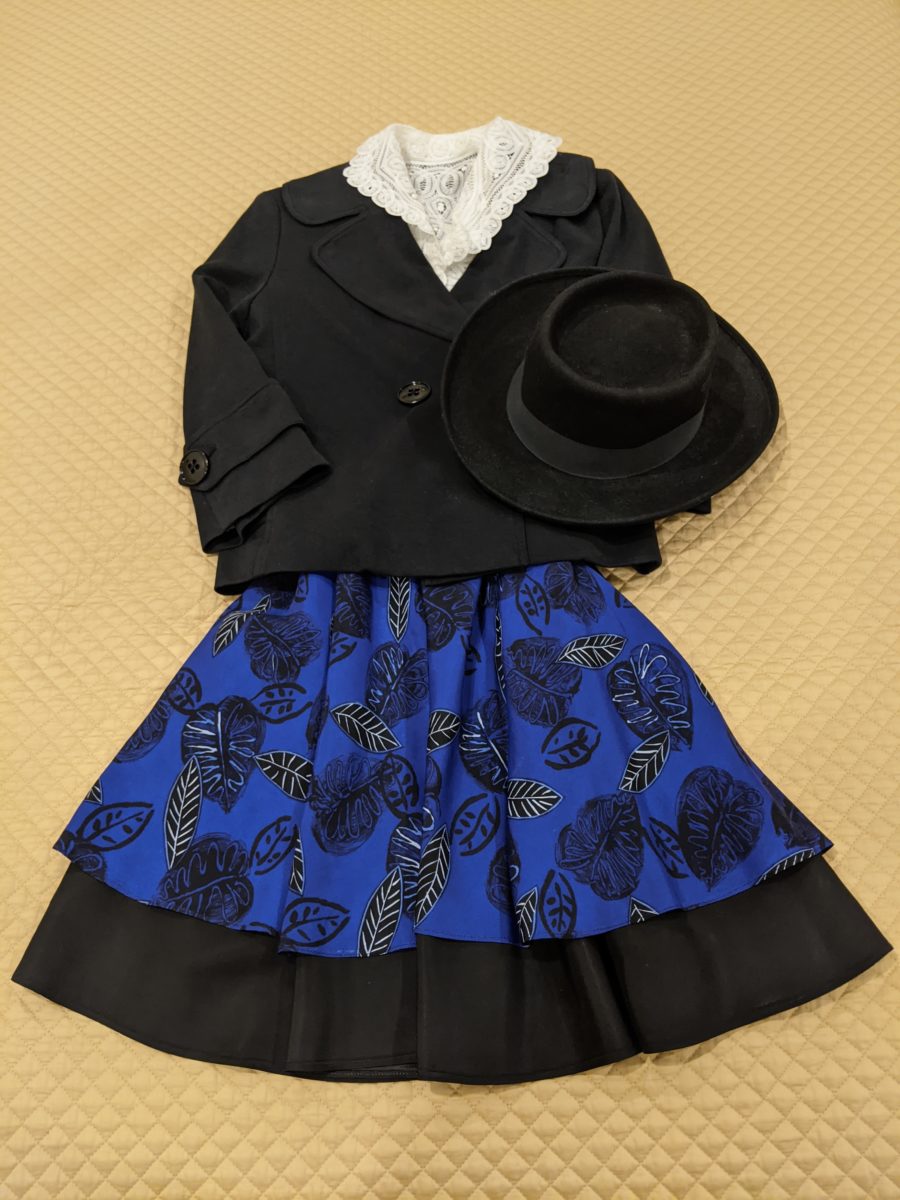 Annie in Brussels for Vogue

Everyone has an outfit in their closet that they don’t wear anymore. It might be too small, out of style, or damaged. But the memories are just too dear to discard.

My purple skirt adorned with black-and-white flowers falls into that category. It’s “haute couture,” designed and custom-made for me. I wore it to my first runway show in Brussels (Dior, no less).

I first spotted the tiered skirt in “Vogue” magazine. The model sported a black hat, a white shirt, a trim jacket, and a flowing patterned skirt. I had a similar hat, shirt, and jacket in my closet already. Headed for Europe in two weeks, I didn’t have time nor funds to shop for the high-fashion skirt. I consulted my personal seamstress: “Marucci,” a.k.a Mom.

“Sure, no problem,” said Marucci. She had grown up in Ossero, a town with a drawbridge that straddles two islands in Croatia. When her own mother was born here, the town was part of the Austro-Hungarian Empire. By the time Marucci arrived, Italy had taken over. After Americans bombed the bridge in WWII and liberated the town, Tito’s Yugoslavia moved in. Today, Croatia owns the town, rechristened as Osor. In the process, my mom grew up multi-lingual. Exposed to diverse educational systems, she studied five languages, including Russian. She would become a teacher, the first of her family to graduate college. As a teen, however, when marriage appeared the more likely course, Marucci crossed the bridge for daily sewing lessons in Tarzic, a cluster of five houses. Well, on the days when her father could spare her from the farm.

In 1957, my mom escaped rural life and oppressive communism via Italy. She came to the United States when a quota opened for Slavic refugees. Cousin Stella, her own parents Czech immigrants, pulled together old clothes for this incoming relation. Stella filled a sack, and the family went to meet the RMS Homeric.

Marucci strode down the gangway with the 1st-class passengers (cousin Carmelo, former mate on the ship, had had her passage upgraded). She wore a dark green coat of bouclé wool. Her auburn hair gleamed in the sun. She had green leather shoes, a matching handbag, and dangling gold bracelets. Stella thought she looked like Melina Mercouri, the Greek actress. She left the “hand-me downs” in the car trunk.

My mom made all my clothes when I was growing up. I was the best-dressed kid in the neighborhood. Eventually I moved to jeans and sweaters like my peers in school, but when I needed a fancy dress for a wedding or prom, she fashioned it perfectly. These clothes were too well-crafted and special for Good Will so most of them were passed on to my cousins. (Except for that purple skirt.)

We chose the floral fabric and onyx lining for the garment together. Marucci overlaid two wide shells of cloth. A few inches of the inner level glimmered at the bottom. She gathered the waist under a panel belt. After fittings and adjustments, she hemmed the two layers. I twirled around like a folk-dancer.

I took my tailored ensemble to the streets of Belgium. Marucci’s gold bangles, my own leather bag and designer shoes finished the look. It was as if I’d stepped out of the magazine as the model. I swished to cafes, museums, and discos. I was young, thin, and dazzled with the confidence that comes from perfectly fitted clothes. Admiring glances and compliments met my every turn.

That was my Vogue moment, and it’s never leaving my closet.

Excerpted from the author’s book in progress: “Marucci’s Memoirs: as dramatized by her daughter Aurora.”

Annie in Brussels for Vogue was last modified: October 25th, 2020 by A.M. Brako