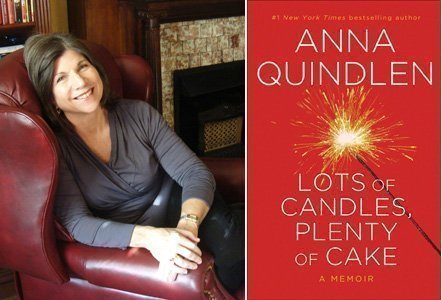 Excerpted from Lots of Candles, Plenty of Cake by Anna Quindlen

Every once in a while we meet our long-ago selves across a dining table or a desk, when younger women come to ask for advice or to interview for a job. They’re so eager and so smart with their dresses and their shiny hair, and we know exactly what they want because we once wanted it too. They want a formula: Connect A to B, C to D, and in the end, there it is, the life you crave. The job, the salary, the companion, the home.

It’s so hard to tell them the truth, that there is no formula, no plan. It’s harder still to communicate that your life has been filled with accidents and that they have determined so much of how things turn out. Some have been happy accidents, some not. There were plans for a family but the right partner didn’t come along, or came along too late. There were plans for a big family but after the first child there was no other, or plans for an only child that were changed by an accidental pregnancy.

It often seems, looking back, that so many of our plans are honored mainly in the breach, that it is the surprise that define us, the paths we didn’t see coming and may have wandered down by mistake. The older we get the more willing we are to follow those, to surprise ourselves. After all, all we can do is fail, and failure loses so much of its sting over time. We not only know how to fail, we know how to get up.

Failure is so terrifying to the young.  So is unpredictability. They’re afraid they’ll get it wrong. You have to use cookbooks for a long time before you realize that you can leave out the beans, throw in some tomatoes, substitute rosemary for basil, try something different.  Sometimes the improvisation is better than the original recipe, sometimes just as good, and sometimes you pour it down the disposal and make a nice fettuccine Alfredo.

Eleanor Roosevelt once famously said that it was important to do something every day that scared you, and it’s a pretty good piece of advice.  But it’s more challenging when you’re older because you’re afraid of fewer things, certainly fewer of those small everyday things that I think Eleanor meant. The things we fear now supplant asking for a raise or inviting a stranger for dinner. They are more cosmic, more philosophical, about a more difficult and dependent future. Perhaps instead of scaring ourselves we need to surprise ourselves every day. We are, after all, always a work in progress.

There were things I hadn’t done, didn’t know, couldn’t imagine at fifty that have all come true in the last decade. There must be such things in the decades to come as well. They arrive not because of the engraved invitations of careful planning but through happy happenstance, doodles on the to-do list of life.