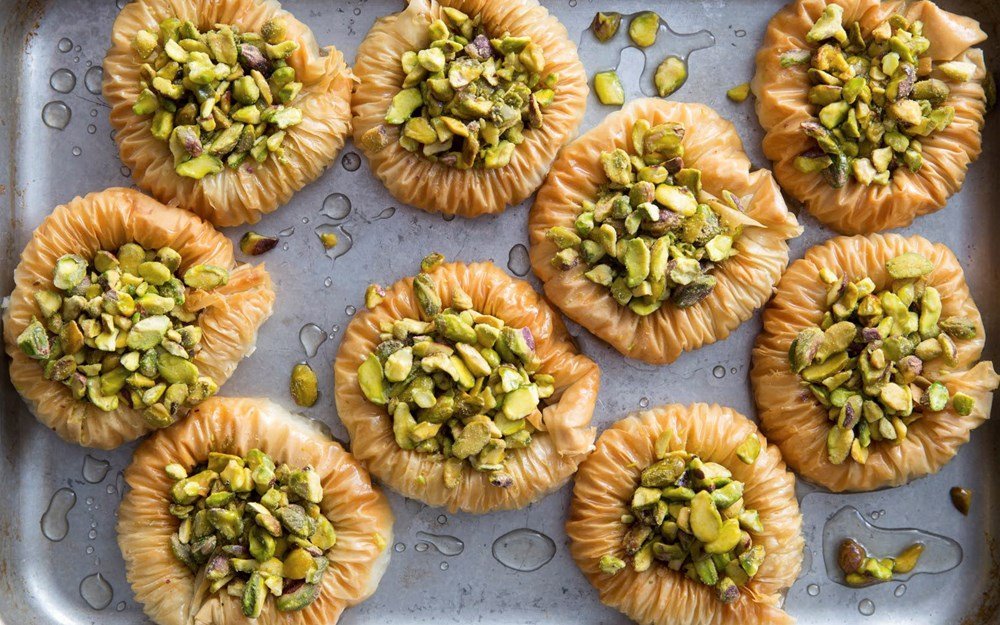 Ana Sortun and Maura Kilpatrick have traveled extensively throughout Turkey and the Middle East, researching recipes and gaining inspiration for their uber-popular cafe and bakery, Sofra. In their first cookbook together, the two demystify and explore the flavors of this popular region, creating accessible, fun recipes for everyday eating and entertaining. With a primer on essential ingredients and techniques, and recipes such as Morning Buns with Orange Blossom Glaze, Whipped Feta with Sweet and Hot Peppers, Eggplant Manoushe with Labne and Za’atar, and Sesame Caramel Cashews, Soframiz will transport readers to the markets and kitchens of the Middle East.

These recipes have been Reprinted with permission from Soframiz by Ana Sortun and Maura Kilpatrick, 2016. Published by Ten Speed Press, an imprint of Penguin Random House LLC.  Photographs copyright © 2016 Kristin Teig

Borek is a pie or pastry that probably originated in Eastern Europe and came to Turkey with the Ottomans. It is made with yufka dough, a thin, almost phyllo-like pastry. There are numerous varieties of borek; some are filled with meat, others with cheese, and still others with vegetables. Borek can be rolled, folded, stuffed, twisted, or layered in a baking pan, like this one. This recipe is called su borek, which means “water pastry,” probably referring to the boiled-noodle texture resulting from layering and soaking the pie in yogurt and egg until the center becomes almost like a kugel, lasagna, or dumpling, while the top becomes crisp. I prefer to use store-bought yufka in this recipe because it is thinner than both of the yufka recipes in this book. If you want to make it yourself, use the recipe given on page 19 for katmer and roll it out as thin as possible. If you have leftovers, cut the cold borek into small pieces and crisp them in a pan for a perfect afternoon snack or breakfast item. ANA

Preheat the oven to 425°F. Butter an 8-inch square baking dish or an 11 by 7-inch baking pan with 1 tablespoon of the melted butter.

In a small mixing bowl, whisk together the milk, yogurt, salt, and whole eggs until very smooth. Whisk in the remaining 7 tablespoons of melted butter.

Cut the yufka so that you have about eight large pieces that cover the bottom of the pan. It’s okay if they don’t fit the pan perfectly or if the edges hang over; you can fold everything over the top at the end of assembling.

Using a small knife, cut the borek, scoring the pastry so that the custard seeps into the cuts. Make 10 to 12 cuts. It doesn’t matter if it breaks up the pastry; you can press it back down with your hands. You don’t need to worry about doing it neatly; the cuts will disappear while the borek bakes.

Mix the remaining milk mixture with the egg yolks and flour. Pour over the top and let soak for 20 minutes. Eventually, the liquid soaks into the pie, so don’t worry if it seems like a lot. Sprinkle the top with the nigella seeds.

Place the borek in the oven and lower the heat to 350°F. Bake for about 50 minutes, until golden on top and puffy. Let rest for 15 minutes before slicing and serving.

This syrup-soaked semolina sponge cake is known as revani in Turkey and Greece, but other Middle Eastern countries have similar versions. This cake is a lovely dessert, but I also love it served with fruit and yogurt as breakfast. MAURA

Put the flours, baking powder, baking soda, and salt in a bowl and whisk to combine. Set aside.

Combine the yogurt, lemon zest, and vanilla in another bowl. Set aside.

Combine the eggs and sugar in the bowl of a stand mixer fitted with a whisk attachment. Whip on medium speed until pale yellow and tripled in volume, about 5 minutes. Lower the speed to low and slowly pour in the canola oil. Add the yogurt mixture in two additions. Scrape down the sides of the bowl. Add the dry ingredients and mix until just combined. Fold by hand with a rubber spatula until the batter is smooth.

Pour the batter into the prepared pan. Bake until a toothpick inserted in the center comes out clean, 35 to 40 minutes.

Prepare the syrup while the cake is baking. Bring the water to a boil in a small saucepan. Remove from the heat, add the tea leaves, cover, and let steep for 5 minutes.

Strain and discard the tea leaves. Return the liquid to the saucepan and add the sugar and lemon juice; bring to a boil. Lower the heat and simmer for 8 minutes, until reduced to 11⁄4 cups.

As soon as the cake is out of the oven, pour the hot chamomile syrup evenly over the cake. Set the cake aside to cool and absorb the syrup completely. Invert the cake onto a platter to hold the syrup.

Slice and serve with a spoonful of yogurt and chopped pistachios.

About ANA SORTUN and MAURA KILPATRICK:  Ana graduated from La Varenne Ecole de Cuisine de Paris and opened Oleana in 2001, immediately drawing raves from the New York Times. She was awarded the Best Chef in the Northeast by the James Beard Foundation in 2005, and opened Sofra in 2008. After receiving a graduate certificate in baking at the California Culinary Academy, MAURA KILPATRICK moved back to her hometown to work for many of Boston’s top chefs. In 2001, she worked with Sortun to develop the concept for Oleana, followed by Sofra in 2008. Kilpatrick has earned several nominations from the James Beard Foundation for Outstanding Pastry Chef and the title of Boston’s Best Pastry Chef from Boston magazine.