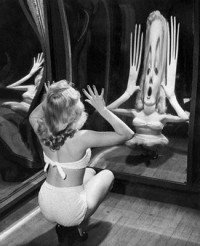 Have you ever noticed how Betty Crocker and Aunt Jemima seem to get younger all the time, while Uncle Ben and Colonel Sanders are left alone to grow gray and sport the wrinkles age and experience have earned them?

Do you ever mull over why women, at the prime of their lives, when they’re  finally blessed with an enhanced sense of identity, the ability to make positive contributions and a renewed sense of confidence, talk obsessively of tucking, peeling, injecting,  plumping, realigning, augmenting and suctioning themselves into something closer to physical perfection? What ever happened to beauty everlasting? Is it true instead that beauty is only skin deep?

A friend of mine who has joined me in endless discussions of revolting thighs, shapeless breasts and hideous upper arms, recently answered her first personal ad. Something in the way this particular man described himself intrigued her and gave her the courage to write back. She worked hard on her answer and I have no doubt that the qualities that make her a successful attorney, a stupendous mother and a funny, compassionate friend came across in her reply. When three weeks went by and she hadn’t heard from him, she said, “At least he didn’t ask for a picture. I would have been more upset if I’d sent one and then he didn’t call.” Sure, this way he only rejected her essence, her soul, her wit. That was O.K. Because he didn’t pass her up on account of how she looked.

Otherwise strong, assertive women are crushed if they’re told they resemble someone they think is unattractive (or older) than they are. Criticize their work, their religion, even their families, and they’ll let you have it. But attack a woman’s looks and she’s beyond reason… she’s devastated and defenseless. Once, years ago, a guy told me at a party that I reminded him of Roseanne Barr. He was just making conversation and had no desire to hurt my feelings and scar me for life. He didn’t see it as an insult. It wasn’t even a fact (ask my friends). It was just his interpretation. (And why later, I put her picture on my fridge to keep me honest.)

You would think that since we’ve come such a long way baby… so much farther down the road from being an ornament and so much closer to earning our status as equal intellectual, even financial, partners, that we could make the transition from lean and strong to soft and round without great penalty.

We BA50s are so vain we even care about the opinion of those we don’t know. Only 32% of baby boomers polled recently by Lou Harris favored allowing nature to take its course. Thirty-nine percent felt nothing was wrong with plastic surgery. Three quarters thought they looked younger than their age, and eight out of ten thought, as our generation’s vanity rears itself absorbed head, that they showed fewer signs of facial aging than their peers.

As one who belongs to the Lillian Hellman School of Skin Care, I find all this discussion unnerving. How fair is it that only 1.3 percent of men surveyed by Men’s Journal wished they were more attractive? So I’m left taking comfort from the fact that Russian women are most likely to have sex every day. How taut are they?  I believe that the more you tell the truth, the better you’ll age. And I firmly adhere to the last words in the last column Erma Bombeck ever wrote. “My deeds,” she said, “will be measured not by my youthful appearance, but by the concern lines on my forehead, the laugh lines around my mouth, and the chins from seeing what can be done for those smaller than me or who have fallen.”

I’d live more comfortably in her skin than Raquel Welch’s any day.

Am I Attractive? was last modified: March 20th, 2012 by Marcia Byalick