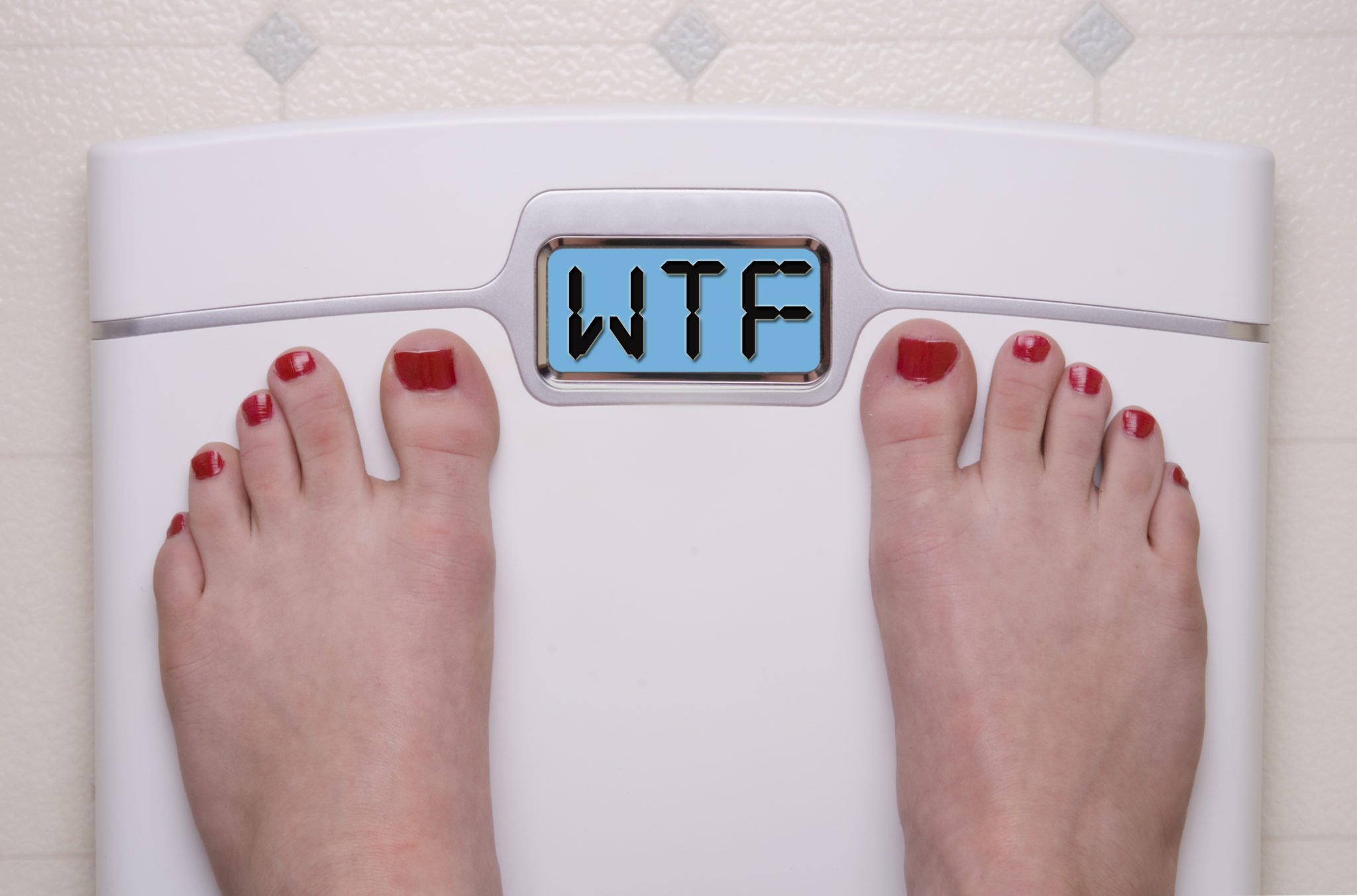 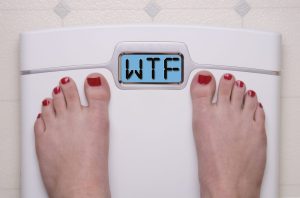 I was in middle school when I started to become aware of my weight. In hindsight, looking at photos, I realize now that I should have worn the bikini. By virtue of my youth, I looked great. But at the time, my awareness was limited to how tiny and thin other, more popular girls were. The boys hovered around them like bees to clover. They weren’t necessarily prettier than me. They were just thinner.

I got the message.

I grew up with a slender mother and a little sister who wore a size zero if you hosed her down first and weighed her in her soaking wet clothes. My father used to refer to her as the “little one,” and I was always the “wholesome one.” Yeah, that was what a 15-year-old girl wants to hear. For years I viewed myself as a Swedish butter churner. Big bones and strong arms, yodeling my way through my domestic chores.

I learned early that the scale was all-powerful. It could make or break a day simply by a spin of its dial. Round and round it would go, until it stopped at a number that had the potential to instantly destroy your mood for the next 24 hours, even on your birthday. (In my later years, especially on my birthday). I hated that scale, but I could never walk away from it. It defined me. And I was never good enough.

The men in my family always assured me that I looked “fine” (another word that teenage girls love to hear), but they lacked any credibility on the issue of weight when they would trip all over each other to flirt with a pretty, thin girl within their range of sight. They said they liked women to have curves and “something to hold on to.” They appeared to lust after swizzle sticks, preferably attached to something called “hooters.”

So I tried to lose weight. Since it was diametrically opposed to my natural build, it became a lifelong struggle. I tried every diet known to womenkind. I tried fasting, low-carb, no-carb, Jenny Craig, Weight Watchers, the Cabbage Soup Diet, Nutrisystem, laxatives, calorie counting, no sugar, no dinner…and on and on it went. Nothing worked. Mother Nature had spoken. She didn’t care about my self-esteem (or lack thereof) or cultural trends. I was born into a generation that revered thin women, and I was built like a curvy hobbit.

As time went by, I learned to hide this confidence crisis, rarely speaking about my insecurities and failed attempts to reshape my body into a rectangle instead of a pear. My curves made me feel weak and undisciplined. People would say “If you want to be thin, just eat less.” (Like that never occurred to me.) Or “Nothing tastes as good as thin feels.” (So not true.) Or, my personal favorite, “If you wanted it badly enough, you’d be thin.” Those people were invariably genetically skinny. And idiots. Most women have “eaten less calories” to the point of starvation at least once during their dieting years and we can tell you it doesn’t work. It tends to just make us feel tired. And extremely bitchy.

For most of my adult life, I weighed between 125 and 135. I dreamed about weighing 110, but that number sailed by during every morning weigh-in at lightening speeds that were just a blur. I thought that 110 would somehow magically perfect my life, bringing me an abundance of admiration and success. Like winning the lottery, but better, because I would appear disciplined, in control, beautiful. This hope-try-fail, hope-try-fail became a pattern I lived with for decades.

Then I got sick.

First there was an inexplicable drop to 120 that wasn’t a result of any effort on my part. It was a particularly stressful time in my life, so I happily wrote it off as a positive occurrence at the end of a storm.

Then I went through the months-long burst appendix saga (“Wake Up, Here’s Something to Help You Sleep,” and Other Hospital Oddities), and my weight plummeted to 99 pounds. At 60, I finally achieved my goal. I was skinny.

I’ll admit here there were times of glory. Whenever someone would say “You’re too thin, sweetie” or “You need to eat something,” I’d do a secret happy dance in my mind. I would always think, “Can you repeat that?” (About fourteen times?) But then when I’d look in the mirror, I’d see an old woman looking back at me. She was rail thin, with a protruding rib cage and elbow skin that hung down like bat wings. The lines on my face looked dry and deep. Hubs began referring to me as “the Kennewick woman.” I looked and felt frail. And I was tired. All. The. Time. After a few weeks, I could no longer deny that this skinny thing was not working for me.

I was no longer wholesome and healthy. Everything familiar about my body was gone, and I missed it. Hubs complained daily about my lack of curves. He frequently commented on my MIA sexy, female curves, and was most emphatic that he wanted them back. He preferred the strong, energetic, old me. Weirdly enough, so did I.

Hubs and I agreed that 125 was my best weight. It felt like a natural set point, and I became determined to gain back what I had lost. Not just the weight, but the self-confidence from knowing you look…yep, wait for it…healthy, strong, and, oh my God, wholesome.

My girlfriends tell me they’re jealous that I need to gain weight. They invariably offer to give me some of theirs. I look at them and think “Don’t you know how beautiful you already are? Don’t change a thing.” At 125, I was beautiful too. Because I was strong. I was vibrant. I was curvy, and Hubs loved it.

My new goal is to never diet again. I’m going to gain back 20 pounds and celebrate it with a big cake, with all my curvy, beautiful girlfriends and a case of fabulous red wine. Often Hubs’ famous chicken & dumplings one evening (and after the third glass of wine), I struck a bet with Hubs that I would throw out my scale when I hit 125. It’s double or nothing if I can not pick it out of the dumpster the next morning. Ha. I am woman. We get it done.

All I Wanted Was To Lose 10 Pounds And Now I Regret It was last modified: May 18th, 2017 by Vikki Claflin