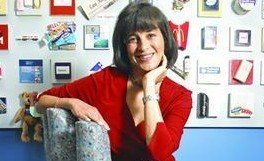 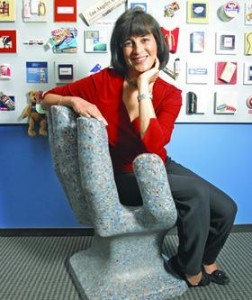 My great grandmother was the first woman in her Pennsylvania town to drive a car. She was also an entrepreneur, running a small dress shop, and at one point, she was the sole breadwinner in her family — and that was in the 1920s. I never met her, but I cannot tell you how much I have always loved hearing about her. I pictured her zipping down the roads in a gold convertible, her hair pulled back, and her eyes shielded by big sunglasses, with a streak of red lipstick on her mouth, term sheets and adding machines on the passenger seat. Later in life, someone asked if I wanted to see an old photo of her, and I declined. I already had her picture in my head. I already felt her genes “inside” me. I was descended from a Trailblazer and it was better than hearing my family had been on the Mayflower, better than hearing I was actually a Princess. I would be just like her — not the real person, but the image I had created in my mind.

Over the years, whenever I encountered a strong woman, my great grandmother’s spirit was with me. She’d whisper, “Now THAT’s an interesting lady. I wonder what HER story is.” And I would lean in. I watched my grandmother fix our roof by fearlessly climbing a tall ladder and crawling around, looking for the leaks. I noticed how my mother pushed forward when at age 58, she lost my dad and had $4100 in her bank account.

So, when my 4th grade teacher, Mrs. Place, asked me whether I was strong enough to memorize the Gettysburg address and say it in front of the school, my ancestors stood next to me as I said I could do it. When Gloria Steinem came to Boston, I ran to soak up her every word. When Anne Jardim and Margaret Hennig wrote The Managerial Woman, just as I was graduating Harvard Business School, I believed they had written the most profound leadership book of all time, which inspired thousands of us to reach for the stars. And, two months ago, when I met Anne Jardim at a small dinner party, I had the privilege of telling her that. Now I get to watch my great grandmother’s genes flowing through my daughters Lindsay and Amanda, as they face their own obstacles with courage and boldness.

When people ask me about my career, about being an entrepreneur, about raising venture capital, about how Communispace almost didn’t survive, or about building a fast-growing company, I usually say that life is long. We all have so many chapters, and over time, the fun is in the journey and in having the strength to believe that anything is possible. It’s in zipping down the roads in our gold convertibles — and in learning that leadership is less about getting others to follow you and more about inspiring others to be better drivers than you are.

Join the conversation! This year, The Ad Club and Allen & Gerritsen have put together a Women’s Leadership Forum survey on the challenges women face in business today. This is your opportunity to provide insights from your own career, help guide others, and even be entered in a drawing to win an Xbox 360! Take the survey HERE!

Strong Enough was last modified: May 21st, 2012 by Diane Hessan